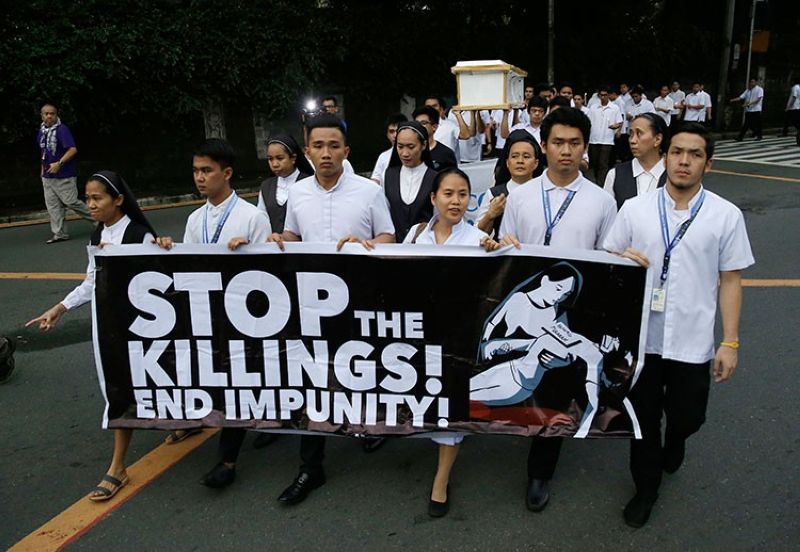 MANILA. In this August 29, 2018, file photo, seminarians and nuns carry slogans and a mock coffin during a rally in Manila, Philippines, against drug-related killings and martial law. (AP)

GENEVA -- Human Rights Watch is calling on the UN’s top human rights body to launch an independent investigation into the Philippine government’s drug war that has left thousands dead, pointing in particular to its harmful effects on children.

The advocacy group made the call alongside Wednesday's (May 27) launch of a report timed for the UN-backed Human Rights Council session next month.

The report highlights the distress and economic troubles faced by many children whose family breadwinners were killed in the violence over nearly the last four years.

The 48-page report is based on nearly 50 interviews and examines the impact of about two dozen killings under President Rodrigo Duterte’s drug war.

Some children have been forced to drop out of school, to go to work, and even live in the streets as the government doesn’t offer a program to support children left behind by such killings, the rights group said.

“Filipino children have suffered horribly from President Duterte’s decision to unleash the police and their hit men against suspected drug users,” the group's Philippines researcher Carlos Conde said. "The government needs to stop this endless violence that is upending children’s lives and direct assistance to the children harmed."

Duterte and Philippine police officials did not immediately comment on the report but they have insisted in the past that suspects were gunned down after they fought back during arrests or raids. The Philippine government maintains it has no policy condoning extrajudicial killings.

Duterte, however, has openly threatened drug traffickers with death and encouraged suspects to be shot when they threaten the lives of law enforcers.

The Philippines’ record is expected to come up at the June Human Rights Council session in Geneva -- if coronavirus conditions permit, based on an assessment by Swiss authorities. Human Rights Watch is calling for an independent international inquiry into the killings.

The Philippines is currently one of the council's 48 member states.

Duterte’s government pulled out of the International Criminal Court after it opened a preliminary probe in February 2018 into complaints about the killings. (AP)