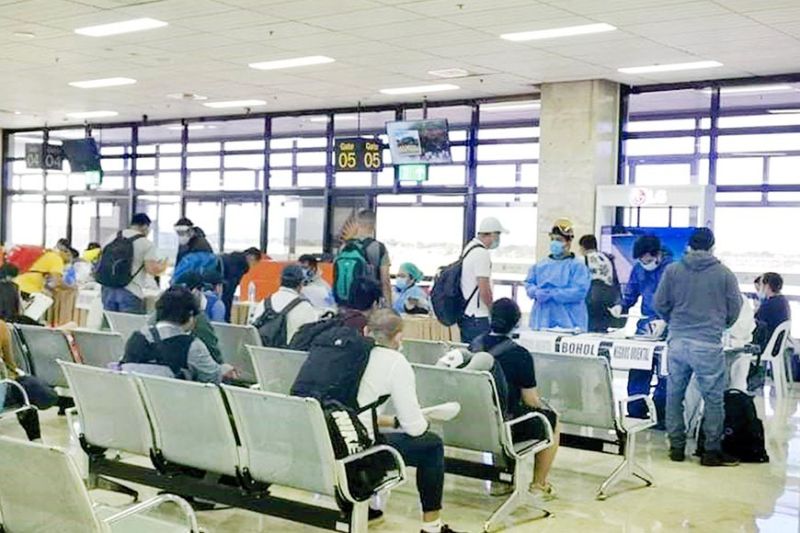 YOUR RESIDENTS, YOUR EXPENSE. More than 600 repatriated overseas Filipino workers (OFWs) arrived on three flights at the Mactan-Cebu International Airport on Monday, May 25, 2020. A supplementary advisory from the Department of the Interior and Local Government has now ordered local government units to shoulder the costs of isolating and testing for Covid-19 the OFWs that arrive in their areas. (Contributed photo)

The DILG supplemental advisory states: "Just in case that the OFW has incomplete or no documents on hand, the LGU may quarantine him/her or (conduct) reverse transcription polymerase chain reaction test and isolate him/her while waiting for the results.”

Chan opposed the latest move by the DILG, saying the City's funds are not enough to fulfill such role amid the crisis brought about by the coronavirus disease 2019 (Covid-19).

“Wa na mi kuwarta, uy. Asa mig kuwarta? Naa mi ibayad sa hotel (We don't have enough money. Where can we get the money? Do we have enough funds to pay the hotel)?" he said.

Chan said they even pulled out asymptomatic patients from the hospital and transferred them to the isolation facility so the City can save money.

Chan said it had been agreed that the Overseas Workers Welfare Administration (Owwa) will take care of the repatriated OFWs who were stranded in Metro Manila because of the lockdown. Thousands of overseas workers returned home after they lost their jobs abroad as their employers closed their businesses amid the Covid-19 pandemic.

He called out the Owwa, which promised to take care of the OFWs arriving at the Mactan-Cebu International Airport in Lapu-Lapu City.

Chan said that based on the protocol the OFWs must present their certificates that they are negative of Covid-19. The lone responsibility of the LGUs is to fetch the OFWs and transport them back to their residences.

The mayor said he received reports about some OFWs who had arrived at the MCIA with no document.

Año said the OFWs were already tested negative of Covid-19 based on test results they obtained after undergoing a 14-day mandatory quarantine.

He said LGUs are allowed to impose additional quarantine. The areas with zero Covid-19 cases could impose a strict quarantine for returning OFWs, Año said.

LGUs implementing stringent measures could not be blamed as they are only protecting the public health, Año said.

However, Año said this does not mean that LGUs can deny entry to returning OFWs who had undergone quarantine.

Meanwhile, the Department of Justice said local officials who impede the return of repatriated OFWs back into their hometowns may face prosecution.

In a message to reporters, Justice Secretary Menardo Guevarra said President Rodrigo Duterte has already given instructions to all LGUs to accept the returning 24,000 OFWs to their hometowns.

"If LGU officials continue to defy this directive, they may be held administratively and criminally liable for violations of the Bayanihan to Heal as One Act (Republic Act 11469)," Guevarra said.

The law authorizes the President to exercise powers necessary to carry out urgent measures to meet the national emergency related to Covid-19.

He added that violations under the law enacted last March are prioritized by the prosecutors.

"I have already given instructions to the National Prosecution Service to give priority to the investigation of any and all cases related to the implementation of the Bayanihan Act and the various measures taken by the government pursuant thereto," he said. (FVQ)