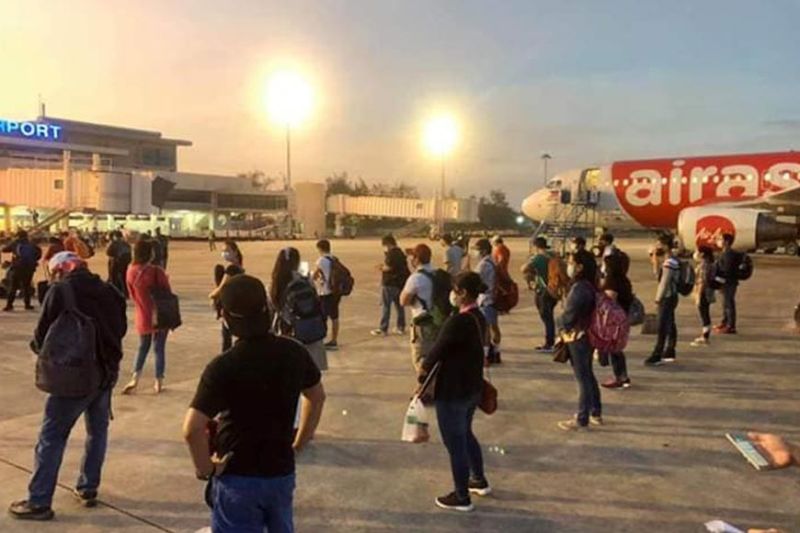 BACOLOD. At least 111 repatriated overseas Filipino workers from Manila arrive at Bacolod-Silay Airport at 6 p.m. Tuesday, May 26, 2020 via the Air Asia Sweeper Flight. Of the repatriates, 71 are from the different cities and municipalities in the province and 40 from Bacolod City. (Capitol PIO)

THIRTY of the 104 overseas Filipino workers (OFWs) who arrived Tuesday night, May 26, refused to be brought to the Provincial Healing Center in EB Magalona.

Charina Magallanes-Tan, Covid-19 Incident Command Center spokesperson, explained that their problem is the lack of coordination of concerned government agencies.

She said they were informed that 104 are arriving so they arranged 50 rooms at GoHotels thinking that half are from the province and half from Bacolod City.

Upon arrival of that numbers, children and women were given priority and about 20 agreed to stay overnight in E.B. Magalona while the 30 opted to stay at the airport, Magallanes-Tan said.

“We were never informed about the exact details of returning OFWs. Since there was no available hotel at that time, we offered them to stay for only one night in E.B. Magalona as they will be transferred at a hotel the following morning,” she added.

Some of the OFWs got the wrong notion about the provincial quarantine facility when in fact the place is livable and has a wide area. The place for those who were positive for Covid-19 is far from the area where the arriving OFWs will be placed, Magallanes-Tan added.

They will be brought to a hotel anytime Wednesday, she said.

Local officials are scrambling to look for accommodations for the repatriated Negrenses on the heels of the order of President Rodrigo Duterte to government agencies a one-week deadline for the return of the repatriates, numbering to 24,000.

Governor Eugenio Jose Lacson has expressed exasperation over the lack of coordination of the national government with the provincial government regarding the return of the OFWs.

“I just want to make it clear with IATF (Inter-Agency Task Force), we are not impending the return of these OFWs. We just want to make sure that when they come here, there is enough facility to accommodate them,” he said.

He said, “there is no coordination and everybody was surprised.”

He added that they just have to implement what the president wanted, and “everybody was caught unaware, but we’re doing our best to accommodate these OFWs.”