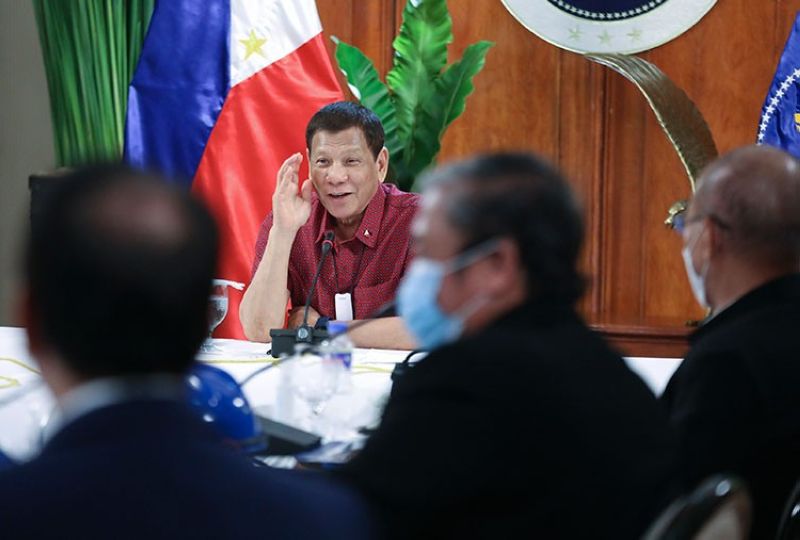 MANILA. In this photo provided by the Malacanang Presidential Photographers Division, President Rodrigo Duterte gestures as he talks to Cabinet officials at the Malacanang presidential palace in Manila, Philippines, Thursday, May 28, 2020. (AP)

President Rodrigo Duterte announced the easing of restrictions in his address to the nation while meeting with some Cabinet members late Thursday.

He also expressed support for the blended and distant learning program of the Department of Education (DepEd), called on schools to allow staggered payment of tuition, and appealed to malls and other building owners to go easy on tenants.

Aside from Metro Manila, other areas that will be under GCQ for the period June 1 to 15 are: Davao City, Cagayan Valley (Region 2), Central Luzon (Region 3), Calabarzon (Region 4-A), and the provinces of Albay and Pangasinan.

Regions, provinces, cities and towns that are not on this list would shift to MGCQ. Guidelines have yet to be released by the Inter-Agency Task Force for the Management of the Emerging Infectious Diseases.

Duterte did not follow the classifications earlier approved by the IATF through its Resolution No. 40 dated May 27, 2020.

Cebu City, which has been tagged as the second epicenter of the coronavirus disease (Covid-19) epidemic in the country next to Metro Manila, and Mandaue City are under enhanced community quarantine (ECQ) until May 31.

DepEd Secretary Leonor Briones, who attended the meeting, assured Duterte that the department shared his “uncompromising stand on the matter of the health and safety of our learners and our teachers”.

Briones read a statement that she sent to the President, shortly after the latter declared that he will not allow classes to reopen until a vaccine against Covid-19 is developed.

Briones earlier announced that school year 2020-2021 will open on August 24, but students and teachers will not be required to physically report to school everyday.

During a Senate committee of the whole hearing on May 21, Briones said they were working on blended learning options that will make use of digital platforms, the television and radio in conducting classes.

Read: No classes until a vaccine is developed, says Duterte

During the meeting with the President on Thursday, she said there has been confusion among the people who associate the opening of classes to the traditional face-to-face classes.

“We are saying that there will be no face-to-face classes until we are assured of the safety of our children and our teachers,” Briones reiterated.

She said the department will make use of blended and distant learning options that will not require students to go to school.

“We now call it blended learning because various approaches which are adjusted to the actual situation of the community will be applied.

“These are all, Mr. President, consistent with your preference that we should not be physically sending our children to school until it’s safe to do so,” she added.

A bill has been filed in Congress seeking to allow a blended learning program.

Under this program, learning materials are printed and delivered to those who don’t have internet connectivity through the barangays.

For those who have access to internet, lessons, homework and other school-related communication may be found online through DepEd commons which has over seven million subscribers.

In cases where there is no connectivity and printed materials may not be available immediately, DepEd will use the television and radio.

Duterte said he was impressed by and believed in the feasibility of the DepEd program to ensure learning continuity in the time of the Covid-19 pandemic.

“I believe we have a very workable program and I support you. And should you require any help from any of the departments, feel free to communicate with them,” the President told Briones.

If it’s a question of funding, Duterte said he will “scrape the bottom of the barrel” to ensure that the youth will continue to earn an education. (MVI with JTM/SunStar Philippines)