Labella to IATF: Put Cebu City under GCQ, instead of MECQ 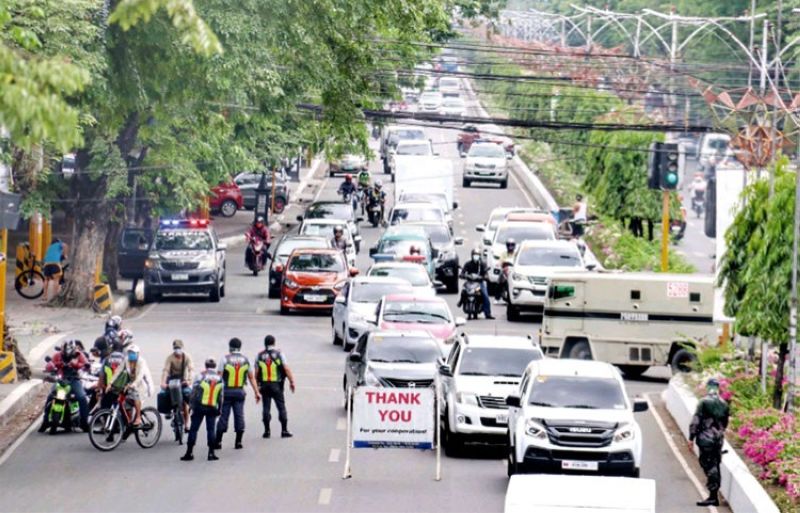 CEBU. Cebu City is the only area in Cebu and Central Visayas that on June 1-15 will be placed under modified enhanced community quarantine (MECQ), wherein few of the restrictions under ECQ are changed. Checkpoints such as this one on Osmeña Boulevard on Thursday, May 28, 2020, will remain in effect. Everywhere else in Region 7 will now be on general community quarantine (GCQ), wherein businesses and other social activities can resume. (Amper Campana)

The rest of Central Visayas, including the cities of Mandaue and Lapu-Lapu in Cebu Province and the provinces of Bohol, Cebu, Negros Oriental and Siquijor, will be on general community quarantine (GCQ) during the same period.

The four paged-resolution issued by the Inter-agency Task Force (IATF) for the Management of Emerging Infectious Diseases on Wednesday, May 27, classified Cebu City as a high-risk highly urbanized city (HUC) amid the coronavirus disease 2019 (Covid-19) pandemic.

"(This is) without prejudice to the declaration of localized enhanced community quarantine in critical areas," read a portion of IATF Resolution 40.

The IATF said provinces, HUCs and independent component cities referred to as low, moderate and high-risk may appeal their classification to the IATF screening and validation committee with the concurrence of the regional IATF not later than noon of May 29.

In his letter dated May 28 to Department of the Interior and Local Government-Central Visayas (DILG 7) Director Leocadio Trovela, regional IATF chairman, Labella said “it is but a logical step” for the City to transition into GCQ, citing the increasing number of recorded laboratory-negative, continuous decline of recorded cases daily and the low mortality rate of Covid-19.

Labella, though, said that segmental and sequential lockdowns will be implemented in critical areas.

Cebu City is the only local government unit in the country that is still under ECQ status, albeit with modifications.

“Our strategic community testing has already been completed and we are confident that the City of Cebu is ready to transition into general community quarantine,” wrote Labella.

The mayor said he is aware of the risks once the entire city shifts to GCQ, but it is only through this that the public can return to work.

However, if Labella’s appeal is denied and Cebu City will start to be on MECQ on June 1, City Hall spokesman Rey Gealon said the City is prepared for the transition.

He pointed out that Labella had signed Executive Order 77 on May 15, which placed the city on MECQ, but it was revoked the next day.

“Cebu City is prepared for the transition. The only difference now is testing of employees (for Covid-19) is no longer mandatory,” Gealon said.

He said employers will be required to list down all their employees’ names and addresses.

The Business Permits and Licensing Office will inspect offices to ensure health protocol is in place like chairs and tables are placed in intervals and plastic covers are installed to prevent virus transmission, among others.

Gealon said business establishments have one week to comply with requirements.

He said industries that fall under category 4, such as spas and massage parlors, barbershops, gyms and other services where social distancing is impossible to impose, still cannot operate.

Public transportation also cannot operate on MECQ, but the Land Transportation Franchising and Regulatory Board has authorized 200 buses to ply the city’s roads, he said.

Gealon said they will release the 16 routes soon.

This is to ensure that social distancing can still be observed inside buses, he said.

Limited outdoor exercises, such as walking and jogging, will be allowed, provided health protocol is followed.

Gealon reminded the public that masks must be worn and social distancing must be observed at all times, adding that the stay-at-home order is still in effect.

In Mandaue City, the City Government announced that it will deploy 120 non-airconditioned buses within the city and to neighboring cities and towns when the city transitions into GCQ on June 1.

Mayor Jonas Cortes said they are preparing for the “new normal,” particularly on the matter of mass transit.

He said buses from the Ceres Bus Liner will ply 12 routes, ferrying passengers to the northern town of Liloan, Lapu-Lapu City across the Mactan Channel, the border of Cebu City and a carousel route within the city.

He said minimum fare will be P11 for the first five kilometers.

Aside from collecting fares, bus conductors will also make sure that social distancing is observed inside the buses and passengers have quarantine passes or identification cards stating they are essential workers.

The mayor said bus stops will be installed every 500 meters along each route.

So far, he said, they’ve only put up signs and railings but soon they will also build waiting sheds at the bus stops.

Cortes said the buses will only pick up and drop off passengers at designated bus stops.

He said traffic enforcers underwent a three-day seminar regarding the routes in preparation for the GCQ.

During GCQ, the number coding protocol of vehicles is still in place, while vehicles of essential workers remain exempted.

Cortes said the public should not be complacent just because the city will be on GCQ.

He said masks must be worn and social distancing must be observed at all times, adding that people should make a habit of washing their hands frequently.

He said people who go outdoors must carry quarantine passes.

The mayor said he was grateful that the city’s ECQ status was not extended.

Cortes said Mandaue City may have more than 200 Covid-19 cases, but the bulk of these are inside the city jail.

Felix Taguiam, president of the Cebu Chamber of Commerce and Industry, said he is happy that Mayor Labella has appealed to the regional IATF to downgrade Cebu City’s status to GCQ.

"Businesses are raring to start already. We may need the guidelines from City Hall on what is needed to open," he said.

But even if the city will be on MECQ from June 1 to June 15, more businesses can reopen despite some restrictions, he said.

"That would mean that our employees can start reporting to work, which is an utmost priority," he said.

In areas under MECQ status, limited operations will be allowed in malls, commercial centers and leisure establishments.

Other establishments that can resume operation:

dining/restaurants (deliver and take-out only);

IT, communications and electronic equipment; and

Mandaue Chamber of Commerce and Industry president Steven Yu, for his part, said the IATF decision is "part of the gradual and safe reopening of the economy based on scientific and calibrated data."

"However, we should take note that we are still under community quarantine which means that public health standards apply and we should stay at home except only when we go out to buy essential items or work in exempted establishments," he said.

He warned that the threat of Covid-19 is still real and urged the public to exercise extreme caution when outdoors or at work.

"The deployment of public transportation which will pose a threat to social distancing should be avoided. Until a vaccine is found, lives are still at risk and losing one’s life is one too many," he said.

Other areas in the country placed under GCQ status included Iloilo City for Visayas; Zamboanga City and Davao City for Mindanao; Baguio City, Pangasinan, Batanes, Albay and Cagayan among others in Luzon.

An IATF resolution dated May 22 allows religious gatherings in areas under modified GCQ under guidelines declared through the subsequent issuance of the IATF.

It also allows limited operations in malls and shopping centers in areas on MECQ and GCQ, except for leisure establishments and services, which will continue to be closed. (WBS, JJL, KFD, JOB)