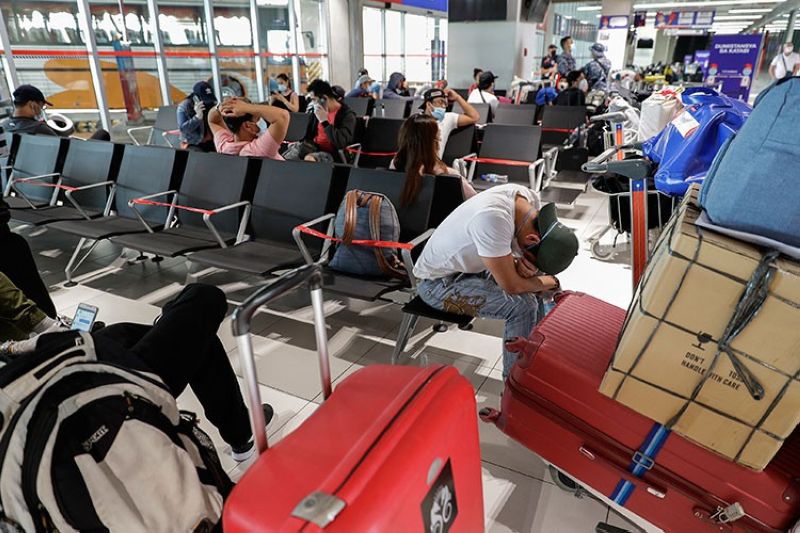 MANILA. An overseas Filipino worker, who got quarantined as they arrived in the country weeks ago, rests beside his bags while they wait for their free ride back to their provinces on Tuesday, May 26, 2020 in Manila, Philippines. As about 24,000 Filipinos who lost their jobs abroad are being transported by land, sea or air to their provincial homes, the President warned local officials not to refuse them entry out of coronavirus fears. (AP)

Año said the “Balik Probinsiya” program is a long-term program that will be implemented after this crisis sparked by the coronavirus disease (Covid-19).

Under this program, the government entices residents of Metro Manila to return to their hometowns by providing them with incentives.

What is being implemented now is the “Hatid Probinsiya” program, which facilitates the return of stranded students, workers and returning overseas Filipino workers (OFWs) to their hometowns.

"It's not really a part of Balik Probinsiya because Balik Probinsiya is a program of the government where we intend to bring home families or even workers whose families are in the provinces and they would settle permanently and they will be provided assistance through livelihood. What we are actually doing now is bringing home stranded individuals,” he added.

Earlier, Ormoc City Mayor Richard Gomez in Leyte slammed the government’s “carelessness” in the implementation of the Balik Probinsiya program.

"DILG, NHA, OWWA, what happened to all the protocols that you guys are trying to formulate for returning residents,” he said in a Facebook post.

Gomez made the statement after the arrival of repatriated OFWs in Leyte without prior notice to the concerned local government units.

He said he was put on the spot after he received a text message from the DILG region 8 about the arrival of the OFWs at the Tacloban City airport and that they were instructed to receive them even without proper documentation and testing.

Minutes later, he said he received a memorandum from the DILG asking him to relax Ormoc’s quarantine protocols and receive the returning OFWs even without proper documentation.

Prior to their return in their respective localities, OFWs should undergo quarantine and testing for novel coronavirus, or Sars-CoV-2, upon their arrival in Metro Manila.

However, Gomez said they were instructed to facilitate the isolation and testing of the returning OFWs.

"In short, the agencies will just throw the OFWs our way, and it'd be up to us to process them regardless of whether we have quarantine housing or not," Gomez said in Filipino.

"It only takes one infected person to get to our city to infect a hundred innocent people because of carelessness from the national government agencies," he added. (SunStar Philippines)