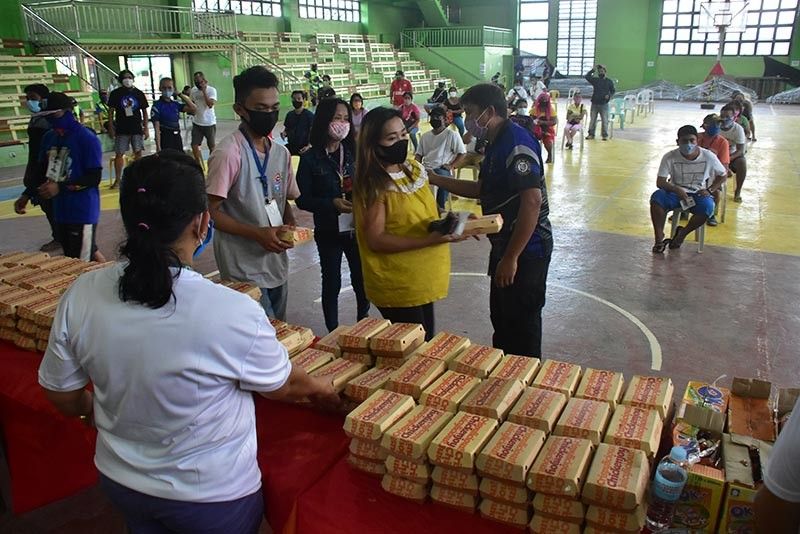 DAVAO. Residents of Barangay Mintal in Tugbok District, Davao City received their Chicken Joy Friday, May 29, 2020, after winning the cluster wars of Davao City Mayor Sara Duterte-Carpio. Cluster 5, which Tugbok is a part of, together with Cluster 4, has the lowest number of Covid-19 cases in Davao City. (Macky Lim)

RESIDENTS in five districts of Davao City feasted on 10,000 pieces of fried chicken as their prize for having the lowest coronavirus disease (Covid-19) cases since the lockdown was implemented in March.

Davao City Mayor Sara Duterte-Carpio announced on Thursday, May 28, 2020, that Clusters 4, consisting of Toril District, and 5, consisting of Calinan, Baguio, Marilog, Tugbok districts and some barangays of Paquibato, were the winners of the month-long "cluster wars."

On Friday, May 29, each winning district received 2,000 pieces of Jollibee Chickenjoy with rice and drinks as prizes.

The prizes were distributed by the barangay officials.

For Baguio District it was distributed at Malagos Elementary School, while in Calinan District the distribution was held at Calinan Gym; in Tugbok District at Mintal Gym; Toril District at Toril Gym; and Marilog District at Marilog Proper Gym.

Duterte-Carpio said in a radio interview via 87.5 FM Davao City Disaster Radio on May 28 that she wishes that the winning districts will no longer see an increase of Covid-19 cases in their areas.

Meanwhile, the mayor, who is a resident covered under Cluster 1, said in jest they have accepted their fate of losing in the cluster wars since the Cluster 1 has the highest number of Covid-19 cases in the city.

"Kami sa Cluster 1, gidawat na namo among fate, ang among kapalaran nga kami na gyud (ang pildi) (We at the Cluster 1 have accepted our fate. We were destined not to win)," she said, adding that the Cluster 1, composed of Poblacion and Talomo District, is an urbanized area with a high population.

The mayor announced the challenge on April 22 in response to the Davao City Clustering System, which divided the city into six clusters in a bid to slow the spread of Covid-19 cases in the city. The clustering system, however, was lifted on May 16 since the city was already placed under general community quarantine (GCQ).

The mayor's distribution of the Chickenjoy came days before her birthday.