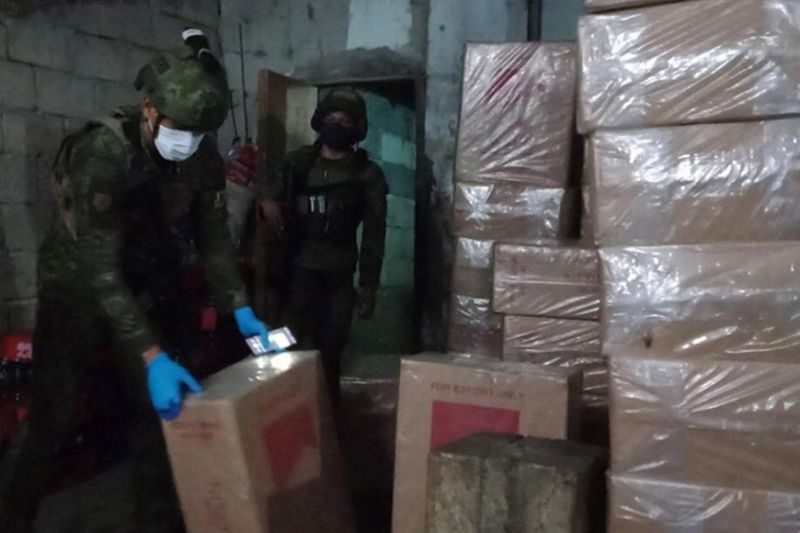 ZAMBOANGA. Joint team of soldiers and policemen seize in a raid some P10.1 million worth of smuggled cigarettes on Tuesday, May 26, at a warehouse in Camp Islam village, this city. A photo handout shows lawmen inspecting the master cases of the confiscated cigarettes. (SunStar Zamboanga)

LAWMEN have seized some P10.1 million worth of smuggled cigarettes in a raid of a warehouse in Zamboanga City.

Divinagracia said the joint team of the 74th Infantry Battalion and police forces have recovered 300 master cases of assorted smuggled cigarettes with an estimated value of P10.1 million.

He said the contraband items were turned over to the Police Station 8 of the Zamboanga City Police Office (ZCPO) documentation and for proper turnover to the Bureau of Customs (BOC).

Lieutenant Cirilito Sobejana, commander of the Western Mindanao Command (Westmincom), has commended the troops and the police for the accomplishment in the fight against smuggling.

“May this success serve as a warning to all those who continue to perpetrate illegal activities such as smuggling,” Sobejana said.

Divinagracia said that investigation is underway to determine the ownership of the smuggled cigarettes. (SunStar Zamboanga)