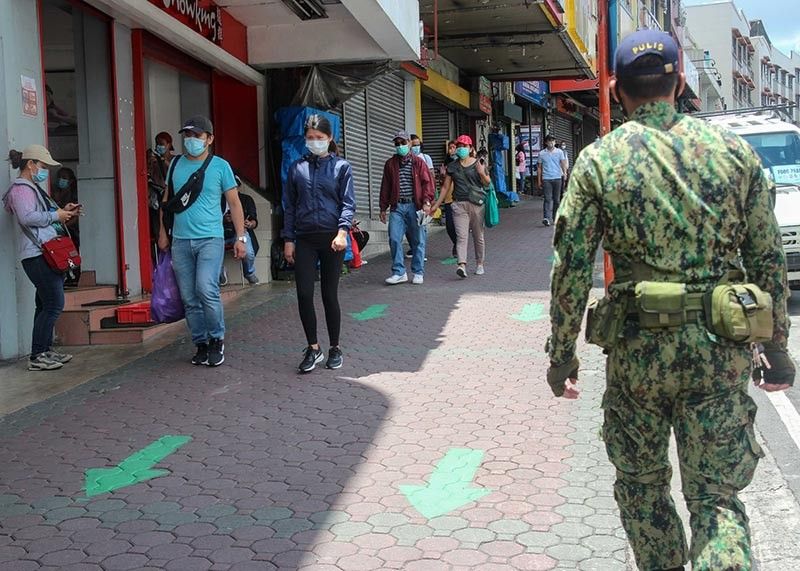 BAGUIO. Arrows guide pedestrians on the one-way scheme being implemented at Session Road since the transition of Baguio City to general community quarantine (GCQ). (Photo by Jean Nicole Cortes)

The mayor said as of May 28, the city has a total of 32 coronavirus disease (Covid-19) cases, 29 of whom recovered and two active presently confined one of whom a Philippine National Police member who tested positive a few days after arriving in the city while its lone fatality had an underlying condition.

City Health Officer Rowena Galpo said the city’s current reproduction number of .8 is less than one meaning there is a low chance to transmitting the disease in the city.

Apart from the encouraging data on Covid-19 incidence, the mayor cited current accomplishments in support systems like the recent strengthening of the city’s testing capacity with the addition of six PCR machines and two automated RNA extraction machines at the Baguio General Hospital and Medical Center (BGHMC) and the institutionalized contact tracing system which has been effective in identifying contacts and areas of concentration of the disease.

There are also the health and safety mechanisms put in place for the various sectors as they start reopening and the well-placed systems on returning overseas and local residents and workers with enough health and safety mechanisms and protocols like online registration, triage system and quarantine and isolation centers to ensure disease control.

“With these safety mechanisms in place, we have an added assurance of swift implementation of disease management procedures as we begin to ease up restrictions in the business sector,” the mayor said.

Another factor is the innate discipline of the Baguio residents evident since the ECQ.

“I say it with immense pride that the stability and progress of our city is realized through the shared responsibility and cooperation of the city government, our uniformed personnel and our citizens,” he said. (PR)