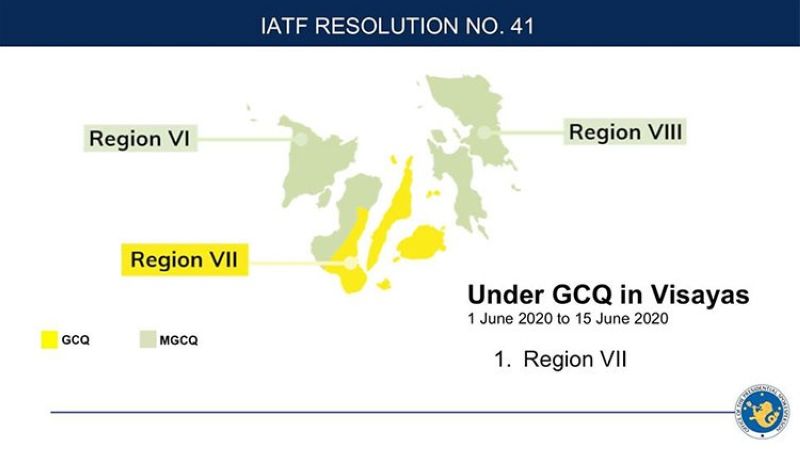 Image from Office of the Presidential Spokesperson

TIMELINE. [] Wednesday, May 27: IATF resolution placing Cebu City under MECQ and the rest of Cebu under GCQ announced. [] Thursday, May 28: Cebu City's Mayor Labella petitioned regional IATF for shift to GCQ. Thursday night: President Duterte announced MGCQ for Cebu City and rest of Cebu. [] Friday, May 29: Carlito Galvez, chief implementer of national policy against Covid-19, after briefing in Cebu City, lobbied at IATF meeting that night. [] Saturday, May 30, 1 a.m. OPAV announced "Cebu City will be GCQ like the rest of the Visayas." Saturday morning, Presidential Spokesperson Harry Roque announced the IATF has approved Resolution No. 41, which includes Central Visayas in the list of GCQ areas.

TWIST AND TURN. Wednesday, May 27, news broke out that the IATF-MEID (or Inter-Agency Task Force on Management of Emerging Infectious Diseases) decided to place, starting June 1, every local government under GCQ or general community quarantine. Except Cebu City, which the resolution called a "high risk" city and would be under MECQ, the modified version of enhanced quarantine. (One news headline read, "IATF resolution makes Cebu City lone MECQ area until June 15"). IATF Resolution #40 of May 27 said other "high-to-moderate-risk" in the National Capital Region would shift to GCQ. Mandaue City and Lapu-Lapu City were in the list, along with Bohol, Negros Oriental, and Siquijor.

Saturday dawn, OPAV announced the outcome. It's GCQ unless the President will have a different view again.

Saturday morning, Roque confirmed OPAV's announcement, saying the entire Central Visayas, including Cebu City and Mandaue City, have been added to the list of GCQ areas.

Why the mix-up in messages, which confused many people, including local government leaders whose job is to prepare for the enforcement of quarantine guidelines?

The IATF resolution was probably leaked ahead of Duterte's review and approval. Or it was approved by the President but he changed his mind and announced a different version on national TV.

News of the resolution circulated Wednesday and most of Thursday before the President announced the altered version Thursday night.

Since the Duterte reversal, stories from Manila have placed Cebu City, starting June 1 at MECQ and the rest of Cebu at GCQ. As of early morning Saturday, May 30, the IATF decision on appeal was still not "storified." A Twitter feed from one local newspaper broke the news in one paragraph, saying it got the tip Saturday dawn. Cebu City's public information office (P.I.O.) last update, as of Saturday, was still about the mayor waiting for IATF action on his appeal. Capitol's P.I.O. reported Gov. Gwen Garcia's schedule to talk with the mayors about MGCQ. Roque's confirmation of Cebu City's quarantine status was reported around 11 a.m. Saturday.

What's for Cebu by June 1

Disregard the May 27 IATF resolution which confused a lot of people, including some sectors of the regular media. Disregard Duterte's announcement of Thursday night.

Starting Monday until June 15 : Cebu City -- along with Mandaue City, Lapu-Lapu City and Talisay City and Cebu Province and the rest of Central Visayas -- will be general quarantine.

But prepare to be confused again if IATF or Malacañang will have something different between now and next Monday.

The change in category is called downgrading, which ordinarily means a demotion. Here it is not. The threat and the restriction are diminished; thus it's an improvement.

Each stage moves closer to the goal: containment of the coronavirus or end of the lockdown. Moving forward from one stage to the other eases some restrictions. But it could move the other way, which some health experts fear: a next wave that would set back the LGU to a category it had gone through.

It is "moving on" or, if one's doesn't like the romance-breakup cliché, "moving forward."

Implementation of GCQ is being promoted as the phase that "will allow more sectors to reopen as the government strives to revive the economy amid the epidemic."