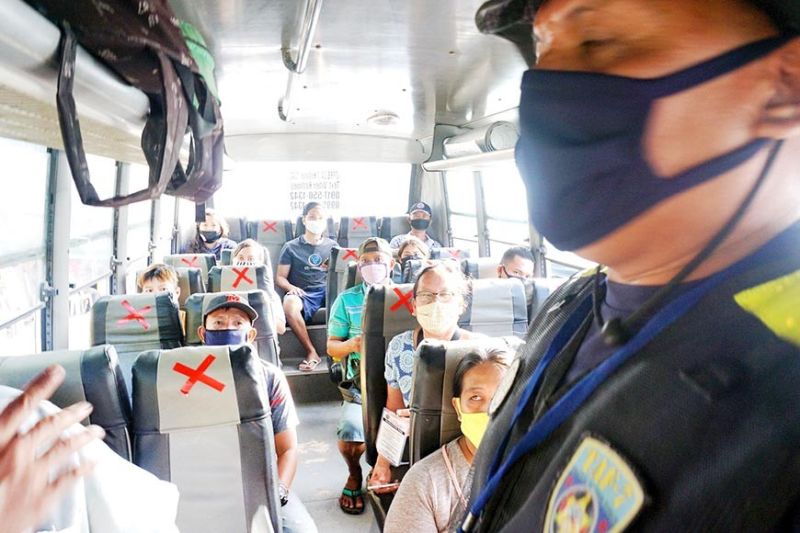 RIDING TOGETHER, BUT APART. Elements of the Liloan Traffic Command and the police board a bus at a checkpoint at the boundary of the towns of Consolacion and Liloan on Friday, May 29, 2020 to check if physical distancing has been implemented to prevent the spread of Covid-19. On Thursday, President Rodrigo Duterte said Cebu City, which is currently under enhanced community quarantine, would be placed under modified general community quarantine by June 1. (SunStar photo / Allan Cuizon)

BEGINNING June 1, 2020, the whole Island of Cebu, including its major cities, Cebu, Mandaue and Lapu-Lapu will shift to modified general community quarantine (MGCQ) as declared by President Rodrigo Duterte.

In his address to the nation following a meeting with some Cabinet members late evening of Thursday, May 28, Duterte announced the easing of restrictions in many parts of the country.

The President said only the National Capital Region (Metro Manila), Davao City, Cagayan Valley (Region 2), Central Luzon (Region 3), Calabarzon (Region 4-A), and the provinces of Albay and Pangasinan will remain under GCQ while the rest of the country will transition to MGCQ from June 1 to 15.

The announcement effectively places Cebu City, tagged as the second epicenter of the coronavirus disease (Covid-19) epidemic in the country next to Metro Manila, under the more relaxed state of MGCQ.

“We have to follow. We will just act accordingly,” said Cebu City Mayor Edgardo Labella who has declared, early on, that he prefers the City to be under general community quarantine (GCQ) after May 31.

With the MGCQ, Labella said restrictions will be more relaxed than those under the GCQ.

On May 27, the Inter-Agency Task Force for the Management of Emerging Infectious Diseases (IATF-EID) issued a resolution placing Cebu City under modified enhanced community quarantine (MECQ) after May 31.

On May 28, Labella appealed the IATF resolution and asked that Cebu City be placed under GCQ instead of MECQ.

Labella said he will abide by whatever final decision the National Government will have on the matter.

To guard against the transmission of the coronavirus, health protocols like social distancing, the wearing of masks, and prohibiting mass gatherings will still be strictly implemented during the MGCQ, Labella said.

Like Labella, Mandaue City’s chief executive would rather have his city downgraded to GCQ first before transitioning to MGCQ.

"It will affect more lives and it will be dangerous to immediately lift the status,” Mandaue City Mayor Jonas Cortes said in a mix of Cebuano and English referring to a second wave of infections feared by experts if measures are not properly undertaken.

"We have to weigh things up. We have to balance health and wealth," Cortes added.

Cortes has adopted Resolution No. 40 of the IATF-EID recommending Mandaue City to be placed under GCQ effective on June 1.

After the President’s MGCQ announcement on Thursday, Cortes said in an interview that they will continue to wait for the final recommendation of the IATF-EID.

Mandaue City has already prepared its guidelines for the implementation of a GCQ such as the deployment of 120 buses to augment the people’s transportation needs.

Cortes also convened the City’s 27 barangay captains in preparation for a GCQ on June 1 as initially recommended by IATF.

Meanwhile, if Lapu-Lapu City Mayor Junard "Ahong" Chan had a say on the matter, he too would rather have his city stay under GCQ rather than downgraded to MGCQ.

“I have reservations about the MGCQ because the virus is still very much around,” Chan told SunStar Cebu in Cebuano.

Chan said among his reservations is the MGCQ provision that would allow senior citizens to go out of their homes.

Chan fears for the safety of the elderly outside their homes as the Covid-19 continues to spread.

Meanwhile, Felix Taguiam, president of the Cebu Chamber of Commerce and Industry, said they are waiting for final guidelines from the Cebu City Government so they can have one stand.

For his part, Steven Yu, president of the Mandaue Chamber of Commerce and Industry, said in line with the objective of gradually and safely reopening the economy, GCQ might be the better next community quarantine level for Mandaue.

"With GCQ, most of the businesses will be re-opened. In terms of economic resuscitation, GCQ is the ideal next step," he said.

Yu pointed out that businesses are also not ready to immediately jump into the MGCQ since their workers still have to return from their hometowns while workplaces still have to adopt new health standards.

"The virus is still in the air, as the President said. Premature extra loosening might give the wrong expectations, and might lead to an increase in cases," warned Yu.

The sentiment is shared by micro, small and medium enterprises (MSMEs), according to Rey Calooy, president of the Filipino-Cebuano Business Club.

"At least we can jumpstart and restart the business and start recovering the economy which is the most hard-hit. But we have a problem on the side of market demand because the stigma of the Covid-19 pandemic is still there and people are afraid of going around," Calooy said.

Calooy said most businesses would not re-open, full swing, as business owners take time to observe consumer behavior especially that people have lost their jobs.

Duterte, in his meeting with members of the Cabinet expressed support for the blended and distant learning program of the Department of Education (DepEd).

He called on schools to allow the staggered payment of tuition, and appealed to malls and other building owners to go easy on tenants.

DepEd Secretary Leonor Briones, who attended the meeting, assured Duterte that the department shared his “uncompromising stand on the matter of the health and safety of our learners and our teachers.”

Briones read a statement that she sent to the President, shortly after the latter declared that he will not allow classes to reopen until a vaccine against Covid-19 is developed.

Briones earlier announced that school year 2020-2021 will open on Aug. 24, but students and teachers will not be required to physically report to school everyday.

During a Senate committee of the whole hearing on May 21, Briones said they were working on blended learning options that will make use of digital platforms, the television and radio in conducting classes.

During the meeting with the President on Thursday, she said there has been confusion among the people who associate the opening of classes to the traditional face-to-face classes.

“We are saying that there will be no face-to-face classes until we are assured of the safety of our children and our teachers,” Briones reiterated.

She said the department will make use of blended and distant learning options that will not require students to go to school.

“We now call it blended learning because various approaches which are adjusted to the actual situation of the community will be applied.

“These are all, Mr. President, consistent with your preference that we should not be physically sending our children to school until it’s safe to do so,” she added.

A bill has been filed in Congress seeking to allow a blended learning program.

Under this program, learning materials are printed and delivered to those who don’t have internet connectivity through the barangays.

For those who have access to internet, lessons, homework and other school-related communication may be found online through DepEd commons which has over seven million subscribers.

In cases where there is no connectivity and printed materials may not be available immediately, DepEd will use the television and radio.

Duterte said he was impressed by and believed in the feasibility of the DepEd program to ensure learning continuity in the time of the Covid-19 pandemic.

“I believe we have a very workable program and I support you. And should you require any help from any of the departments, feel free to communicate with them,” the President told Briones.

If it’s a question of funding, Duterte said he will “scrape the bottom of the barrel” to ensure that the youth will continue to earn an education. (JJL, KFD, FVQ, JOB, MVI with JTM / SunStar Philippines)