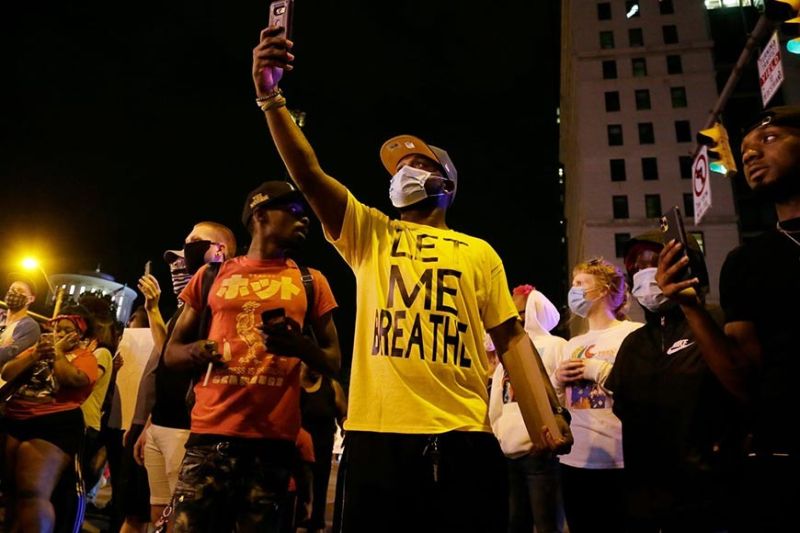 OHIO. Protesters stand in downtown Columbus, Ohio, Thursday, May 28, 2020, during a demonstration over the death of George Floyd in police custody Monday in Minneapolis. Columbus police used pepper spray to disperse protesters after some threw plastic bottles of water, smoke bombs and other items at police. Windows at the Statehouse and in bus stations along High Street were shattered, trash cans were tossed and decorative planters wrecked. (AP) 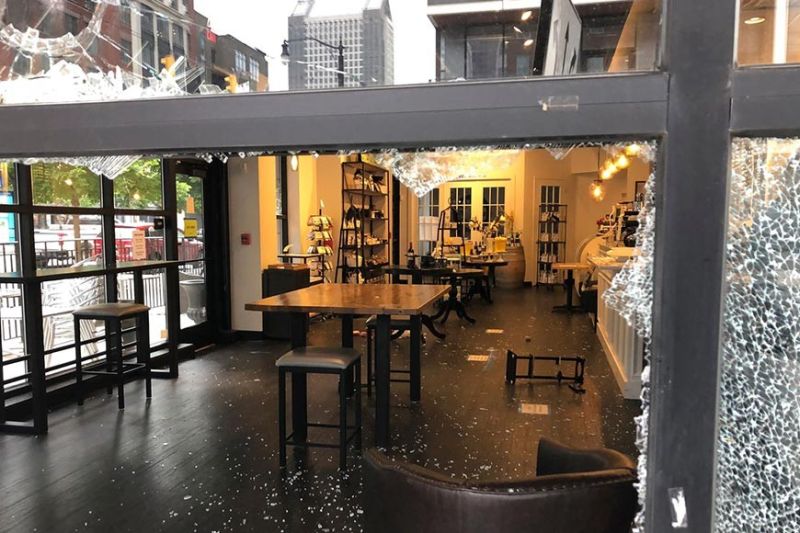 OHIO. Damage inside Winan’s Chocolates Coffees Wine near downtown on Friday, May 29, 2020, in Columbus, Ohio. Franchise owners Monica and Miles Thomas said much of the store’s supplies of wine and chocolate were stolen or smashed. The damage happened early Friday as protesters angry over the death of George Floyd in Minneapolis police custody turned out for a demonstration in Columbus that began peacefully but turned violent, with windows smashed at the Ohio Statehouse and storefronts along surrounding downtown streets. (AP)

COLUMBUS, Ohio -- Protesters angry over the death of George Floyd in Minneapolis police custody turned out for a demonstration in Columbus that began peacefully but turned violent early Friday, May 29, with windows smashed at the Ohio Statehouse and storefronts along surrounding downtown streets.

The crowd of around 400 people entered into a standoff with Columbus police Thursday night, blocking the intersection of key streets in the Ohio capital for hours, the Columbus Dispatch reported.

The demonstration began as a peaceful protest, but news outlets reported protesters began throwing objects like water bottles at officers, who responded by using tear gas on the crowd. A scuffle between a protester and an officer broke out around 9:45 p.m., WCMH-TV reported.

Videos obtained by The Associated Press show people smashing the building’s windows. One person briefly entered an office through a broken window but retreated before troopers within the building could catch him, said Ohio State Highway Patrol spokesman Lt. Craig Cvetan.

Broken Statehouse windows were boarded up early Friday and workers were placing plywood over undamaged first floor windows out of precaution.

Protesters smashed windows at Winan’s Chocolates + Coffees + Wine a couple blocks south of the Statehouse. Franchise owners Monica and Miles Thomas estimated half the store’s chocolates were taken and three-quarters of its wine smashed or stolen.

Monica Thomas called the damage frustrating and disconnected with the reason people were protesting.

“Stealing wine has nothing to do with what’s going on,” she said.

Friday morning, Mayor Andrew Ginther said looting and property destruction won’t be tolerated and that protests should remain peaceful. But people have to acknowledge that racism exists and address it, he said.

“I’m as frustrated as folks in the streets are,” Ginther said. “We are sick and tired of the racism that we’ve seen play out across the country.”

Earlier Thursday, video showed the crowd marching down Broad Street and blocking High Street, two downtown arteries near the statehouse. As they marched, protesters engaged in a call-and-response chant: “Say his name," followed by “George Floyd.”

Protesters broke windows for several blocks along South High Street and East Broad Street—the main arteries through downtown—including at the county courthouse and municipal court building. A DGX store, a subsidiary of Dollar General, was broken into, along with windows at offices, other restaurants and a gym. Protesters smashed a storefront at the Einstein Bros. Bagels shop across the street from the statehouse.

“The people that hate bad cops more than anybody else are good cops,” the sheriff said.

Floyd, a black man, was handcuffed and pleading for air as a white police officer kneeled on his neck Monday. His death has touched off protests across the country this week, including in Minneapolis itself, where protesters torched a police precinct Thursday night. (AP)