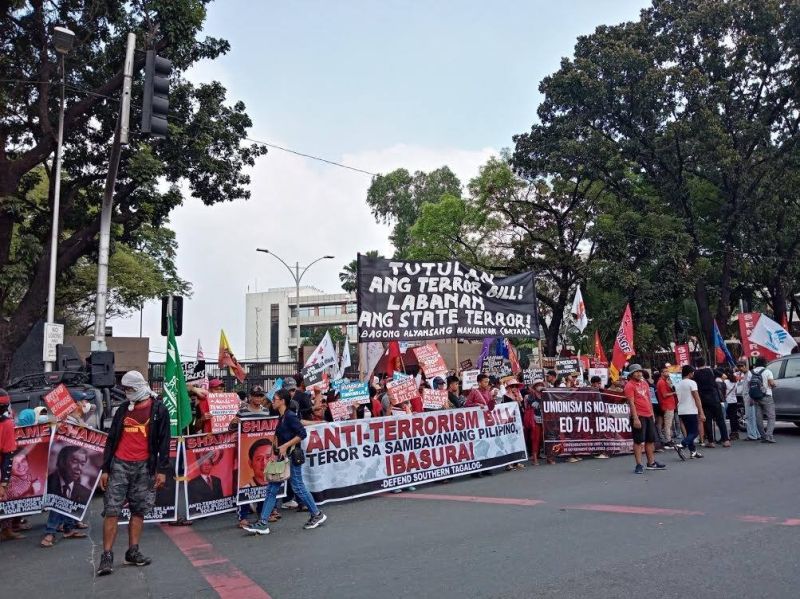 MANILA. In this photo taken before Metro Manila was placed under quarantine, protesters gather at the House of Representatives to appeal against a bill similar to Senate Bill 1083, or the proposed Anti-Terrorism Act of 2020. (Photo by Jove T. Moya)

A BILL seeking to strengthen the anti-terrorism policies in the country was approved by two House of Representatives committees Friday, May 29, despite criticisms from human rights groups and lawyers.

If enacted into law, the measure would repeal the Human Security Act of 2007.

It is similar to Senate Bill 1038, which was passed on third and final reading in February 2020.

The Senate version allows the police or military to perform warrantless arrests against suspected terrorists and detain them for two weeks, with allowable 10-day suspension.

Twelve years of imprisonment may also be imposed on any person who shall voluntarily join any terrorist organization or group.

The bill also removed the provision on payment of P500,000 damages per day of detention of any suspected person.

“The instruction of the House leadership is to somehow submit and approve today a bill that is similar to the Senate bill,” Masbate 1st District Representative Narciso Bravo Jr. said.

The new bill defines a terrorist as someone who:

- Engages in acts intended to cause death or serious bodily injury to any person, or endangers a person’s life;

- Engages in acts intended to cause extensive damage or destruction to a government or public facility, public place or private property;

- Engages in acts intended to cause extensive interference with, damage or destruction to critical infrastructure;

Human rights group Karapatan said the bill has “vague definitions of the crime of terrorism as well as draconian provisions, will certainly violate the people’s constitutional rights and civil liberties.”

For the National Union of People’s Lawyers (NUPL), the bill will only be used as a”weapon for stifle dissent.”

In a statement, the group said the measure would only serve as a legal framework for a crack down on progressive organizations.

“The bill would broaden the powers already granted to law-enforcement agencies under the Human Security Act, enabling them to conduct lengthier surveillance operations, wiretap and record private communications, access databases, examine bank records, and freeze the assets of persons and organizations suspected of financing terrorism or having connections with alleged terrorists,” the group said.

It added that the bill would also allow the military to carry out surveillance activities previously reserved only for police officials.

“Those arrested and detained without warrants would not even have the benefit of being presented before a judge, as the bill removed, with no justification, this safeguard written into R.A. 9372,” the group said.

The Alliance of Concerned Teachers (ACT) also questioned the need to strengthen the anti-terrorism laws of the country.

"This is yet another attack on our rights and liberties. Not only are we denied livable wages and dignity with the President's treacherous passing of an insultingly meager pay hike, now we are at risk of being called terrorists for demanding more and what is due us," said ACT secretary general Raymond Basilio. (SunStar Philippines)