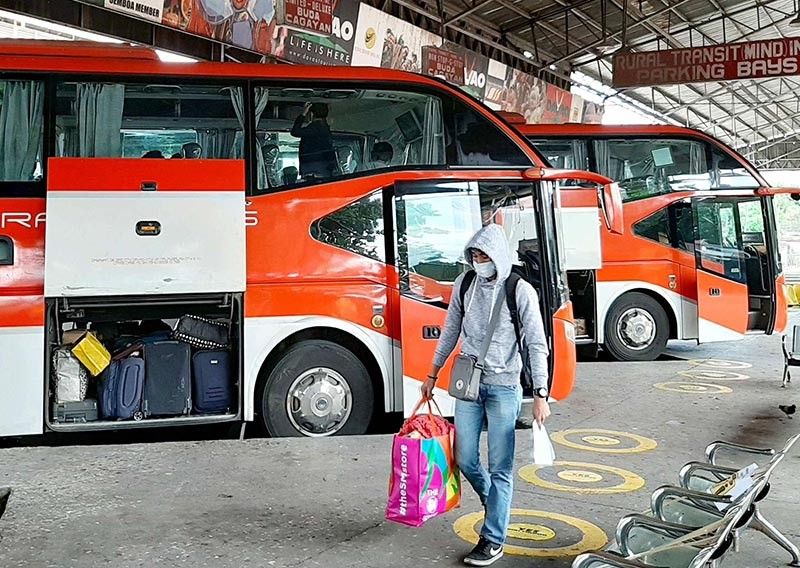 THE Land Transportation Franchising and Regulatory Board-Davao Region (LTFRB-Davao) on Saturday, May 30, bared the schedule and destination of the one-trip per day bus route that will resume on Monday, June 1.

LTFRB-Davao posted on its official Facebook page that the approved bus routes will be between Davao City and destinations in the provinces of Davao del Norte, Davao Oriental, Davao de Oro, and Davao del Sur.

Here are the following routes, drop-off points and departure time.

LTFRB-Davao director Armand Dioso told Sunstar Davao in a phone interview that the special bus trips took effect on May 30 and will be implemented in the duration of the general community quarantine (GCQ).

The resumption of bus trips from Davao City was announced by Davao City Mayor Sara Duterte-Carpio in a radio interview on Friday afternoon, May 29.

Duterte-Carpio said only one trip each day was approved per route and the point of origin will be at the Davao City Overland Transport Terminal (DCOTT).

Dioso said the limitation of the bus trips was due to the local government unit’s (LGU’s) inadequate personnel who will conduct the health screening.

“Ilahang (LGUs) gi-suggest (during the meeting) is that once a day lang usa ang bus trips aron mahatagan nila og atensyon ang mga pasahero (The LGUs suggested during a meeting that we will have it one bus trip per day for now so that they could thoroughly screen passengers),” he said.

Notably, only one bus trip heading southern part of the region was approved.

Dioso said other LGUs have not yet responded to their coordination. He admitted the office was struggling to communicate with other LGUs for them to allow entry of the provincial buses in their locality.

However, he said they are still trying to reach out to add up more bus routes.

Dcott head Aisa Usop, meanwhile, said in a separate phone interview that they have already finalized health standard measures in preparation for the resumption of the bus trips.

Usop said passengers would undergo strict health screening upon entry in the terminal.

She said only one bus per company per trip/route is allowed. Only buses with a special permit from LTFRB can operate.

A terminal to terminal policy will be observed. Bus drivers are also not allowed to pick up passengers along the way.

To properly implement the physical distancing rule, Usop said buses are only allowed to carry 50 percent of the total capacity of the vehicle.

She also said the terminal will strictly implement a “no face mask, no entry” policy.

She also said buses shall install sanitizer or spray alcohol to passengers upon entry. Footbaths at the entrance of the buses shall be placed too.

“Also, among limitahan ang pagsulod sa mga buses sulod sa terminal. Maong we will be coordinating with the checkpoints nato sa city, wherein among iregulate ang traffic sa buses (Also we will limit the entry of buses inside the terminal. That is why we are coordinating with our city border checkpoints to regulate the traffic of the provincial buses entering the city),” Usop said.

Passengers who will not be catered in the said bus trip since it is a “first come, first serve” basis will be prioritized in the next trip, she said.

She also said the terminal is also adjusting its operations since it is also the drop off point of the government-initiated sweeper bus trips for stranded passengers outside the region.