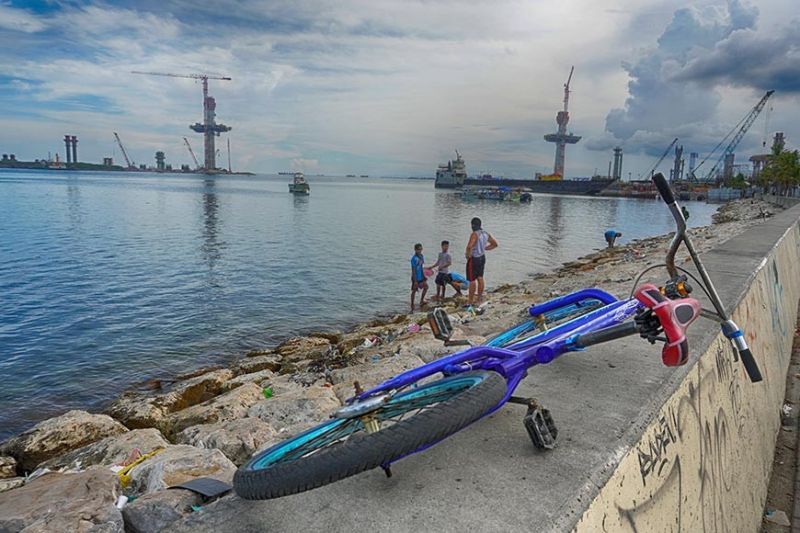 SLOWLY GOING BACK TO NORMAL. More and more people in Cebu City are venturing outside like these folks who are catching fish off the South Road Properties, even though the city is still on enhanced community quarantine (ECQ) to prevent the spread of the coronavirus disease 2019. The ECQ status will finally be lifted on June 1 after two months when the city transitions to general community quarantine despite the city having one of the highest Covid-19 cases in the country. (Photo by Alex Badayos)

CEBU City will be placed under general community quarantine (GCQ) status from Monday, June 1, 2020 to June 15. However, segmental and sequential lockdowns will be implemented in critical areas.

The Inter-Agency Task Force (IATF) for the Management of Emerging Infectious Diseases granted the appeal of Mayor Edgardo Labella to place the city on GCQ instead of modified enhanced community quarantine (MECQ).

“We welcome this development. However, I remind our constituents that we are still under quarantine,” he said.

Although this will mean restrictions will be eased, Labella said authorities will continue to strictly implement the wearing of masks and the social distancing protocol.

“While we reopen, we have to continue observing the health protocol. We have to remember the virus is still here,” he said.

Despite the downgrading of the city’s quarantine status, sequential lockdowns will be implemented in areas where cases of the coronavirus disease 2019 (Covid-19) still surge.

Department of Health-Central Visayas (DOH 7) officials announced in a press briefing on Friday, May 29, their findings on the mass rapid testing in Cebu City.

The DOH introduced zoning of barangays in the city to identify which areas should continue to be on enhanced community quarantine or be placed on MECQ or GCQ status.

In Resolution 41 issued by the IATF on May 29, barbershops and salons will be allowed to open on June 7 with only a 30 percent operating capacity after these establishments were included in Category 3 industries.

As for public transportation, Labella said he will meet with the Land Transportation Franchising and Regulatory Board to discuss the situation once the GCQ will take effect on Monday.

He said he will also collaborate with the Maritime Industry Authority to discuss the opening of ports.

The mayor said an executive order (EO) containing GCQ guidelines will be released on Sunday, May 31.

In Mandaue City, the 120 buses provided by the City Government can cross border control points of neighboring towns and cities, including Cebu City, starting June 1.

The City earlier said the buses could only transport passengers to the northern towns of Consolacion and Liloan and to Lapu-Lapu City.

John Eddu Ibañez, the executive secretary of Mayor Jonas Cortes, clarified that only workers and individuals with essential appointments can ride the buses and cross the borders.

They only need to present their company identification (ID) card and certificate of employment upon entering the bus, he said.

Residents may ride the bus if they have a quarantine pass but they cannot cross the border unless they have exemption, he said.

The fare will start at P11 for the first five kilometers and an additional P1.86 for every succeeding kilometer.

Ibañez said they urged everybody to still stay at home.

Age restrictions (those who are 21 years old under and 60 years old above still cannot leave their houses) and the curfew are still applicable during GCQ, he said.

The downgrading of the quarantine level is for other establishments and companies to operate again so workers can go back to work after two months.

All establishments and companies in the city are expected to secure a special permit to operate.

Ibañez urged them to comply as the Business Permit and Licensing Office will conduct inspections and those who fail to comply will be issued a notice of violation.

The City will continue to implement the number coding of vehicles, market day and basic health protocol, such as the wearing of masks and social distancing, among others.

In Cebu Province, Gov. Gwendolyn Garcia announced during a meeting with mayors of towns and component cities under the Province’s jurisdiction on Saturday, May 30, that she wants checkpoints and border controls taken down.

They agreed during the meeting that this will take place on June 12 to coincide with the country’s celebration of Independence Day.

The governor said restrictions imposed to prevent the spread of Covid-19 have had a great impact on people’s movements and the province’s economy.

"We've had from March 30 or even earlier months of seeing this. Taking away freedom of people with the context of protecting them. Their freedom is curtailed," she said.

On June 3, restrictions on the entry and exit of essential employees in the towns and component cities will be eased. All they have to carry are their company IDs and their certificate of employment.

However, they still have to abide by quarantine protocol like the wearing of masks at all times and observing social distancing, among others.

Local chief executives will have to prioritize the list of constituents who are stranded in other local government units (LGUs) or outside Cebu Province who want to go home.

Liloan Mayor Christina Garcia-Frasco, head of the League of Municipalities of the Philippines, said the list must be submitted before June 5 to give LGUs time to prepare for their stranded constituents’ arrival.

On Thursday, May 28, the Department of the Interior and Local Government announced that quarantine passes will no longer be required at border checkpoints starting June 1. Health protocol, though, will be strictly implemented.

Cebu Province, except for the cities of Talisay and Mandaue, have been on GCQ since May 20.

When the IATF announced that Cebu Province will continue to be on GCQ status until June 15, the governor said she will appeal to place Cebu Province under a state of modified general community quarantine (MGCQ) status.

"But I intend to appeal to that... Because, this is not what the Province intends to do. Di ta magpabilin nga (We will not remain on) GCQ. We should move on to the next level or beyond that because we are ready for that," Garcia said.

During the start of the meeting, Garcia presented figures on confirmed Covid-19 cases in the province and compared these with the number of cases and deaths in other cities and other countries.

According to her, there was no need to be afraid of Covid-19 since it’s just like any other disease that can infect people.

Garcia ordered local chief executives to make their constituents understand how to live with and survive Covid-19 so the Cebu Province can move towards the new normal.

She said it is important for everybody to boost their immune system so they can fight off diseases, not just Covid-19.

"You need to show the public that we are not afraid of this virus. That a positive case is your failure. Do not treat it as you got 65 in school. Most of you get depressed when one of your constituents test positive for Covid-19. That should not be the case," the governor said in a mix of Cebuano and English.

Garcia said she awaits the IATF’s decision on her appeal to place Cebu Province on MGCQ.

Presidential Spokesman Harry Roque announced on May 30 that the IATF has approved Resolution 41, which contains these revisions.

The rest of the country would be under MGCQ, which is a step closer to the lifting of restrictions and the implementation of a new normal. (JJL, KFD, ANV / PJB with a report from MVI of SunStar Philippines)