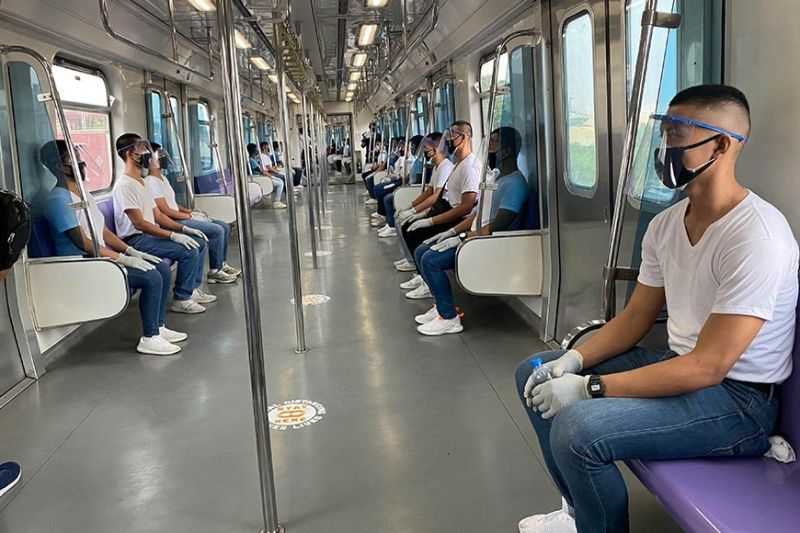 HEAVY traffic and delays in travel are expected Monday, June 1, as Metro Manila shifts to general community quarantine (GCQ) and some public transportation systems are allowed to resume limited operations.

Employees in industries that are allowed to reopen and other authorized persons outside residence should brace for these and adjust their expected travel time, the Metro Manila Development Authority (MMDA) said.

Only authorized persons are allowed outside their residence - workers in permitted industries and non-workers procuring essential goods and services - under GCQ.

Unauthorized persons outside residence (UPORs) should still stay at home. They include persons below 21 and over 60, those with immunodeficiency, co-morbidities and other health risks, and pregnant women.

From Monday until Friday, June 1 to 5, the number coding scheme will remain suspended to facilitate mobility of workers and frontliners.

"Give them time to adjust, kaya wala pong number coding tomorrow until Friday," he added.

Nebrija said they are still finalizing the guideline for the implementation of the modified number coding scheme necessary for the “new normal.”

UPORs who intend to enter Metro Manila should think twice as the Philippine National Police (PNP) will continue to operate checkpoints at the borders.

He said the police will conduct random inspections at border control points to ensure that only Authorized Persons Outside Residence (APOR) would be allowed past the checkpoints and that minimum health standards such as wearing of face masks and social distancing are strictly being observed.

Metro Manila will shift to GCQ starting June 1, more than two months since it went into an enhanced community quarantine (ECQ) to slow the spread of the novel coronavirus, or Sars-CoV-2, which causes the coronavirus disease (Covid-19).

Under GCQ, more business will be allowed to reopen at limited capacity to jumpstart the economy.

Public transportation systems will also be allowed to resume operations at limited capacity.

Nebrija said at least 300 point-to-point (P2P) buses will be allowed to operate starting June 1 to cater to employees who will be going back to work.

The loading and unloading bay will be located underneath the said MRT stations.

The DOTr will utilize the two inner lanes of Edsa for the said modification.

In the first phase of public transport resumption from June 1 to 21, P2P buses, trains, taxis, ride-hailing cars, shuttle services and bicycles will be allowed to operate in a limited capacity and provided that they observe minimum health standards.

Tricycle operations will be regulated by the local government.

For the second phase that will run from June 22 to June 30, public utility buses, modern jeepneys and UV express vans will be allowed to operate.

The DOTr said that to ensure social distancing, passengers of all vehicles, either public or private, should stay one seat apart.

Authorities said that under the new normal, overloading of passengers in the trains and buses especially during the rush hours will no longer be allowed to prevent the transmission of the disease.

In LRT 2, which serves Recto station to Cubao, passenger volume will be reduced to 160 from the previous 1,600 per trip.

The North Luzon Expressway (NLEX) has expressed readiness for the influx of people expected on June 1.

NLEX traffic operations manager Robin Ignacio said among the preparations they made are the repainting and final repair of toll plazas as well as the disinfection of toll booths, establishment of customer service centers, company vehicles, project sites and other facilities to prevent the spread of Covid-19.

To avoid traffic jams especially at the tollgates, all tool booths will be opened and portable collection booths will also be in place.

Ignacio said they are expecting more or less 200,000 motorists by Monday.

The South Luzon Expressway (SLEX) warned of possible heavy traffic during the GCQ transition due to the ongoing construction of the Skyway Extension Project.

Both the NLEX and SLEX are continuously giving free toll fees to medical practitioners who served as frontliners in the fight against Covid-19.

PNP Chief Archie Gamboa said there are two types of APORs during GCQ, namely, the workers of industries allowed to reopen and the non-workers procuring essential goods and services.

Authorities earlier said quarantine passes would no longer be necessary for workers, who would need only to present their company IDs or certificate of employment as proof that they are APORs.

Metro Manila was first placed under GCQ on March 15, 2020, as cases of coronavirus infection started to increase.

Restrictions eased somewhat as Metro Manila shifted to modified enhanced community quarantine (MECQ) from May 15 to 31, 2020.

Aside from Metro Manila, other areas that will shift to GCQ beginning June 1 are:

The rest of the country will shift to modified general community quarantine (MGCQ), the transition phase towards the new normal.

As of May 30, there were 11,972 active cases of coronavirus infections in the country.

The Department of Health (DOH) has confirmed 17,224 cases of coronavirus infection as of May 30, including 950 deaths and 3,808 recoveries. (SunStar Philippines)