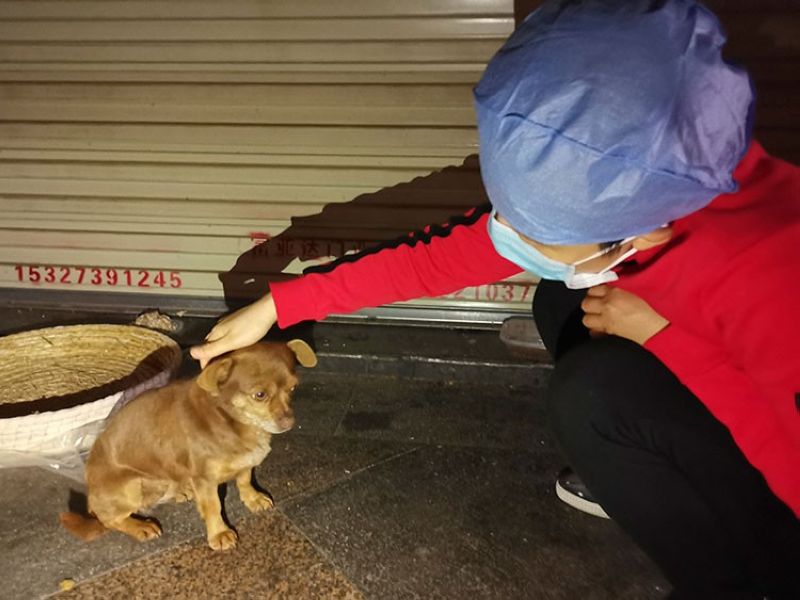 CHINA. In this photo released by Chinese nurse Zhang Dan, she pats Doudou, a street dog she fed near her hotel while working in Wuhan in central China's Hubei province Sunday, April 5, 2020. Zhang was among the first to respond to the call for help in China's coronavirus epicenter. The 36-year-old nurse worked through grueling days, ministering to patients who needed assistance from breathing to merely eating. She struggled — but then, a little street dog helped her through. (AP)

BEIJING — Zhang Dan was among the first to respond to the call for help in China's coronavirus epicenter. The 36-year-old nurse worked through grueling days, ministering to patients who needed assistance from breathing to merely eating.

She struggled — but then, a little street dog helped her through.

Zhang was among 42,600 medical workers brought from around China to bolster Wuhan’s overwhelmed medical system. Hospitals were crammed with patients and field clinics thrown up to handle the overflow.

“I can’t save the world, but I can try my best with my tiny efforts to do what I can do to help,” Zhang said.

Her parents and grandparents worried about her decision to volunteer — and she herself prepared for the worst. She purchased life insurance that would benefit her parents if she succumbed to the illness. Having no children, she figured her husband could start over if she died.

Her husband having returned to his home province for the Lunar New Year holiday, Zhang's mother moved into their apartment in the city of Changchun to look after her plants and four dogs.

Zhang and the rest of her 133-member team had one day of orientation in early February before they were thrown into the fray.

It took 40 minutes to don the protective gear: four layers of protective gowns and gloves, three layers of shoe covers, two hats, two pairs of masks, goggles and a face shield. To avoid bathroom breaks, they wore adult diapers so they wouldn't waste time or gear by taking off the layers and having to dispose them.

The work soon extended to providing daily life care for the mostly elderly patients who were without family members to help them. Zhang sang to the patients to try to raise their spirits, and washed their hair and feet.

“We bought food if they needed it, soap, toothpaste and towels and medicine when there was a shortage,” she said.

It was all so overwhelming. And then the pooch came along.

The small, yellowish street dog had caught Zhang’s eye during her walks. Always with her tail between her legs, she wolfed down the ham Zhang offered. She named her Doudou, or “bean.”

Feeding Doudou became a welcome distraction, and a daily preoccupation. In frigid winter temperatures, she made the dog a vest from part of her scrubs.

By mid-March, teams such as Zhang’s were beginning to pack up. Little Doudou was going to need a permanent home. Zhang posted video appeals on social media, and local pet volunteers offered to help.

As Zhang’s departure date approached, she needed to tell Doudou that they would be parting. “It doesn’t matter if it is animals or people. You need to let them know what is going on,” she said.

Zhang left on April 8, and Doudou was put up for adoption. Home in Changchun, the nurse missed her canine companion and asked for videos.

There were no suitable takers for the little street dog.

Zhang knew she had to give Doudou a home; the deal was done.

Doudou arrived in Changchun earlier this month to join her four playmates, and the nurse who came to love her amid the horror of a pandemic.(AP)