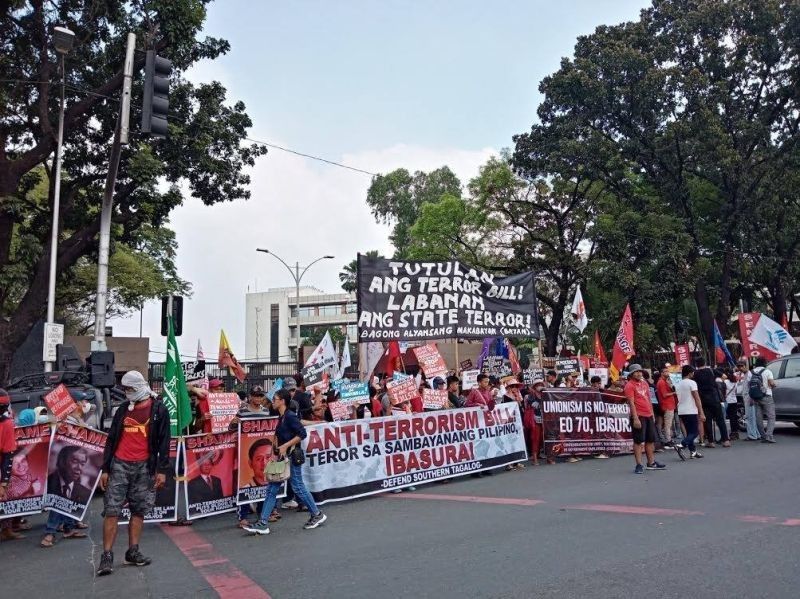 MANILA. Activists protest against the passage of the proposed Anti-Terrorism Act. (File Photo)

(There is no basis for the opposition. I read the proposed measure and it contains provisions that respect human rights.)

(Abuses by law enforcement agencies will be penalized. There is no need to worry.)

Department of the Interior and Local Government Secretary Eduardo Año, a former chief of staff of the Armed Forces of the Philippines, sought support for the proposed bill.

(This is a real threat not only to our nation but to the whole world. These terrorists are planning attacks even while we are under quarantine because of the crisis caused by the Covid-19 pandemic.)

On Friday, May 29, the House committee on public order and safety chaired by Masbate Representative Narciso Bravo Jr. and the committee on national defense and security chaired by Iloilo Rep. Raul Tupas approved the bill which seeks to strengthen the country’s anti-terrorism policies.

If enacted into law, the measure would repeal the Human Security Act of 2007 which Lorenzana earlier described as “toothless and unhelpful” in the country’s present situation.

The law will allow the police or the military to effect warrantless arrests against suspected members of terrorist groups as well as detain them for two weeks with allowable 10-day suspension while case build-up is being conducted.

Police and military may no longer have to pay P500,000 damages per day of detention of any suspected terrorist.

Human rights groups and lawyers earlier slammed the proposed bill for the possible human rights violation once law has been passed into law.

The National Union of People’s Lawyers earlier said the bill will only be used as a “weapon to stifle dissent.”

“The bill would broaden the powers already granted to law enforcement agencies under the Human Security Act, enabling them to conduct lengthier surveillance operations, wiretap and record private communications, access databases, examine bank records, and freeze the assets of persons and organizations suspected of financing terrorism or having connections with alleged terrorists,” the group said. “Those arrested and detained without warrants would not even have the benefit of being presented before a judge, as the bill removed, with no justification, this safeguard written into R.A. 9372,” it added. (SunStar Philippines)