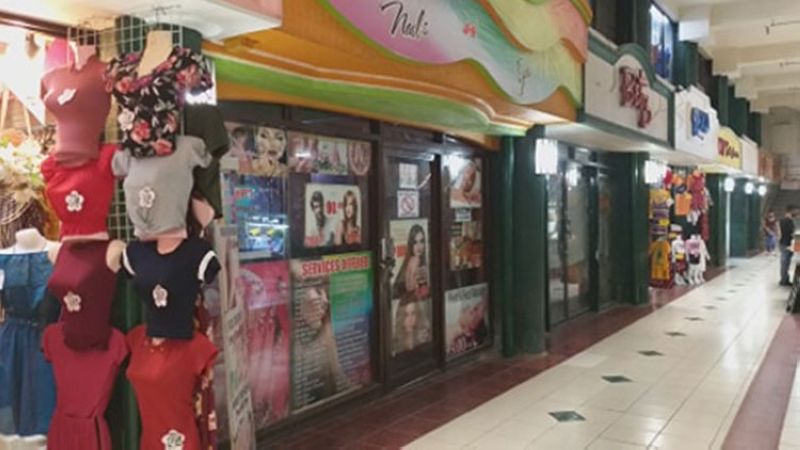 BACOLOD. Salons and barbershops inside the Plaza Mart Building at the downtown area of Bacolod City remain closed Monday, June 1, even if the city is already under a modified general community quarantine. (Erwin Nicavera)

THE Department of Trade and Industry (DTI) in Negros Occidental has yet to wait for the guidelines from the agency's central office in Manila as to the reopening of salons and barbershops in the province, including Bacolod City, which is already under modified general community quarantine (MGCQ).

Under Executive Order (EO) 38 issued by Bacolod City Mayor Evelio Leonardia on Sunday evening, placing the city under MGCQ, barbershops and salons are allowed to operate at a maximum of 50 percent seating or operational capacity.

The EO stated that the reopening date, however, shall be announced at the discretion of the DTI subject to minimum public health protocols specifically designed for the high-physical contact services of these businesses.

These protocols will be published separately, it added.

In another EO issued by Negros Occidental Governor Eugenio Jose Lacson also on Sunday, May 31, it stated that all establishments and activities shall be allowed to operate at full operational capacity with some exceptions.

These include salons and barbershops, which are also allowed to operate at a maximum of 50 percent venue capacity.

These establishments can be allowed to operate at 100 percent venue capacity after three weeks from effectivity of the EO.

Services shall only be limited to basic hair cutting services, it added.

Some opened but for the purpose only of cleaning and disinfecting the establishments.

Rachel Nufable, officer-in-charge provincial director of DTI-Negros Occidental, said that based on the latest pronouncement of DTI Secretary Ramon Lopez, salons and barber shops may resume operations on June 7.

So, technically these establishments are not yet allowed to reopen during the start of MGCQ implementation in the province and city, Nufable said.

"We subjected to monitoring these establishments, whether they operate or not, and provided them advisories on health protocols and guidelines to be implemented," she said, adding that "if there are salons and barber shops operating now, we cannot stop them on our end at DTI-Negros Occidental as the police power is within the local government unit (LGU)."

The DTI official in the province said they have yet to wait for the final guidelines from the head office particularly on the reopening and resumption of operation of salons and barbershops.

"For now, we will just follow that of the National Inter-Agency Task Force and EOs of the city and province," Nufable said, adding that "let us just wait for the final advisory from the central office."