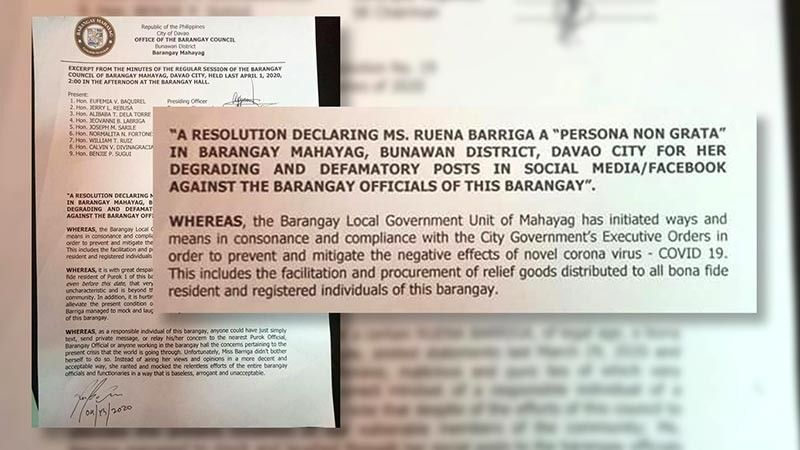 Barangay Mahayag in Bunawan District, through its official Facebook, posted on May 29 a resolution declaring a certain Ruena Barriga persona non grata for her "degrading and defamatory" posts on her Facebook account against barangay officials.

The barangay said in its resolution that Barriga, a resident of Purok 1, Barangay Mahayag, posted statements on March 29, 2020 that the barangay officials considered “very offensive,” “malicious,” and “lies.”

The officials dubbed Barriga statements as “uncharacteristic” and “beyond the correct mindset of a responsible individual of a community.”

However, a Facebook user Oemor M. Bakirel posted a rant accompanied with screenshots of Barriga's deleted post. Although it is not certain if the account belongs to Mahayag Barangay Captain Eufemia Baquirel.

In one of the first screenshots, Barriga complained of the low water pressure at her house that has been happening for several days. She added that they cannot properly observe "proper hygiene" when there is low water pressure.

She then called out Barangay Mahayag officials for their lack of action on the problem.

"Unsa may pulos ninyo? Barangay Mahayag officials asa naman mo na hantos karon wa moy nabuhat solusyon sa problema sa tubig? Mas kailangan sa mga tao ang tubig karon labi na naay virus (coronavirus disease) (Where are the officials of Barangay Mahayag? How come up until now, you have yet to address the problem of our water supply in our area? We need water, especially now during the pandemic)," Barriga said, adding the barangay is taking advantage of the water supply in the area.

In a separate screenshot, Barriga shared a meme of President Rodrigo Duterte warning barangay officials who are not doing a "house to house" visit in their respective barangay, or else the President himself will visit them.

She also claimed that some of her fellow residents, at that time, have not received their food and medicine (FM) passes.

He also denied allegations that the barangay did not conduct a house to house.

Bakirel said that buying 200 sacks to be distributed to 1,865 households is not possible at that time, since stores only limit the purchase to 20 to 50 sacks only.

He also ordered all his staff not to post on social media, and instead, to just do their job.

SunStar Davao tried calling and sent text messages to Baquirel, however, he did not respond as of press time.

Davao City Mayor Sara Duterte-Carpio said in a radio interview on Monday, June 1, that she would still consult the matter to the City Legal Office.

Although the mayor, who is also a lawyer, commented on the matter.

Meanwhile, Integrated Bar of the Philippines-Davao (IBP-Davao) president Maceste Uy told Sunstar Davao in a phone interview that barangays declaring persona non grata has no "binding effect" since the subject of the resolution is a resident of the area.

"The only time na pwede siya pugngan sa iyang pinuy-anan is like karon, nga naa ta'y health emergency sama Covid-19 pandemic, communicable disease (The only time that a resident will be prohibited from returning to his or her residence is when there is a health emergency crisis such as Covid-19, and that the person has a communicable disease)," Uy added.

He also said a resolution is only a sentimental expression, but he said it has no legal effect.

The IBP official also said only the court can set a prohibition on travel called destierro, which means banishment or only a prohibition from residing within a specific kilometer from the actual residence of the accused for a specified length of time.

But in Barriga's case, he said no formal case was filed.

In case officials find maliciousness in the resident's online post, Uy said they can file slander or libel against her.

But he clarified he has yet to review the resolution, he encourages the officials to settle the matter without having to result in a legal basis.

"Siguro dapat dili lang sensitive atong mga barangay officials or mahimong onion skin atong public officers. Dapat pud siguro ato lang kini ipasabot sa constituents kung asa naabot ang kwarta sa gobyerno (I guess that our barangay officials or public officers should not be overly sensitive to the criticisms against them. They should let their constituents understand why there are such delays in the financial support coming from the government)," Uy said.