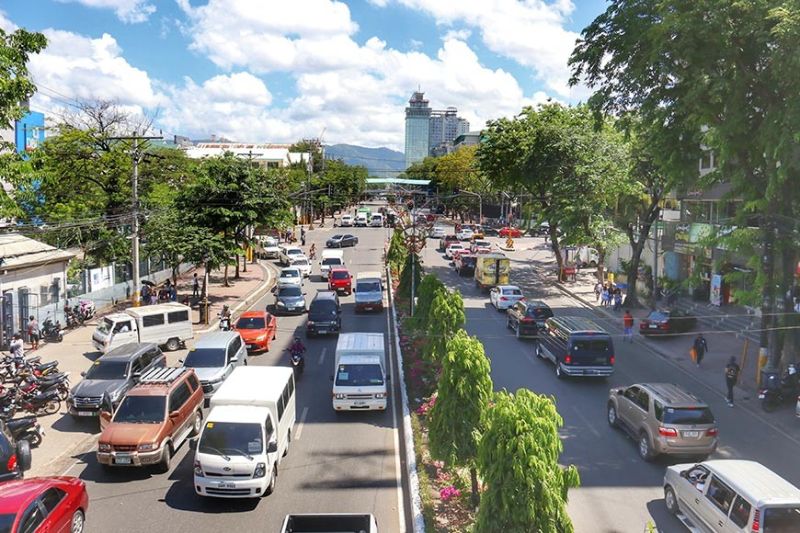 BACK ON THE ROAD. Vehicle traffic has picked up on Osmeña Boulevard on the first day of Cebu City under general community quarantine. (SunStar photo / Amper Campaña)

THE lack of public transportation upset workers who were eager to go back to work on June 1, the first day of the general community quarantine (GCQ) in the cities of Cebu and Mandaue.

But an official of the Land Transportation Franchising and Regulatory Board Central Visayas (LTFRB 7) said what happened on June 1 was “normal,” especially since only buses with special permits were allowed to ply the roads.

In Cebu City, workers were affected by the lack of public transportation

Carlo Toleza, a government employee from Barangay Tisa, said he left the house early in morning so he could catch an early ride to work.

But he was disappointed because no buses, not even modern bus-jeeps (Beeps), passed by to pick up passengers.

A few hours later, Toleza was able to ride a barangay-owned mini-bus that was offering free rides to affected workers.

Toleza said because of his experience, he is contemplating to buy a bike or a motorcycle so he can arrive at work early.

Toleza was just one of many Cebuanos who were returning to work that were greatly affected by the lack of public transportation.

In Mandaue, buses provided by the City Government to transport passengers going to Cebu City are yet operational.

Mayor Jonas Cortes said that the Mandaue-Cebu City buses have yet to secure a special permit to operate with the Land Transportation Franchising and Regulatory Board (LTFRB).

According to Cortes, it was initially decided that Cebu City will be under modified enhanced community quarantine so the buses going to Cebu City will only travel until the border.

It was only this weekend that the two cities were placed under GCQ.

On June 1, 40 buses plied between Mandaue City and neighboring towns and cities.

Cortes said that on the first day of the GCQ, the bus interval is every 15 minutes, and added that there will be more vehicles in the coming days.

As bus rides will be part of the new normal, Cortes said they are looking for ideal bus stops for the convenience of commuters and to cater to more passengers.

Meanwhile, Cortes expressed sympathy for displaced jeepney drivers in Mandaue City. He explained that the City must comply with the guidelines provided by the national government.

In support, Cortes has requested the management of Ceres Liner to hire the displaced drivers as bus drivers or conductors.

The bus company, which accepted the request of Cortes, said that the drivers need to submit their biodata.

In Lapu-Lapu City, Mayor Junard Chan told SunStar Cebu that jeepney drivers in Lapu-Lapu City are asking whether they could cross the border of Mandaue City which is under GCQ.

According to the LTFRB, only buses can cross the borders, said the mayor.

Since jeepneys cannot cross borders, the Mayor’s office will create an improvised route for them.

The City will then assign them respective routes, which are different from their usual path.

For their part, LTFRB 7 Director Eduardo Montealto Jr. said they already prepared 17 routes in Cebu City where buses and modern jeeps could pick up passengers.

But even if they allow buses and modern jeeps to traverse the streets, Montealto said there should be not more than half of their regular capacity, including the driver.

Montealto said that more buses, mini buses and modern jeeps will be on the road in the coming days considering that many operators applied for special permits at the agency.

Aside from the special permit from LTFRB 7, bus operators must secure a Provincial Public Utility Pass (PPUP) to ply routes within Cebu Province.

With the bus terminals for South and North Cebu temporarily placed in Consolacion town and Talisay City, Montealto said they have deployed additional buses along the terminals to ferry passengers to Cebu City.

In the meantime, LTFRB 7 will monitor areas where large concentrations of commuters gather so they can deploy buses or modern jeeps to these areas.