Bike demand up, but supply is low 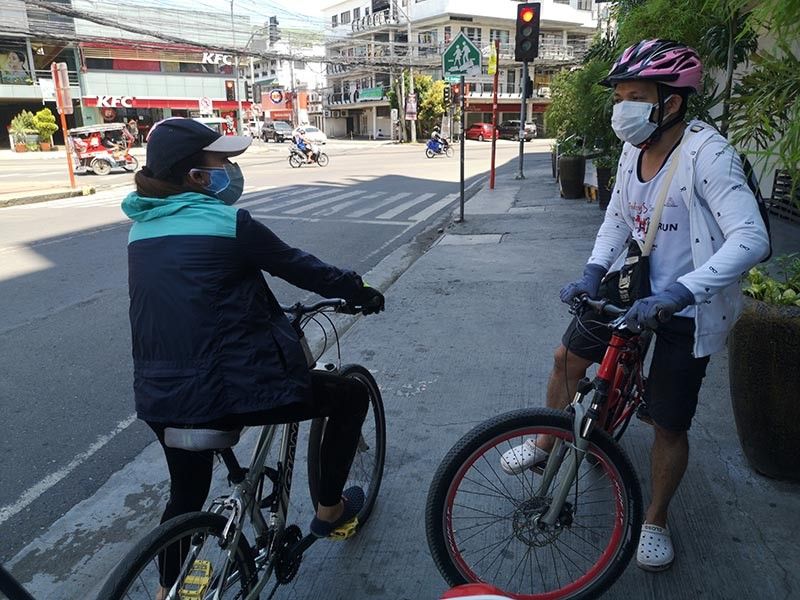 DAVAO. Due to the limited public transportation during the Covid-19 pandemic, more Dabawenyos are turning to bikes to get to where they need to be. However, as the demand increases, the supply is slowing down due to the impacts of the pandemic. (Macky Lim)

THE coronavirus disease (Covid-19) pandemic not only digitized business operations. It also brought the people’s attention to the helpfulness of the often unrecognized self-propelled transportation.

Biking to work is among the implications of the new normal due to its efficiency when mass transportation was suspended during the enhanced community quarantine (ECQ) in various parts of the country, Davao City included. And there are no signs yet that it will be gone soon even if public utility vehicles have returned plying the city streets.

For a country that only sees bikes as a less preferred mobility option, middle to low-income households found the need to, at least, own a bike amid the Covid-19 pandemic. The sudden need to own a bike for work or personal errands may mean bike shops will have a relative share of the people’s budget. And this gives the impression that their sales will increase.

To the Davao bike shop owner with a large and spread out connection of suppliers, the boom of bikes was nowhere a boon in their industry, and eventually, to the working class using bikes to report to work.

EZ Ride Bike Shop general manager Eduardo Martin Zaldivar shared that bike demand in his shop doubled in the past months compared to their sales before the pandemic. Mountain bikes were also selling fast and people were willing to spend around P7,500 to P10,000 worth of bikes.

This could have helped them pay their workers, rents, and bills but the struggle in getting the supply of bikes rendered an opposite outcome.

Zaldivar sourced his bike supplies from Luzon and Visayas, as well as contacts from major foreign bike suppliers such as in Taiwan, China, Singapore, Thailand, and California. As Covid-19 affected the world, so does its influence in the bike purchasing behavior.

“Mas prolonged ang quarantine sa Luzon. So didto pa lang hurot na ang bike (Luzon experienced a longer quarantine so bikes already ran out there). And globally, demand is at 200 percent but the production of bikes is down to 50 percent,” he said.

Zaldivar, who is also a trained mechanical engineer, attributed the slow production rate to the bike’s labor-intensive nature. It also requires diverse materials to assemble.

“It uses welded steel or aluminum that needs skilled workers. Rubber for the tires still grows on trees. And rubber trees only grow in very specific climates, making it tricky to plant,” he said.

He said the Covid-19 restrictions have minimized the movement of the skilled labor force and worsened by the trade war between China and the United States in 2019.

These factors caused the increased demand in bikes resulting in just a break-even income for bike dealers.

“This sudden burst in sales cannot compensate for the losses of almost two months of no income. You can also earn enough to pay out all your outstanding balance to suppliers. And since there is a global shortage, there are no goods coming in, we see lean months ahead,” Zaldivar said.

“For reasons, distributors will now hesitate to send fresh batches to local bike shops, as the products will not suffice for all sub-distributors. Second, not all of the said sub-distributors made it to break even and still have a balance to pay, crippling the capacity of the distributor,” he added.

The projected low bike supply would also mean fewer working class will be able to use bikes to report to work along with the looming potential overpricing, especially those dealers selling in unregulated marketplaces.

Zaldivar shared a screenshot of a bike dealer selling a second-hand NRX 26er bike in a Facebook group for P8,000.

He said the bike was overpriced since it can no longer be sold as high as P2,000 since six months ago.

“Mapalit nimo ni sa surplasan at P1,900 with hangyo or if wholesale (You can just buy this at a surplus store at P1,900 and you can still bargain or lower if bought in wholesale). In today's market, it probably costs P2,500,” he said.

Unless someone calls the seller out, buyers would fall into the trap. However, their influence will be limited since there are no concrete regulations for online selling.

He urged bike sellers to be sincere with their customers and price the product fairly.

“Be sincere to your customers. Do not bask on your sudden popularity. The sudden focus on bikes does not make bike dealers and mechanics into celebrities, it makes us consultants at most,” he said.

“Understand that we are here to guide and educate new cyclists. We are here to ensure they are equipped with the correct knowledge to venture out pedaling on public roads. These bikes are their means of providing for their families and participating in the economy,” he added.

Despite reservations of being able to fully cater to the sudden need for bikes, they still welcome it as a way to help the economy as biking can be used for work or for business.

“Self-propelled vehicles will encourage local small and medium enterprises to continue their businesses,” he said.

He said biking customers can go directly to home-based businesses to get their orders, cutting the expense of renting physical stores and stalls in malls or for signing up with delivery mechanisms.

To make this possible, safe bike lanes are necessary coupled with fostering mutual respect and road safety knowledge among drivers, riders, and cyclists.

“Mutual respect comes from mutual knowledge of the traffic laws. Road safety springs from this respect,” he said.

On Monday, June 1, the City Government of Davao reviewed and promised to implement the long-overdue City Ordinance 0409 or “The Bicycle Ordinance of Davao City.”

“Daghan og requirements ang atong Bike Ordinance but sa pagkakaron, para madali ta, unahon sa nato ang pagka connect-connect sa ruta and ang demarcation (The Bike Ordinance has a lot of requirements but we will prioritize the routes and its demarcation),” she said in her interview on 87.5 Davao City Disaster Radio on June 1, 2020.