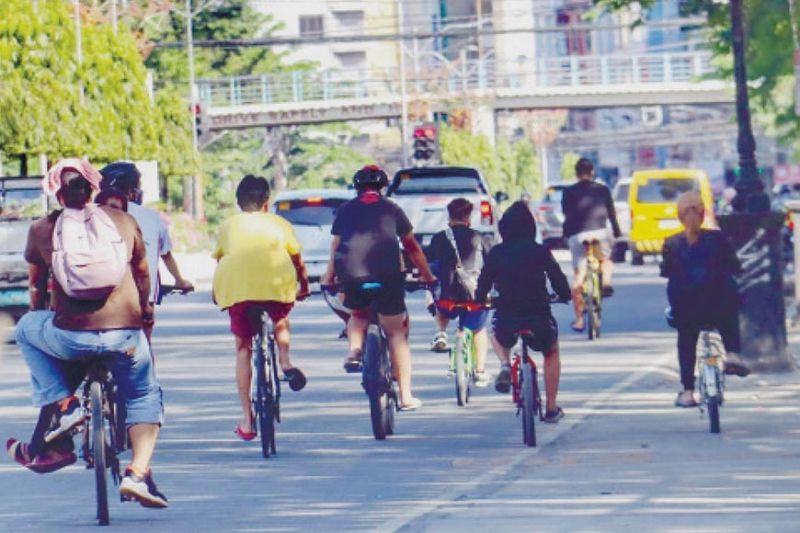 NEW TRANSPORT MODE. Due to the lack of public utility vehicles in Cebu under general community quarantine, residents choose to bike to their destinations despite the heat and safety risks. (Photo by Amper Campaña)

THE Mandaue City government supports the advisory of the Department of the Interior and Local Government (DILG) to establish bicycle lanes within local roads.

Even before the Covid-19 crisis, the city had planned to develop bike lanes along Centro area, Poblacion area, North Reclamation and South Reclamation area.

The reclamation area will be developed as a commercial hub.

The development of the area is meant for the walkability of the residents and so that those who opt to bike to work can utilize the roads and sidewalks of the city.

Ibañez expressed his support for the utilization of bicycles to also ease the city’s traffic situation.

But Ibañez also encouraged bikers to install lights on their bikes for their safety and for them to be visible to big vehicles.

Residents in Mandaue City who have been using bicycles since the enhanced community quarantine (ECQ) also support the measure.

Edcel Alarin, 42, a resident of Brgy. Looc, said bike lanes within the city roads could help promote safety for bikers and pedestrians.

He told SunStar Cebu that due to the suspension of public transportation, he has shifted to using a bicycle to get essential goods for his family.

With bike lanes along city roads, Alarin is confident with riding his bike without being sideswiped by bigger trucks.

Like Alarin, 34-year-old Benjie Dinoy of Brgy. Tipolo also prefers to ride a bike to work as it helps him save money.

Dinoy said even if public transportation will resume operation during the general community quarantine (GCQ), he will still continue to ride a bike for economical reasons.

The popularity of bikes during the quarantine period has been a boon for bike sellers in Mandaue City.

Bike reseller Joel Conde, 53, said he has received a lot of customers since the ECQ.

He said riding a bike is advantageous as cyclists are exempted from traffic laws such as the number coding scheme and they can ply almost anywhere.