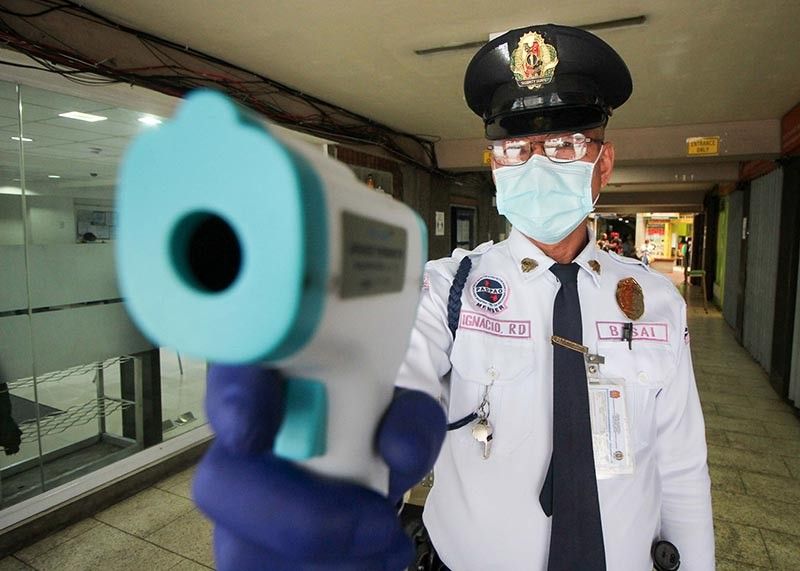 A security guard checks temperature in compliance with health protocols to fight the spread of Covid–19. (Photo by Jean Nicole Cortes)

Mayor Victorio Palangdan said the two are the latest cases in the province after a string of recoveries were logged last month.

The chief executive explained the two male jail officers were based in Manila and were ordered by the Bureau of Corrections to transport cadavers from Nueva Vizcaya and Benguet.

Both are now confined at the Benguet General Hospital and in stable condition.

The mayor said contact tracing for the male patient from Barangay Ucab is done while a similar move is being undertaken for the other patient from Labilan, Loacan in Itogon.

As a safety protocol, total lockdown was placed until further notice in sitios Sabkil, Tocmo, Labilan and Bakon in Barangay Loacan.

"We conducted checkpoint in all entry points including different puroks have their own checkpoints, we are very careful in protecting our town," Palangdan added.

Palangdan urged stakeholders to be vigilant; stay in their homes; wear face masks; physical distancing must be observed as well as scheduled market days should be followed.

Curfew hours is still in effect from 9:00 p.m. to 5:00 a.m. with liquor ban still being implemented.