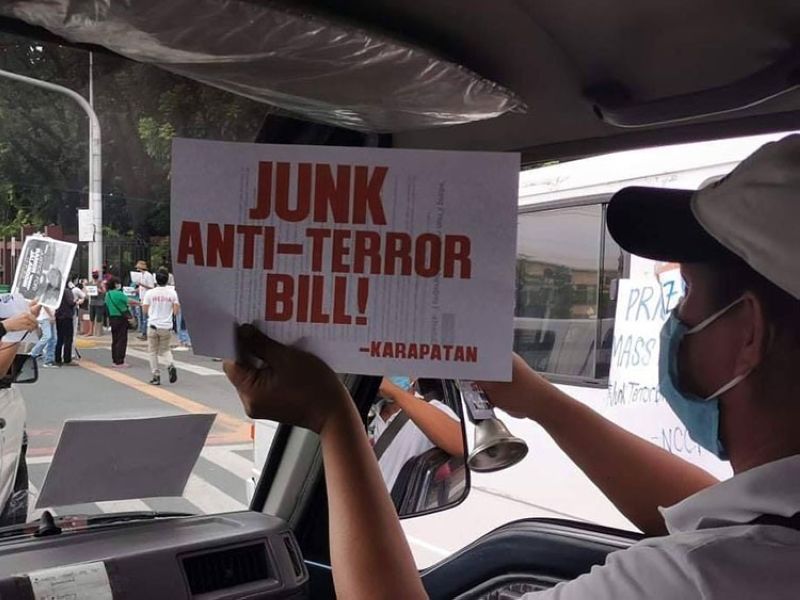 HUMAN rights advocates on Wednesday, June 3, held protests in front of the House of Representatives and at the University of the Philippines Diliman against a new anti-terrorism bill that President Rodrigo Duterte wants Congress to approve.

House Bill (HB) no. 6875, which will replace the Human Security Act of 2007, was approved on second reading by the House of Representatives Tuesday, June 2.

“The proposed measure will not only impact the rights of political dissenters and activists. It will impact on all who value freedom of expression, as this will redefine acts of terrorism that will encompass any and all forms of opposition, social critique and commentary,” she said in an interview.

Palabay added that the group is willing to bring their grievances to court if the House approves the bill on third reading.

“Karapatan will be ready to challenge the said measure if passed into law at the Supreme Court and in all avenues possible,” she said.

If passed into law, the bill would allow warrantless arrests, monitoring, and detention of suspected terrorists.

Karapatan was among the groups that joined a protest rally in front of the House of Representatives Wednesday.

At the UP Diliman campus, members of the College Editors Guild of the Philippines (CEGP) marched to express their opposition to the new anti-terrorism bill.

The group said the national government must instead focus on conducting mass testing for the novel coronavirus, or Sars-CoV-2, instead of prioritizing the anti-terrorism bill.

“Instead of passing detrimental policies, the state must heed the people’s demands by giving immediate economic and medical aid to people who were gravely affected by the Covid-19 pandemic,” said CEGP national president Daryl Angelo Baybado.

Baybado likened the bill to martial law as it “fans the flame of red-tagging.”

In a joint statement, the National Union of Journalists of the Philippines (NUJP) also condemned the proposed anti-terrorism bill as it poses “mortal danger” to the principles of freedom of the press and of expression.

The group cited Section 9 of the HB 6875 which states that terrorism is committed “by means of speeches, proclamations, writings, emblems, banners or other representations of the same.”

“In effect, reportage on persons and groups deemed terrorist, or even merely repeating what they say, could be interpreted as committing inciting to terrorism,” the group said.

“We all agree that the fight against terrorism is important and needs the participation and cooperation of everyone, we maintain that the proposed law is open to abuse by despotic governments to visit terror against critics and the people in general,” it added.

The Commission on Human Rights (CHR), for its part, noted that the measure has a “broad definition” of terrorism.

“Such overreach may be seen as disproportionate and highly intrusive as it allows for room for discretion which could be possibly used to limit substantial freedoms, including expression of dissent and critical perspectives most especially by civil society and human rights groups under a democracy,” CHR spokesperson Jacqueline de Guia said in a statement.

De Guia warned that the bill authorizes 14 days of detention which may result in human rights abuses.

“Prolonged detention under the bill up to 14 calendar days, with the possibility of extending it to 10 more days, may result to cruel, inhuman, and degrading treatment or torture, which does not only pertain to acts of interrogation, but also conditions experienced by the suspect,” she said. (SunStar Philippines)