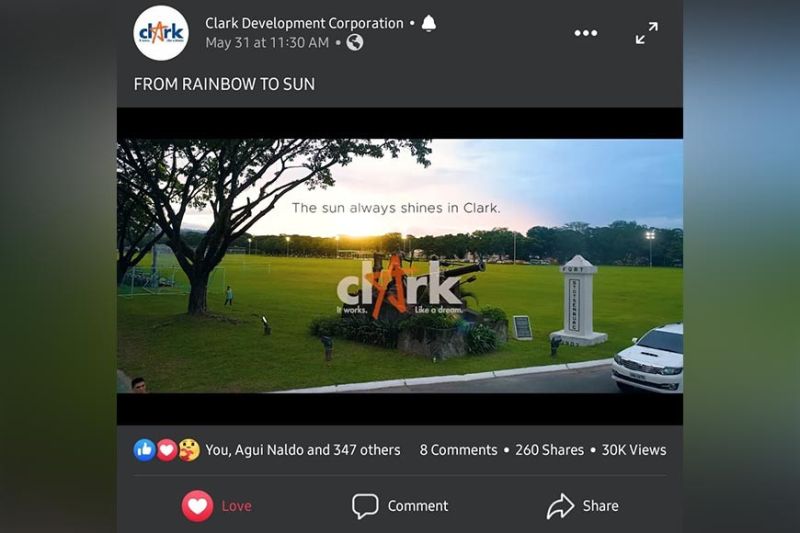 PAMPANGA. Aiming to inspire and uplift the spirits of Clark communities amid the pandemic, Clark Development Corporation posted a video that depicts the unrivaled beauty of Clark Freeport Zone. Signifying optimism despite these trying times, the video garnered numerous views and positive feedback. (CDC-CommDep)

CLARK FREEPORT -- The latest music video by the Clark Development Corporation (CDC) titled "From Rainbow to Sun" has earned 24,000 views in its first 24 hours of posting.

The music video, which captured the hearts of the netizens, has gone viral after gaining 1,000 views per hour on the very first day it was uploaded on CDC's official Facebook page.

One netizen, Kimberly Strong, was astounded in the beauty of the Freeport. "How I wish Clark's clean environment will be like those in other areas outside of Clark. No rubbish, you'll only see green grass everywhere and there's no pollution."

With the positive reactions and numerous shares on social media of "From Rainbow to Sun," CDC's Facebook page obtained more followers. This is apart from consistent posting and up-to-date information and guidelines to locators and business updates inside Clark.

The music video was produced by CDC Communications Division on work-from-home basis except for fresh footages such as the iconic bridge now being constructed to connect the Freeport with New Clark City in Capas, Tarlac.

Earlier, CDC also produced a music video dubbed as "Greys to Colors," which depicted the "resiliency of Clark" in showing the beauty of its colors, its smiles, and its people.

The music video was dedicated to frontliners and healthcare workers whose selfless intention was to contribute for the safety of the people against the novel coronavirus.

Former CIAC president Victor Jose Luciano, in his comment, said "it's a beautiful video up to the end showing scenic Clark blended to the selfless dedication of CDC's people and frontliners. And the background music gave it more inspiration to be a must-watch magnificent portrait of Clark in these trying times! Congratulations Clark! Congratulations CDC!" (PR)