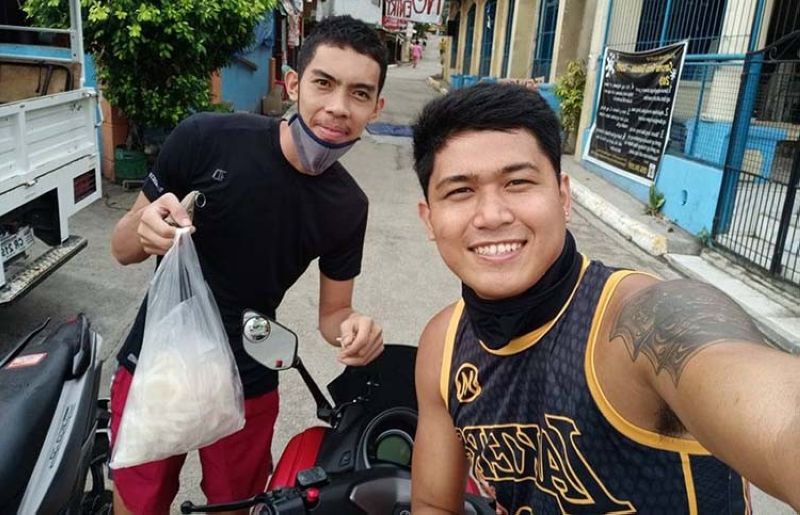 Allan Sala, who is widely known in the panalay circuit, is now selling goods online to help support his family. (Contributed photo)

WITH the 2020-2021 season of the Maharlika Pilipinas Basketball League (MPBL) scuttled and contact sports still prohibited by the government, which means the indefinite banning of basketball games, players who leaned on the sport to earn a decent living must now look for other means to sustain their respective families.

With the next MPBL season tentatively scheduled on June 12, 2021, current players have over a year of downtime. And with a league memorandum advising teams to pay just 20 percent of a player’s current contract during this time, some players are now resorting to other ways of making money other than putting the ball into the basket.

There are some like “panalay” standouts Russel Moneva and Allan Sala, who are now selling goods online.

“These past few months have been very hard. When this pandemic started, panalay games also ended. It means, we, players have no source of income. I am using my savings for my family’s everyday needs, but sooner or later, I know for sure it won’t last long, especially when basketball is still not allowed,” said Moneva, a spitfire point guard who represented the Philippines in the Jump10 World hoops Challenge in Shanghai, China. “But as a way to cope with all our expenses, I decided to sell online. Although what I’m earning right now is not the same as what I had during panalay, it’s better than nothing.”

Sala, on the other hand, has turned to selling seafood products online to earn enough for their daily expenses.

“It’s really hard for us who rely on our income in panalay. I’m just now thinking every single day what we can do to earn money for our daily needs and make any ways to survive this crisis. I’m into online selling now for us to earn and survive every day. I’m hoping and praying to end this pandemic so everything will go back to normal,” said Sala, a bull-strong wingman from Lapu-Lapu City.

There are some players, like former Iloilo forward Mac Racho and former Rizal guard James Regalado, who are now looking for other day jobs.

“Basketball was my only source of income. After the league stopped, my contract stopped as well. And since basketball games are not allowed right now, there aren’t any opportunities to play panalay, which would have been easy money as well. This crisis has really made me think of not relying on basketball anymore to provide for my family, ” said Racho.

“It’s sad that all these things are happening. I have a family to support, and basketball was my only source of income. And with the MPBL being cancelled, I’ve really been placed in a difficult situation,” said Regalado.

Some players are now looking at putting up their own small businesses to help them get by this crisis.

“Not having any basketball games is disheartening, but on the bright side, I have learned how to make money not just from basketball but from small businesses,” said former Cesafi Mythical Five forward Monic Soliva, who is now based in Negros Oriental.

Bataan point guard Joseph Nalos said it was frustrating at first to hear of the MPBL’s cancellation of the upcoming season, especially with all the hard work he had put in to prepare for it. But the former Southwestern University-Phinma standout understands that it is what’s best for everyone.

“It’s really frustrating. I felt really down because I put in extra work during the lockdown to prepare for the opening. Then I heard the news about the cancelation,” Nalos said in Cebuano. “This is very difficult for those who have families to support. But let’s just stay positive because I know God has other plans.”

Davao Occidental guard eman Calo said he is fortunate enough to have some savings tucked away, but he knows that the longer this pandemic drags on, the harder it will be for him and his family, especially with a baby on the way.

“It’s good that I was able to save some of my salary with the Davao Occidental Tigers-Cocolife, but as this drags on, my savings will be depleted,” the former University of the Visayas guard said in Cebuano.

One player who is taking the time to bond with his newborn is former Cebu Shark guard Iron Suano.

“Right now, I am taking care of my six-month-old child. I am also gaining good memories from taking care of her because some fathers don’t have the chance to witness childhood milestones with their children. During this pandemic, I’m glad and proud to be still productive,” said Suano.