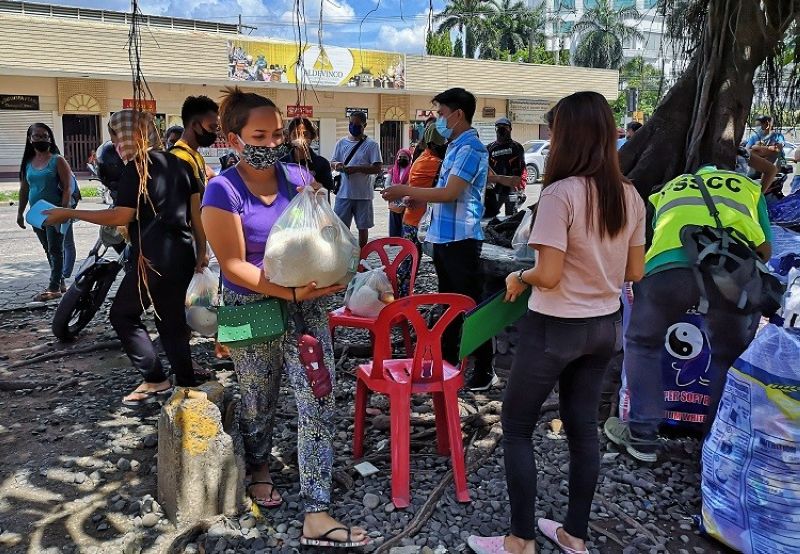 DAVAO. Davao City Social Welfare and Development Office distribute food packs to 376 Roxas Night Market vendors yesterday at Freedom Park. Following the shift to the general community quarantine, the city will continue to provide assistance to workers who are part of businesses that are not allowed to operate during these times. (Photo by Macky Lim)

A SURVEY by the University of Mindanao-Institute of Popular Opinion (UM-IPO) showed that Dabawenyos are satisfied with how the Davao City Government is handling the coronavirus disease (Covid-19) pandemic.

According to the survey, 76.4 percent of Dabawenyos were satisfied, 6.8 percent said they were not, while 16.9 percent did not respond.

For those who said they were satisfied, 35.8 percent said they were mostly satisfied in the strict implementation of the Inter-Agency Task Force on Emerging Infectious Diseases (IATF-EID) guidelines, especially in the strict social distancing. Meanwhile, 21.1 percent were satisfied in the city's relief operations, followed by the local initiatives on community quarantine (17.9 percent), "decisive" leadership of Mayor Sara Duterte-Carpio (10.6 percent), social amelioration program (7.3 percent), efficient contact tracing and medical-related services (4.1 percent), free transportation (0.8 percent) and its agricultural support program (0.4 percent). Meanwhile, 2 percent did not respond.

A majority of those who were not satisfied cited premature lifting of quarantine as the reason (40 percent), 34.3 percent cited unfair relief distribution and response, 11.4 percent cited concerns on mass testing/contact tracing and 5.7 percent for unclear guidelines or people not understanding guidelines. Those with no response or who preferred not to comment composed of 8.6 percent.

When asked on what suggestion they can offer the local government to improve its services during Covid-19, 22.6 percent responded strict implementation of pertinent law and guidelines, followed by the continuity of the localized community quarantines (15.7 percent), making the rations or relief distribution fair and fast (9 percent), consistent implementation of guidelines (8.8 percent), and mass testing and provision of personal protective equipment (PPE) (8.2 percent).

Respondents showed a very high level of awareness on the manner by which the national government handled the Covid-19 pandemic (95.2 percent) while a few of the respondents expressed non-awareness (1.6 percent) and opted to not respond on the question (3.2 percent).

Only those respondents who professed awareness were asked whether they have availed of the services. Of those who were aware, 82.7 percent were able to avail of any program, measure, or effort of either national or local government to combat the pandemic, while 15.4 percent were not able to avail and 2 percent did not give any definite answer.

Satisfaction rate towards national government efforts, which was taken from the population of those who were aware and have availed, was considered generally good, such that 7 in every 10 of them expressed satisfaction on the services, programs and relief efforts.

Meanwhile, 15.2 percent of those who availed said that they were not satisfied while 16.6 percent expressed no definite answer at the time of the survey.

Respondents were mostly satisfied with the quick implementation of community quarantine, the Social Amelioration Program, and the creation of guidelines, protocols and precautions through the IATF.

On the other hand, respondents expressed dissatisfaction and disappointment in the following areas of concern: mass testing/contact tracing, the fairness of the Social Amelioration Program, slow relief efforts and abuse of power of officials.

UM-IPO, from May 20 to 31, conducted a sponsored online survey targeting Dabawenyos 18 to 65 years old to assess the current relief efforts of the city government, as well as the national government relative to the Covid-19 pandemic.

The survey focused on knowing whether Davaoenos were aware of how the government is handling the pandemic, whether they or their family members availed of the services, and whether they were satisfied with these programs and projects to fight the Covid-19 pandemic.

UM-IPO did the survey online as physical contact was not allowed during the time of conduct of the study.

It said it relied on targeted advertisements on Facebook users who matched the predetermined criteria within the defined geographical radius.

"These mechanisms were done to ensure getting responses from the three districts despite non-randomness of the procedure. The survey yielded N=376 responses after certain quality checks were made to each respondent," UM-IPO said in a press release. (RAG with PR)