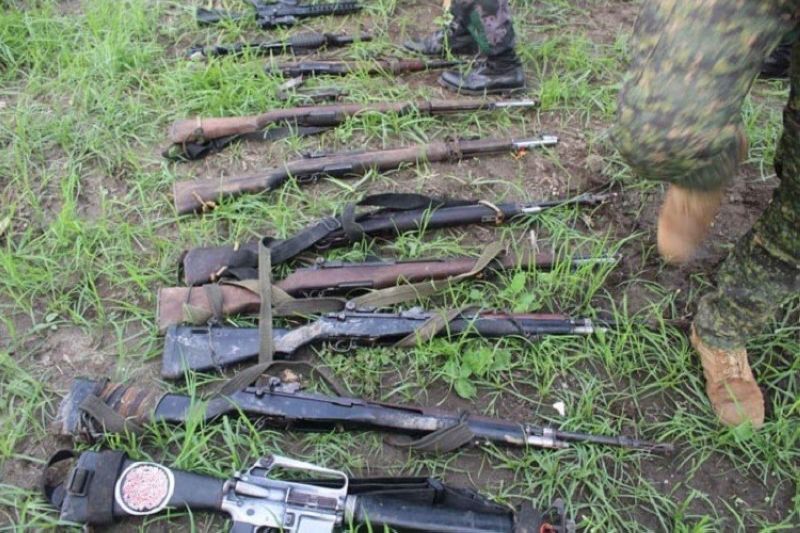 ZAMBOANGA. Five suspected members of the Bangsamoro Islamic Freedom Fighters were killed while nine others were wounded in a clash with government forces in Sultan Kudarat province. A photo handout shows the firearms seized from a BIFF leader and 15 followers who were captured during the firefight Thursday, June 4, 2020. (SunStar Zamboanga)

FIVE alleged members of the Bangsamoro Islamic Freedom Fighters (BIFF) were killed while nine others were injured in a firefight that also resulted in the capture of a BIFF leader and 15 followers in the province of Sultan Kudarat, officials said Friday, June 5.

Mamon said the firefight ensued as the troops of the 40th Infantry Battalion launched a law enforcement operation against the group of Tugali Guiamal Galmak in Purok Galmak, Baumol village, Lambayong.

Mamon said the firefight resulted in the death of five followers of Tugali and wounding of nine others.

He said Tugali and 15 of his followers were captured. Recovered from them were 15 high-powered firearms.

Mamon said Tugali, before joining the BIFF, was a member of Pentagon kidnap-for-ransom-group operating in Central Mindanao.

Major General Diosdado Carreon, Joint Task Force Central commander, said the BIFFs were even reinforced by around 20 gunmen coming from Langgapanan village at the height of the firefight.

Carreon said the BIFF members fled to different directions as the troops outmaneuvered them.

Lieutenant General Cirilito Sobejana, commander of the Western Mindanao Command, lauded the troops of the Joint Task Force Central for their numerous gains that greatly contributed to the mission accomplishment of the command.

“Carry on your good work for the peace-loving people of Central Mindanao and for our beloved country,” Sobejana added. (SunStar Zamboanga)