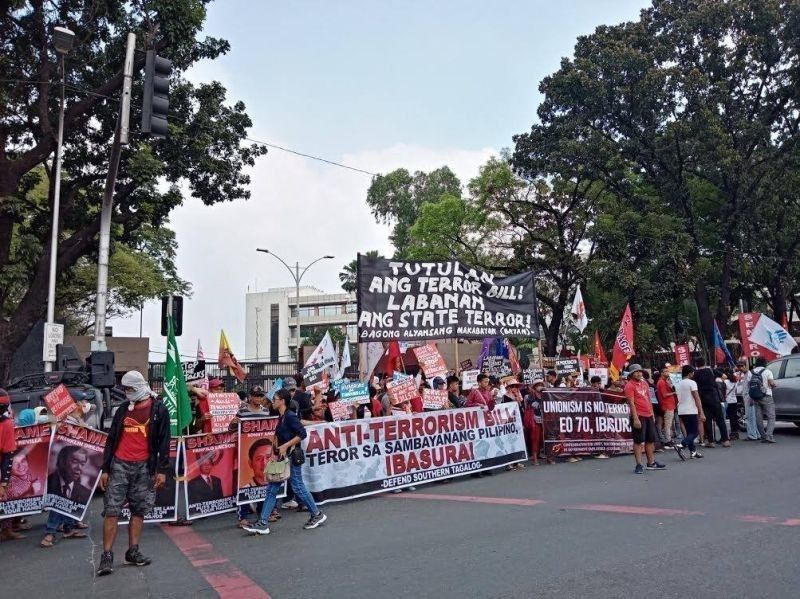 EIGHT business groups, the De La Salle brothers and the Jesuit priests of Ateneo have joined several other sectors in denouncing the railroading of a new anti-terrorism bill at the House of Representatives and voiced their opposition to some of the measure’s provisions.

In their joint statement issued Friday, June 5, the business groups said the proposed measure, Senate Bill 1083 and House Bill 6875, is “highly divisive - because it poses clear and present danger to human rights enshrined in our Constitution - at a time when our nation needs to come together as one.”

“We are all suffering and fighting for survival: businesses are closing down, people are losing their jobs, those who still hae jobs find it impossible to find safe transportation to work, our children are going hungry and the continuity of their education is under threat,” they stated.

They urged the country’s leaders and the private sector to instead focus on developing policies that will address the multiple socio-economic shocks caused by the coronavirus disease (Covid-19) pandemic, strengthen the health system and improve the investment climate to create more jobs.

“These are what our country needs to pull us out of our crisis and get back on our feet,” they said.

JUST IN. Aside from the academe, 8 business groups express opposition to the new anti-terrorism bill. pic.twitter.com/l8SVPtmoYe

In their statement Friday, they appealed to President Rodrigo Duterte to listen to the people’s pleas and veto the measure.

“We can then all work together to craft a better version that can uproot terrorism while addressing the people’s concerns about their basic rights. By so doing, we will not be divided in countering terrorism,” they said.

They pointed out that many provisions of the bill are “couched in language that is sweeping and equivocal as to be easily subject to misinterpretation and abuse.”

“Worrisome are the expanded and vague definition of a ‘terrorist’, the powers given to the Anti-Terror Council to designate a group as a ‘terrorist group’, the weakening of the protection of one’s privacy and the safeguards against arrests and detention without warrants,” they said.

They warned that, in the wrong hands, the measure can be used to oppress the people.

UNIVERSITY: The De La Salle Brothers and Philippine Jesuits have come together in declaring their opposition to the Anti-Terror Bill. | via @DLSU pic.twitter.com/kkiSc91tP0

The College Editors Guild of the Philippines also condemned the law which they tagged as a “misplaced interest” of Duterte and his cohorts.

The group said the government should instead focus on providing economic and medical aid to those hit hard by the crisis caused by the coronavirus disease (Covid-19) pandemic.

"Instead of passing detrimental policies, the state must heed the people's demands by giving immediate economic and medical aid who were gravely affected by the Covid-19 pandemic," said CEGP national president Daryl Angelo Baybado.

“Passing this bill is just a manifestation that Duterte’s de facto martial law is indeed legitimized by the legislative branch of the government. As this administration’s war against its critics makes it easier to brand dissenters as terrorists, this bill does nothing but fan the flame of red-tagging and continues to endanger the lives of the Filipino people,” he added.

The Confederation of Publications of the Ateneo De Manila University - composed of student publications Heights Ateneo, The GUIDON, and Matanglawin - also said in a statement that the administration “seized the plight” of vulnerable Filipinos as a means to “stifle their calls for help.”

“Beyond finding solutions to combat the virus, our public officials must heed the underlying causes of dissent by strengthening their support for our democratic institutions and improving social development programs to ensure that no Filipino is left behind,” it said.

Green groups under the Kalikasan People’s Network for the Environment and the Environmental Defenders Congress, together with several other organizations said the new anti- terror bill could intensify the “already worsening attacks” on environment defenders.

They noted that the Philippines has been declared as the deadliest country in the world for land and environmental defenders.

“The administration tries to establish a de facto dictatorship, while the people remain distracted to the pandemic,” Leon Dulce, national coordinator of the Kalikasan People’s Network for the Environment (Kalikasan PNE) said.

Environment advocates and groups have launched an online petition where a total of 1,063 individuals, and 177 organizations in the Philippines have signed up to express opposition to the law.

In defense of the measure

Philippine National Police (PNP) Chief Archie Gamboa said the highly criticized measure will strengthen the government’s ability to protect the people and the land from the prevailing threats being posed by terror groups not only in the Philippines but also abroad.

“The amendments to the Human Security Act of 2007 that were introduced in the Anti-Terrorism Act of 2020 will update and strengthen the country’s anti-terrorism policies,” said Gamboa.

He cited the terrorist attacks in New York in 2001, London in 2005, Rizal Park in Manila in 200 and the infamous Marawi siege in May 2017 which claimed thousands of lives.

““We can only say better late than sorry even if we are the latest country in Asia-Pacific to pass a law that ciminalizes terrorism. But definitely there ought to be a law,” said Gamboa.

For his part, Armed Forces of the Philippines (AFP) spokesperson Brigadier General Edgard Arevalo said the new law will not give them additional power as it was not substantially different from the country’s present anti-terror law.

“We reserve further comment until the proposed legislation is signed into law by the President and the IRRs are out so we can study the law and the how’s of its implementation,” he said.

“But from what has been reported to me so far is that nothing in the Enrolled Bill to be sent to the President for his consideration adds any new power to the Armed Forces of the Philippines,” he added.

The measure was approved by the Senate in February and by the House of the Representatives on June 3.

Before its sine die adjournment Friday, the House adopted the Senate version as amendment of its own version.

There will be no bicameral conference. The bill is just awaiting the signature of President Rodrigo Duterte. (With Marites Villamor-Ilano/SunStar Philippines)
< Previous PageNext Page >