Covid-19 cases in Davao Region spike in May 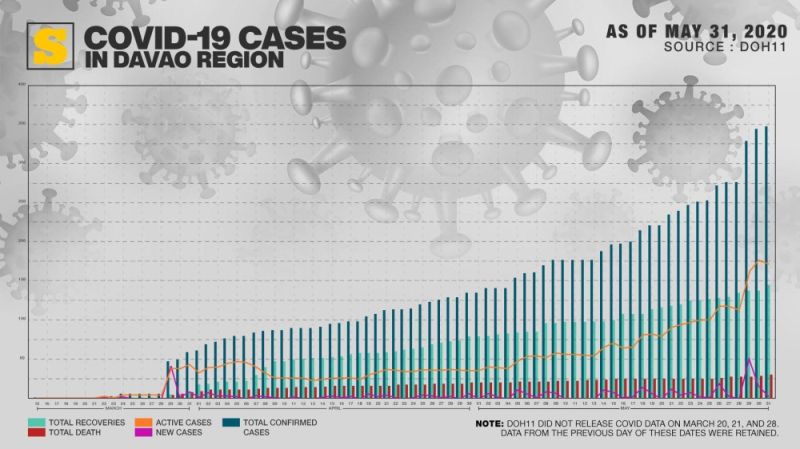 Towards the end of May, data from the Department of Health in Davao Region showed that there was a spike in the total number of confirmed cases in Davao Region. (Infographic by Ralph Lawrence G. Llemit)

THE Department of Health (DOH) in Davao Region recorded a spike in the total number of confirmed coronavirus disease 2019 cases towards the end of May.

Most new cases were recorded on May 26 with 20 cases and May 29 with 52 cases. May 29 also recorded the highest number of new Covid-19 cases in the Davao Region since the first case was recorded on March 15.

Data also showed that since the shift to general community quarantine (GCQ) on May 16 for most parts of the Davao Region, the total number of new cases from May 16 to May 31 is at 151.

The spike in new cases in May could be attributed to the following: Improved contact tracing efforts by the DOH and local government units; improved testing capacity; and the return of stranded passengers and overseas Filipino workers (OFWs).

In a statement on May 29, DOH-Davao said a total of 50 local contact tracing teams (LCTT) with 1,091 members have already been organized in the region.

In terms of testing capacity, the Southern Philippines Medical Center (SPMC) increased its testing capacity to 250 to 300 individuals a day from the previous 100 to 200 tests.

Towards the end of May, the Research Institute for Tropical Medicine (RITM) has given the go signal to Davao One World Diagnostic Center Inc. in Davao City and Davao Regional Medical Center (DRMC) in Tagum City, Davao del Norte to conduct Covid-19 tests in Davao Region.

Prior to the shift to GCQ, Davao City Mayor Sara Z. Duterte-Carpio has warned that there could be a spike in the total number of Covid-19 cases in the region.

Likewise, she also warned that the passengers brought home by the mercy flights may have been infected by the Sars-CoV-2, the virus causing Covid-19, during their stay at areas affected by the virus.

In terms of recoveries, there were a total of 66 recoveries in May. This is lower than the 72 recoveries recorded in April. Between March 15 to 31, there were only seven recoveries. May 11 recorded the highest number of new recoveries at 11.

New deaths recorded in May was at 10, lower than the 12 recorded deaths in April. From March 15 to 31, eight deaths were recorded.

In the coming months, Duterte-Carpio warned that there could be a surge of Covid-19 cases in Davao Region for June and July based on the observations and analysis of medical consultants.

"Ingon sa doctors sa ato is sa June and July let's expect a surge in cases because of general community quarantine and madelay ang tracing sa mga tao (The doctors told us to expect a surge in cases this June and July because of the GCQ and the delay in the tracing of people)," the mayor said in an interview via 87.5 FM Davao City Disaster Radio on June 1.