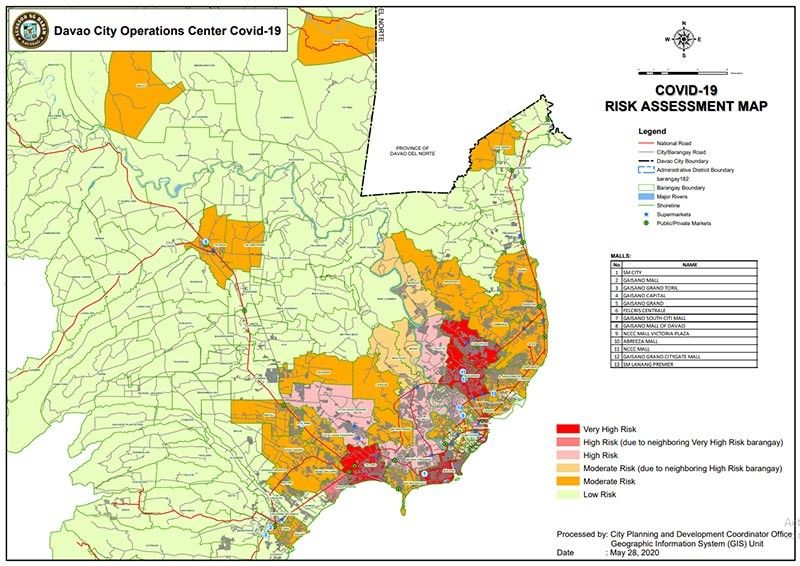 DAVAO City being placed under “very high risk” category is due to a significant number of cases of the coronavirus disease 2019 (Covid-19), which has now expanded to nine barangays, as of June 6.

Ma-a was added in the city's Covid-19 risk assessment map, which was last updated on May 26.

All other barangays not mentioned are automatically considered as low risk barangays.

The classification of barangays, according to an issued statement of the City Government, is identified following the lifting of the district clustering that strictly limits the travel from one cluster to another.

The lifting of the clustering system is implemented through Executive Order No. 33 (EO) placing the entire city under general community quarantine (GCQ), as recommended by the Inter-Agency Task Force on Emerging Infectious Diseases (IATF-EID).

However, the City Government advised the public to avoid unnecessary travel to areas identified to be very high risk, high risk and moderate risk based on the risk assessment made, including public markets (palengke), supermarkets, and all other establishments under these areas.

According to the Davao City Operations Center for Covid-19, a formula is used in the Covid-19 risk assessment map currently posted on the city government’s website.

As of press time, the City Government nor the Department of Health-Davao Region has not yet released a breakdown per barangay.RGL