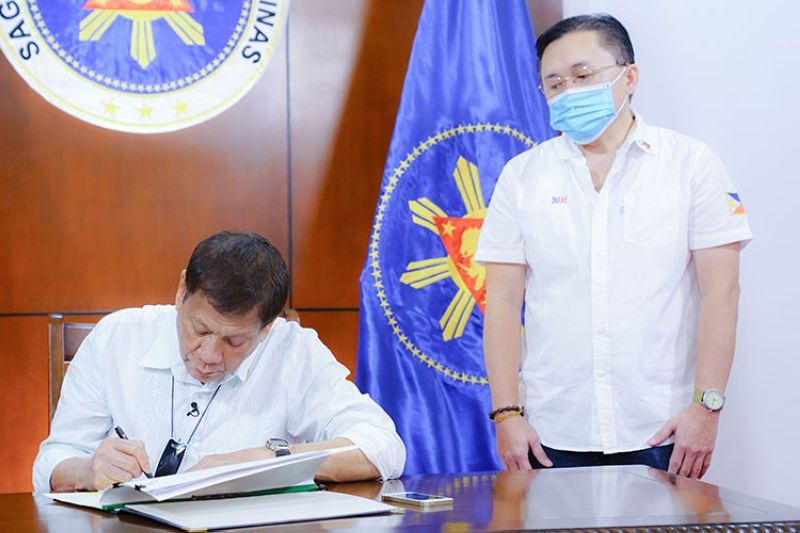 DAVAO. President Rodrigo Duterte signs into law the establishment of the National Academy of Sports during a ceremony at the Presidential Guest House in Panacan, Davao City on June 9, 2020. Also in the photo is Senator Christopher "Bong" Go. (Presidential photo)

STAKEHOLDERS lauded President Rodrigo Duterte's signing into law the Republic Act 11470, seeking to establish the National Academy of Sports, on June 9 in Davao City, amid the coronavirus pandemic that has crippled the world economy, including the sports industry.

The Philippine Sports Commission (PSC) Board, in a statement, thanked Duterte for the welcome move.

PSC Chairman William I. Ramirez, on behalf of the PSC Board, said, "We are elated to see the handiwork of our leaders in the Senate and Congress come to fruition with this law."

The national sports agency also committed to support and cooperate "in the implementation of RA 11470's provisions, recognizing its success as a vital boost to the country's sports development efforts in line with its mandate to develop grassroots and elite sports."

Marawi City-based International Physical Education (PE) expert Prof. Henry Daut, for his part, said, "The signing into law of Republic Act 11470 is a shot in the arm of Philippine sports. It is the much needed and long overdue medication to an ailing sports development in the country. This is a whiff of fresh air and great news for Filipinos who are the most sports fanatics in the world."

Daut, Senior Professor and former Dean of the College of Sports, PE and Recreation at the Mindanao State University, said the NAS is a clear pathway for talent identification and development that aims to sustain the gains of Philippine sports during its recent triumph at the 30th Southeast Asian Games that the country hosted last year.

"As a sport advocate, sport leader and sport missionary, I hope to see the implementation of the law to its fullest with consideration of ensuring that the leadership and management of the Academy will be placed in the hands of highly qualified and competent sport leaders. A clear delineation of functions between the Department of Education (for the educational aspect/curriculum) and PSC (for the coaching, training and sport development) should be in place," said Daut, also former Philippine Sports Institute director for grassroots sports.

Davao City Sports Development Division officer-in-charge Mikey Aportadera said, the NAS is "a first in the country and a platform for PH athletes to excel and to be at par with other countries in sports."

Meanwhile, Davao del Norte provincial sports coordinator Giovanni Gulanes said, "This is the most serious move to develop young champion athletes through science-based training. However, it should later set up satellite campuses in the provinces and other cities especially in the Vis-Min area, to entice more athletes to enrol without leaving their families for months."

In the IRR, Gulanes said the role of the PSC to provide technical and expert support must be identified and that only teachers with proper NSA-IF accreditation in their respective sports are allowed to teach.

"This would allow effective technology-transfer from expert coaches to teachers. Hence, teachers will not be limited to instruction but also to assume the roles of co-trainers," he added.

Mindanao Peace Games convenor Noli Ayo of the Ateneo de Davao University, said, "The law can only go as far as the people that will be tasked to oversee its implementation are capable of bringing it. I can best gauge my excitement if I see who will be assigned to run it."

Ayo also hopes and prays that the President will task young, inspiring and competent sports leaders, including current and former Olympians, to be actively involved in the teaching and mentoring of the gifted student-athletes who will be chosen to attend the NAS.

Senator Christopher "Bong" Go, chairman of the committee on sports, said in a statement, "I firmly believe that with this law, we will be able to catch up with the rest of the world in terms of sports development." He thanked his fellow legislators in both Congress and the Senate for coming together to support the measure. He also thanked the President for approving the law.