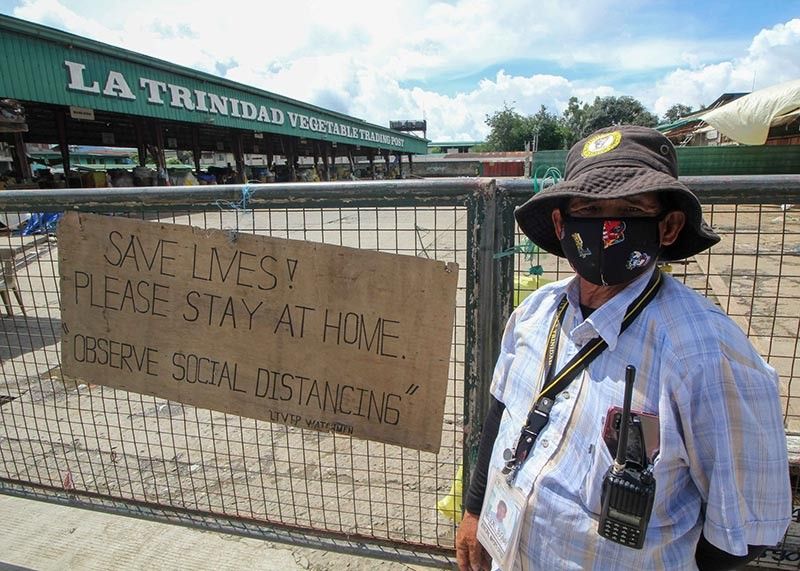 BAGUIO. A watchman guards the gates of the La Trinidad Vegetable Trading Post after a three-day lockdown was ordered Thursday, June 11 to Sunday, June 14. (Photo by Jean Nicole Cortes)

A SPIKE in coronavirus disease (Covid-19) cases was reported across the Cordillera Administration Region (CAR) over the weekend.

On June 13, 2020, two more persons tested positive for the virus in Baguio City.

The City Health Services Office said the first patient is a 43-year-old female hospital worker and a resident of Misereor Street, Barangay Bakakeng SLU SVP. However, she has been staying on Magnolia Street in QM.

The second patient is a 35-year-old male who resides in Barangay San Vicente. His permanent address is in Basista, Pangasinan.

In the province of Apayao, six confirmed cases were recorded on June 12 after its first patient recovered and was sent home four days earlier.

Governor Eleanor Bulut-Begtang appealed to all residents of the province to stay home and strictly observe social distancing and prescribed health protocols while maintaining calm and order.

“We reiterate our call for everyone to strictly stay at home while we undertake necessary actions to prevent the further transmission of the disease in the province,” the governor said.

Before noon on Friday, Begtang reported two new Covid-19 cases, both male residents of Pudtol and Santa Marcela aged 27 and 82, respectively. The patients are in stable condition.

On the same day, the Department of Health confirmed four more positive cases -- two from Luna town and two from Santa Marcela.

Begtang immediately ordered aggressive contact tracing in the province as the municipalities of Luna, Santa Marcela and Pudtol were placed under temporary lockdown.

“The Provincial Government, in cooperation with concerned national government agencies and municipal government units, is doing everything to prevent further transmission of the virus in our province of Apayao,” Begtang said.

As of June 13, Apayao logged a total of seven Covid-19 cases with six active cases and one recovery.

In Baguio City, Wilfredo Acosta, a taxi driver from Barangay Honeymoon-Holyghost is the 37th Covid-19 case.

He volunteered to join the coronavirus disease risk-based testing activity at the Baguio Convention Center on June 9 to comply with the requirements to go back to work.

He had no Covid-19 symptoms, no travel history outside the city and no known contacts with infections. He said he did not expect his reverse transcription-polymerase chain reaction test result would turn out positive.

He immediately agreed to disclose his identity to facilitate the tracing of his contacts, saying it is necessary to prevent the spread of the virus.

Acosta said he had three driving schedules dated May 28, June 7 and June 11.

The unit he was driving was equipped with all the required safety measures like a plastic barrier and disinfection kits.

The city's contact tracing team is now reaching out to Acosta's passengers.

Acosta has asked all the people he came in contact with to go to the nearest health center for monitoring and medical attention.

Across the region, three cases were confirmed in Benguet on Thursday, June 11, 2020: two cases in Kalinga and one each in the provinces of Abra and Ifugao.

The Department of Health (DOH)-CAR reported the seven new cases are all in stable condition.

In Benguet, La Trinidad Mayor Romeo Salda on Thursday ordered a three-day lockdown at the La Trinidad Vegetable Trading Post (LTVTP) for disinfection and contact tracing. The Municipal Health Office confirmed one of the positive cases had visited the vegetable depot.

“There arises the need to issue a three-day lockdown to effectively conduct further contact tracing and disinfection and to allow for time to study the new guidelines to counter the vulnerability of the LTVTP site to contagion,” the executive order added.

The LTVTP, an activity where traders, disposers, drivers and helpers meet, is unhampered even in areas where there are positive cases of Covid-19.

Earlier, the town confirmed another Covid–19 case involving a 28–year–old male from Little Kibungan who was reportedly in close contact with a vegetable truck helper who previously tested positive for the virus.

On the same day, confirmed cases were recorded in two other Benguet towns.

One is a 54–year-old Barangay Peacekeeping Action Team member from Barangay Dalupirip in Itogon and the other is a 30–year-old male from La Trinidad but is currently deployed in Buguias.

Benguet has a total of 17 positive cases with 10 individuals fully recovering from the disease.

DOH-Cordillera has already recorded 64 Covid-19 confirmed cases in the region with 18 active cases, 45 recoveries and one death as of press time. (With PR)