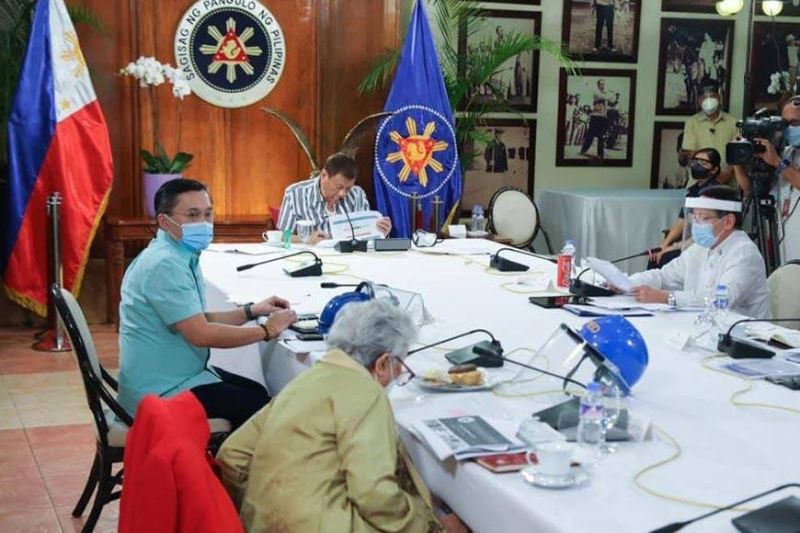 The two cities have also registered a consistent case doubling time of less than seven days and a significant increase in critical care utilization compared to critical care capacity, according to the Inter-Agency Task Force (IATF) for the Management of Emerging Infectious Diseases.

The IATF’s recommendations, which are contained in Resolution No. 46-A, were approved by President Rodrigo Duterte Monday night, June 15, 2020.

The President, however, said the new quarantine classifications could still be modified after he meets with the business community.

"'Yan na muna ang ano natin, but later on...tomorrow or day after, after I shall have talked to the businessmen, then we can decide whether or not we can still modify the modified lockdown that we have imposed," Duterte said at the start of the meeting which was broadcast on state television.

Aside from escalating quarantine restrictions in the cities of Cebu and Talisay, Duterte also approved the IATF recommendation to retain the general community quarantine (GCQ) in the entire Metro Manila.

Other areas that will remain under GCQ are:

The rest of the country will remain under modified GCQ until June 30.

Secretary Carlito Galvez Jr., chief implementer of the National Task Force Against Covid-19, reported to President Duterte that his team observed an increase in severe cases of Covid-19 in Cebu City.

The ventilators are among the 55 machines donated by San Miguel Corporation president and CEO Ramon Ang.

Galvez said that of the 15 areas with the highest cases of coronavirus infection in the country, 11 are in Cebu City.

Department of the Interior and Local Government (DILG) Secretary Eduardo Año, for his part, said he will send more policemen to Cebu City to ensure strict implementation of quarantine restrictions.

Under an ECQ, public transport systems will be suspended and everyone will be required to stay home except essential personnel and others authorized to go out of their residence. Only essential businesses will be allowed to open, mass gatherings will be prohibited and a curfew will be enforced.

Earlier, DOH officials reported a decreasing case fatality rate (CFR) in the country despite the rising number of infections. DOH Undersecretary Maria Rosario Vergeire said the country’s CFR went down to 4.24 percent on June 13 from 5.52 percent on May 31.

Of the 2,009 ventilators nationwide, only 22.45 percent were in use as of June 14. (Marites Villamor-Ilano/SunStar Philippines)
< Previous PageNext Page >