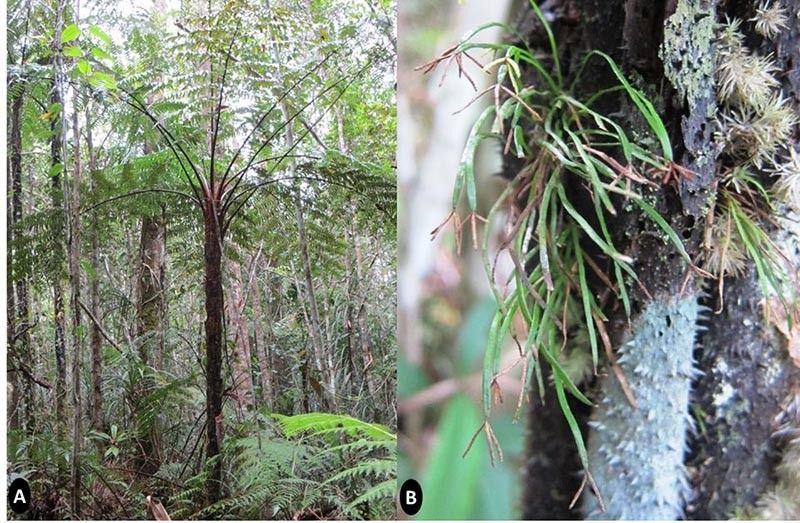 DAVAO. Actinostachys minuta is distinct from the other known Philippine species of grass ferns because of its diminutive epiphytic habit, as it grows on another tree and a habitat restricted to the trunks of the tree fern. (Photo by DENR-Davao)

THE flora in the Philippines is flourishing with the discovery of a new endemic plant species in Mt. Hamiguitan Wildlife Range Sanctuary (MHWRS), a protected area located in San Isidro, Davao Oriental.

On Monday, June 15, the Department of Environment and Natural Resources (DENR)-Davao announced that there is a newly discovered species called Actinostachys minuta, a diminutive grass fern. It is said to be distinct from all other species of Actinostachys or grass ferns.

It is also described to be short and narrow fronds, distinct triangular stipe, and bifid apex of the sorophore lamina with profuse white long hairs and sporophores 1-4 but usually 1.

"It seems like the ecologically-wealthy realm of Mt. Hamiguitan Wildlife Range Sanctuary (MHWRS) never ceases to offer site-endemic new species. It means that it can't be found anywhere else in the country, at least not just yet," DENR Davao said.

Mt. Hamiguitan is known to house the critically-endangered Philippine eagle, Philippine cockatoo, bonsai forests, and pitcher plants, among others.

In the research done by Victor B. Amoroso, Fulgent P. Coritico, and Peter W. Fritsch, this new species is distinct from the other known Philippine species of grass ferns because of its diminutive epiphytic habit as it grows on another tree and a habitat restricted to the trunks of the tree fern.

However, the researchers observed that despite that Mt. Hamiguitan declared as a protected area, these species occur within the buffer zone of San Isidro, MHRWS with an estimated number of 30 individuals growing strictly on trunks of tree ferns which threatens its number.

"Its location in the buffer zone and the over-collection of tree fern trunks as a medium to grow other plants and for the making of handicrafts will likely reduce the populations of the species if this threat continues," the research said.

Thus, they recommended these species to be classified as Critically Endangered to protect it based on its very small and restricted population with less than or equal to 50 mature individuals and the extent of occurrence estimated to be less than 10 kilometers.

With this discovery, DENR-Davao believed that more endemic species will be discovered in the protected area, thus, the need to strengthen the conservation and protection efforts for the mountain range.

"With its diverse and intact ecosystem, it is believed that MHWRS still hosts a long list of undescribed species that are yet to be discovered," DENR-Davao added.