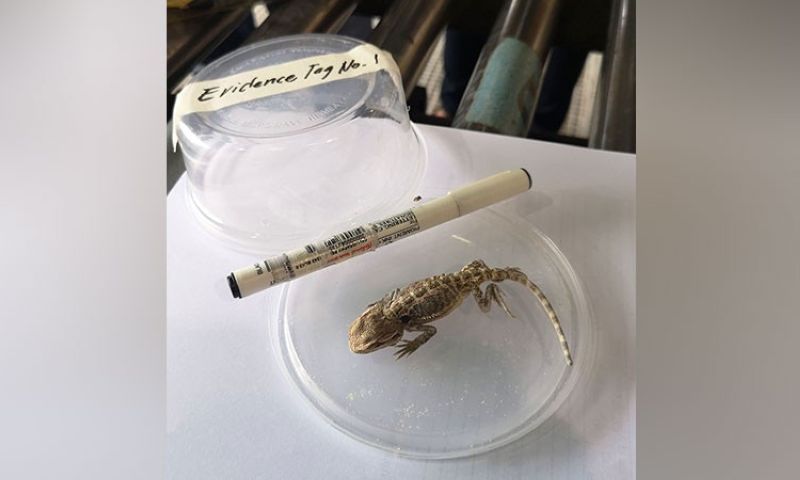 PAMPANGA. The bearded dragon seized by the DENR and Bureau of Customs discovered by a shipping company at Clark International Airport. (DENR)

CITY OF SAN FERNANDO -- The days of illegal wildlife trade conducted online are numbered, as the Department of Environment and Natural Resources (DENR) here warned the public against selling of wildlife through social media.

This came after operatives of the DENR and the Bureau of Customs (BOC) seized last week a juvenile bearded dragon estimated worth over P8,000, which was found and reported by a shipping company in the Clark International Airport in Pampanga.

According to the shipping manifest, the wildlife was sent from an online pet seller based overseas to the consignee who had no import permit on record.

Authorities have discovered upon opening of the shipped package that the bearded dragon had died during transport, which was shipped in a lidded plastic bowl without food, water or appropriate padding inside the container.

Paquito Moreno, executive director of DENR in Central Luzon, said transporting and trading of wildlife without necessary permit and proper documentation is prohibited under Republic Act 9147 or the Wildlife Resources Conservation and Protection Act of 2001.

"Our citizens should obtain proper permits and not disregard the regulatory processes required in importing wildlife," Moreno said.

He added that these laws are in place to protect the said wildlife and ensure its proper and safe transport, as well as to protect our nation's ecosystem.

Moreno also expressed his gratitude to the BOC and Clark International Airport for their vigilance and support against illegal wildlife trade.

"We have tightened our watch on wildlife trafficking even during the Covid-19 pandemic, especially in our airports and seaports in the region, since these are potential gateways for illegal wildlife trade," he said.

The DENR has placed Clark and Subic Freeport Zones under tight watch as their strategic locations make them irresistible to smugglers attempting to transport wildlife poached from other countries and parts of the Philippines such as Aurora and Palawan.

Intensified wildlife protection and conservation shows that the DENR has already seized a total of 311 species of reptiles, birds and mammals since 2015.

The Asian Development Bank pegs the illegal wildlife trade in the Philippines at P50 billion a year (roughly equivalent to $1 billion). This includes the market value of wildlife and its resources, their ecological role and value, damage to habitats incurred during poaching, and loss in potential ecotourism revenues.

According to study, bearded dragon, with scientific name Pagona vitticeps, is a type of ancient lizard and native from the deserts of central Australia, while the "bearded" refers to a flap of skin under the chin that they extend when disturbed and they generally grow up to 30 to 60 centimeters with life expectancy of 10 years. Pet enthusiasts are fond of keeping this reptile species because it is easy to maintain and has a wide variety of food diets, the study added.