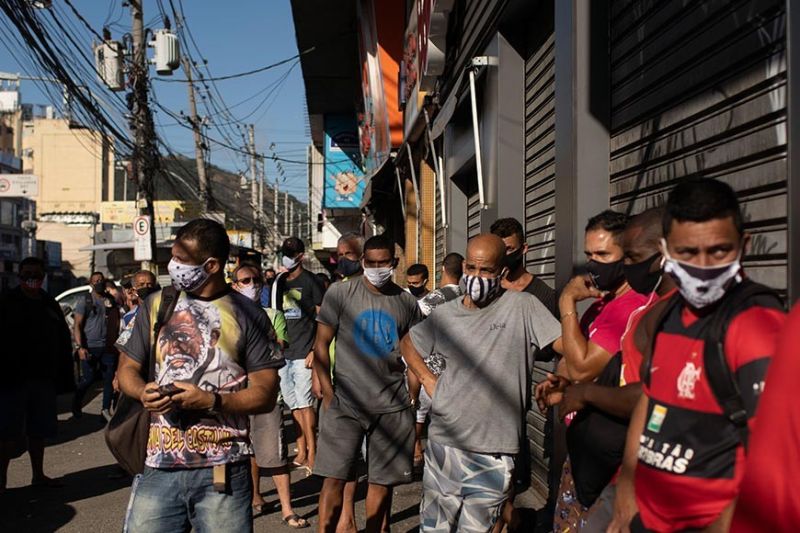 SAO PAULO — Brazil’s government confirmed on Friday, June 19, 2020, that the country has risen above 1 million confirmed coronavirus cases, second only to the United States.

The country’s health ministry said that the total now stood at 1,032,913, up more than 50,000 from Thursday, June 18, 2020. The ministry said the sharp increase was due to corrections of previous days’ underreported numbers.

Brazilian President Jair Bolsonaro still downplays the risks of the virus after nearly 50,000 deaths from Covid-19 in three months, saying the impact of social isolation measures on the economy could be worse than the disease itself.

Specialists believe the actual number of cases in Brazil could be up to seven times higher than the official statistic. Johns Hopkins University says Brazil is performing an average of 14 tests per 100,000 people each day, and health experts say that number is up to 20 times less than needed to track the virus.

Official data show a downward trend of the virus in Brazil’s north, including the hard-hit region of the Amazon, a plateau in cases and deaths in the countries’ biggest cities near the Atlantic coast, but a rising curve in the south.

In the Brazilian countryside, which is much less prepared to handle a crisis, the pandemic is clearly growing. Many smaller cities have weaker health care systems and basic sanitation that’s insufficient to prevent contagion.

“There is a lot of regional inequality in our public health system and a shortage of professionals in the interior,” said Miguel Lago, executive director of Brazil’s Institute for Health Policy Studies, which advises public health officials. “That creates many health care deserts, with people going long distances to get attention. When they leave the hospital, the virus can go with them.”

The cattle-producing state of Mato Grosso was barely touched by the virus when it hit the nation’s biggest cities in March. Sitting far from the coast, between the Bolivian border and Brazil’s capital of Brasilia, its 3.3 million residents led a mostly normal life until May. But now its people live under lockdown and meat producers have dozens of infected workers.

In Tangará da Serra, a city of 103,000 people in Mato Grosso, the mayor decided Friday to forbid the sale of alcoholic drinks for two weeks as an incentive for people to stay home. Fábio Junqueira said the measure was needed after a spike in Covid-19 cases that filled 80 percent of the city’s 54 intensive care beds. The city has had nearly 300 cases of the disease, plus three fatalities.

In Rondonópolis, only 300 miles away from Tangará da Serra and home to a thriving economy, health authorities closed the local meatpacking industry after 92 cases were confirmed there. The city of 144,000 inhabitants counted 21 deaths from the virus and more than 600 cases. The mayor has also decided to limit sales of alcoholic beverages.

Even regions once considered examples of successful efforts against the virus are now struggling.

Porto Alegre, home to about 1.4 million people, had success in slowing the virus' spread over the last three months. But now its mayor is considering increasing social isolation measures after ICU occupancy in the city jumped to 80 percent this month.

“We were already making projections for schools to come back,” Mayor Nelson Marchezan Jr. told The Associated Press. “Now the trend is to impose more restrictions.”

Outside Sao Paulo city, five regions of the state’s countryside will have to close shops starting Monday due to a rise in coronavirus cases. Governor João Doria announced the decision Friday.

Dr. Mike Ryan, the World Health Organization’s executive director, said at a news conference that Brazil needs to increase its efforts to stop the spread of infections.

“The epidemic is still quite severe in Brazil. I believe health workers are working extremely hard and under pressure to be able to deal with the number of cases that they see on a daily basis,” Ryan said. “Certainly the rise is not as exponential as it was previously, so there are some signs that the situation is stabilizing. But we’ve seen this before in other epidemics in other countries.”

Margareth Dalcolmo, a clinical researcher and professor of respiratory medicine at the state-funded Oswaldo Cruz Foundation in Rio de Janeiro, believes the reopening in major cities and the virus traveling by road into Brazil’s heartland will keep the pressure on the country’s health system.

“The risk in the interior now is very big,” she said. ”Our health system just can’t solve the most serious cases of Covid in many places of the countryside.” (AP)