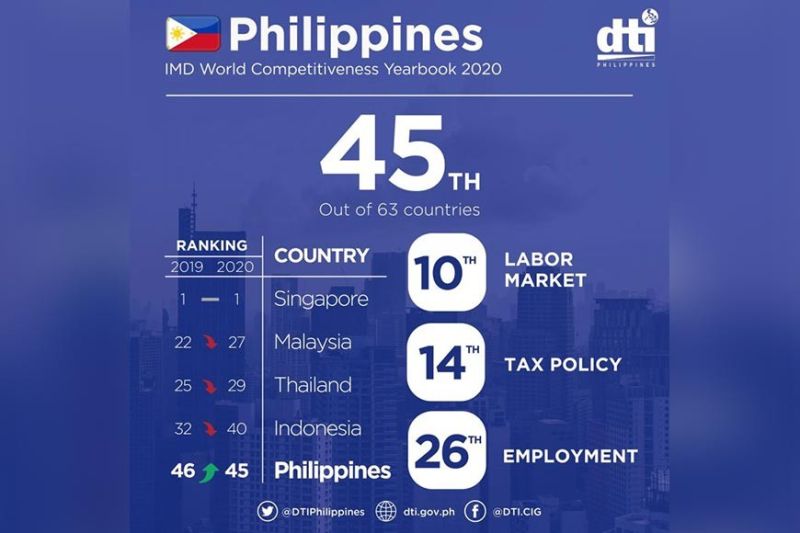 IMPROVEMENT. The graphic shows the ranking of the Philippines in the labor market, tax policy and employment indicators. The Philippines is the only one among the Southeast Asian countries, aside from Singapore, that improved its ranking year-on-year. (Photo from DTI website)

THE Philippines has kept its momentum with a slight upgrade from 46th to 45th spot in this year’s global competitiveness rankings by the International Institute for Management Development (IMD). The 2020 World Competitiveness Yearbook (WCY) by IMD also signaled an encouraging assessment of the country’s competitiveness, climbing from a dip in 2018.

The IMD ranking measures the capacity of a country to maintain an environment where enterprises can compete locally and internationally as it assumes wealth creation happens at the enterprise. The ranking was evaluated using the 2019 country measures and perception-based survey from business executives performed in the first quarter of 2020.

The Philippines is the only one among the Southeast Asian countries, aside from Singapore, that improved its ranking year-on-year.

In terms of growth, the Philippines is consistently among the top performers in the region with an average growth of 6.6 percent from 2012 to 2019 and posting six percent in 2019, while Malaysia registered 4.3 percent, Thailand 2.4 percent and Indonesia five percent.

With this announcement, Trade Secretary Ramon Lopez pointed out that: “The Philippines stands on solid ground and has the momentum to overcome the current crisis.”

These are aligned with the perception survey that showed the country’s skilled workforce, economic dynamism, open and positive attitude of management, high educational level of the workers and cost competitiveness are still the top five key factors that make the Philippine economy attractive to investors.

Moreover, successful reforms in the improvement of labor market conditions through the active implementation of small and medium enterprises (SME) promotion and heightened government support for technical-vocational education and training, among others, enabled the Philippines to retain its 10th place position in the Labor Market indicator, the highest sub-factor for the country.

The trade chief assured that despite the socioeconomic difficulties arising from the Covid-19 crisis, the Philippines demonstrates resilience, flexibility and adaptability for both the public and private sectors as they face the challenges head-on. (PR)