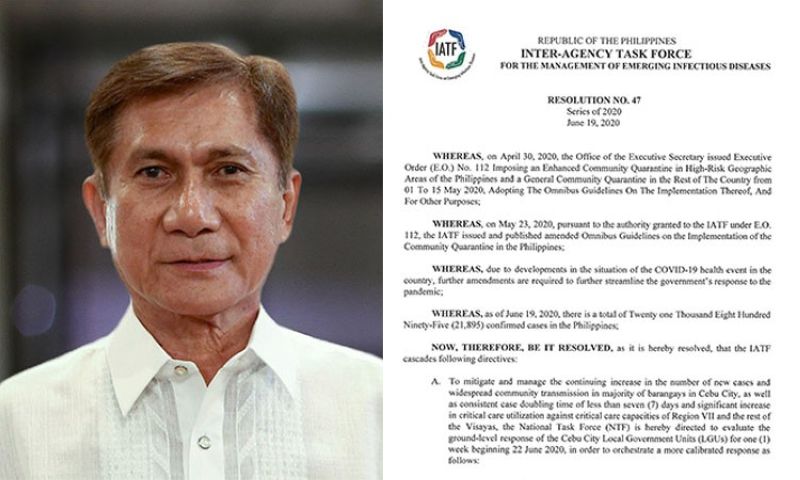 In a June 19 resolution, the Inter-Agency Task Force for Management of Emerging Infectious Diseases (AITF-MEID) ordered for evaluation of the city's response to the coronavirus pandemic.

As if to complete a one-two-three strike at Cebu City, President Rodrigo Duterte announced Monday, June 22, the designation of Environment Secretary Roy Cimatu as the president's and IATF's representative in Cebu. Cimatu is a retired Army general who was chief-of-staff of the Armed Forces of the Philippines under then President Gloria Arroyo. He succeeded Gina Lopez as DENR secretary. He will be 74 this July 4.

News of Cimatu's designation has set off a spate of speculations, which range from the justified to the baseless, including these: the former military general would take over the local anti-Covid-19 operations, thus relieving or marginalizing Mayor Edgardo Labella and perhaps other local government unit chief executives, and revamping operations and even strategies.

CIMATU'S TITLE AND JOB. Cimatu could be the IATF deputy implementer for the whole of Visayas, a position that, together with a National Task Force (NTF), was still being studied as of June 20.

[1] To "evaluate ground-level response" in Cebu City and the Visayas in order to have "a better calibrated response" during a period of one week, from June 22 to 28;

[2] To assess "the possibility" of setting up and NTF Emergency Operation Center and a deputy implementer for the Visayas region.

[3] "Harmonization" of data from the regional and national IATF, which are provided by DOH, DILG and NTF; and

JUST EVALUATION, ASSESSMENT. Assume that Cimatu will recommend anti-Covid-19 measures, including the operation center and the position of deputy implementer. The President may keep Cimatu for the post or name someone else.

It may be noted that the former general's job in writing is merely "evaluation" and "assessment." No mention of "take-over" of local operations or "revamp" of existing strategies.

Besides, Cimatu reports to IATF and the President, that ultimately decide what to do.

HOW ABOUT HIS MARCHING ORDER? What President Duterte told the nation last June 22 that Cimatu would do may be considered his "marching order." That plus the additional instruction he will publicly and privately give later to Cimatu.

The order publicized in on national telecast includes:

[1] "There are things not done, and these things must be done." They obviously include the enforcement of quarantine guidelines.

[2] "Exercise the powers of the task force." The President may be more specific in a written order he will give through Executive Secretary Salvador Medialddea.

[3] Cimatu will be assisted by DOH and DILG and he "has the liberty to ask the military guys to enforce the lockdown."

MILITARY ROLE IN ENFORCEMENT. What may seem disturbing is the matter of getting the help of the military in implementing the quarantine. That no longer falls within the meaning of "evaluation and assessment" under Cimatu's job.

The President though strictly gives only "the liberty to ask," leaving to armed forces officials to decide if the request is within their authority to grant, especially that in Cebu City there is still no ordinance punishing quarantine violations and the Bayanihan to Heal as One Act already lapsed with the adjournment of Congress last June 5 or would lapse with the end to emergency powers on June 25, whichever theory is correct.