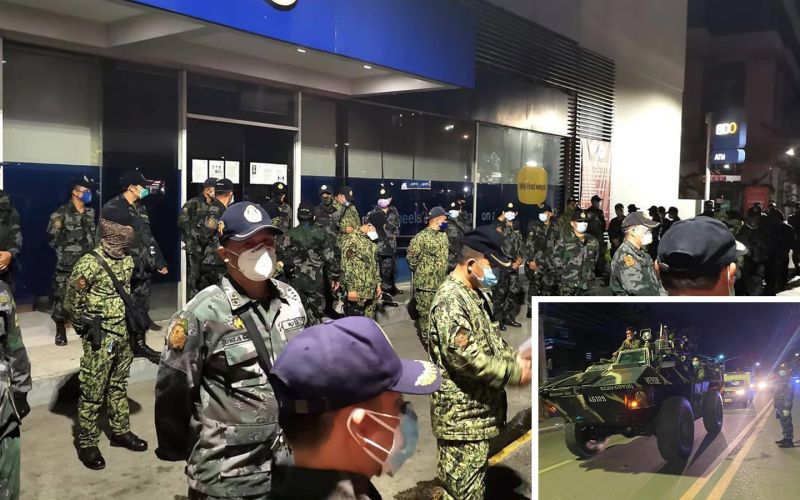 CURFEW. The Task Force Cebu and members of the Cebu City Police Office enforce the curfew in Cebu City on Tuesday night, June 23, 2020. They will be manning the checkpoints every night from hereon. A briefing was conducted on their tasks at the Fuente Osmeña rotunda. Inset, an armored personnel carrier is among the vehicles they used to make patrols on Cebu City streets. Hours earlier, retired general Roy Cimatu, tasked by President Rodrigo Duterte Monday night to oversee the Covid-19 response in Cebu City, had arrived in Cebu and met with local leaders to discuss the Covid-19 crisis in the city. (Roger Vallena (main photo), Benjie Talic (INSET))

The order to cancel Cebu City’s quarantine passes was given by Department of the Interior and Local Government (DILG) Secretary Eduardo Año.

Año was among those who accompanied Cimatu to Cebu all the way from the nation’s capital.

“We have been directed by DILG to cancel all quarantine passes issued to Cebu City residents. This drastic measure was put in place after an Inter-Agency Task Force team went around the city earlier today and still found many people out of their homes,” Labella said in a late night statement.

“I ask for your calm and understanding as we work out the details in coordination with the DILG and national agencies,” Labella said.

“We will work to ease this transition as part of efforts to contain the spread of Covid-19. There will be difficult days ahead, but let’s keep our eyes on our common goal, which is to save our community from this pandemic,” Labella added.

Ferro said new quarantine passes will be issued; this time, strictly adhering to the one-person-per-family rule on who will be allowed to go out to buy essential goods and medicines.

He clarified that frontliners, members of the media, call center agents, those involved in food deliveries and other essential and exempted individuals will still be allowed to go out.

Ferro will meet with Labella on Wednesday and Thursday to discuss mechanics on the re-distribution of the new quarantine passes for the rest of Cebu City.

They will also discuss plans to schedule the different barangays’ turn for their residents to go to grocery stores, Ferro said.

"We will schedule it so that only a few people will go out,” Ferro explained.

If grocery stores are available in their barangay, residents will be limited to those stores using passes that will be issued by the barangay, said Ferro.

He said the hard lockdown would only be lifted once Cebu City’s enhanced community quarantine (ECQ) status is downgraded.

Police station commanders were directed to prepare holding areas like gymnasiums for violators of the quarantine regulations.

Commanders were also ordered to strengthen security in barangay control points under their jurisdiction and deploy more personnel.

Police are to submit a report on uncooperative barangay officials within their respective areas of responsibility.

Meanwhile, Cebu Gov. Gwendolyn Garcia is giving people from the province who are working in Cebu City, 48 hours to choose whether to stay in the city or go back to their hometowns.

"That is a choice we will be giving you, because we will revert to Executive Order No. 17. This is to protect the province," Garcia said.

Order no. 17 sets the guidelines for the implementation of the general community quarantine (GCQ) in Cebu Province.

The governor also announced that border control checkpoints in the Province will again be strengthened beginning Friday, June 26.

Secretary Cimatu, along with members of the national Inter-Agency Task Force for the Management of Emerging Infectious Diseases (IATF-MEID), was in Cebu City Tuesday, to personally check on the situation in Cebu, the country’s epicenter of the Covid-19 pandemic.

The retired general and current head of the Department of Environment and Natural Resources said while it is still premature for him to make pronouncements on what he plans to do in Cebu, he said he will go down to the barangays to find out the totality of the problem.

Cimatu, who formerly served as Armed Forces of the Philippines Chief of Staff in 2002, denied speculations he will deploy military and police personnel in the streets to implement strict quarantine protocols.

Cimatu said he believes not all Cebuanos are quarantine violators and the people will eventually understand the government's move to protect them from being infected with the virus.

Cimatu also said there is a need to reinforce Cebu hospitals’ bed capacities and to replenish the number of doctors, nurses and health workers.

Though he has yet to receive a formal order, Cimatu arrived in Cebu City Tuesday morning, June 23, 2020, after he was verbally appointed by President Duterte Monday night, June 22, to oversee the Covid-19 situation in Central Visayas, specifically, Cebu City following the “sudden increase” of its Covid-19 cases.

Duterte said Cimatu has "the liberty to ask the military guys to enforce the lockdown."

Meanwhile, Año said there will be no additional tranche of Social Amelioration Program cash aid other than the first two batches intended for April and May.

However, if Cebu City will still be placed under ECQ after June 30, Año said the government will provide food packs and other forms of assistance through the local government units and the Department of Social Welfare and Development. (WBS, AYB, ANV / MVG)