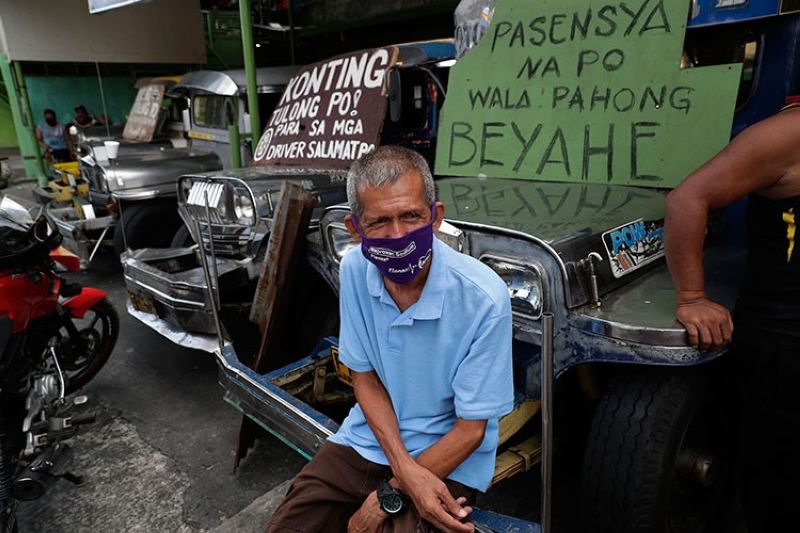 MANILA. Driver Arthur Vinluan, 62, sits on a passenger jeepney beside a sign that says "sorry we're not yet in operation" at the Tandang Sora terminal, which have been home for them since a lockdown started three months ago on Wednesday, June 17, 2020, in Quezon City, Philippines. (AP) 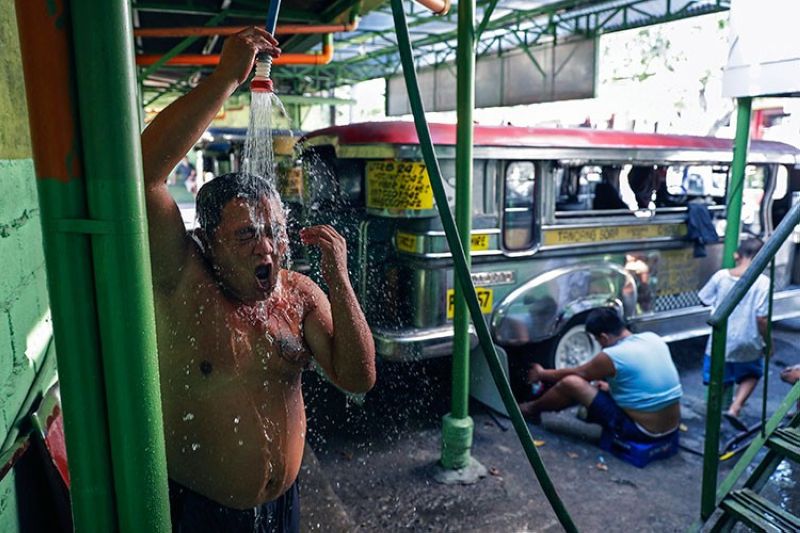 MANILA. Jeepney driver Jude Recio takes a shower at the Tandang Sora terminal, which have been home for them since a lockdown started three months ago, on Wednesday, June 17, 2020, in Quezon City, Philippines. (AP)

MANILA -- The Philippines’ iconic passenger jeepney was one of the first casualties of the country’s coronavirus outbreak, with the government imposing a tight lockdown that sidelined Manila’s “king of the road” and its thousands of poor drivers.

The restrictions imposed three months ago barred most public transport, forcing the gaudily decorated jeepneys off the road.

Many of the jobless drivers have resorted to begging in the streets, displaying cardboard signs bearing pleas for money and food on their jeepneys. “A little help please for us drivers,” one sign said.

In a once-bustling passenger terminal in Quezon City’s Tandang Sora village, about 35 drivers have turned their jeepneys into tiny shelters. They squeezed in cooking stoves, a few spare clothes, cellphone chargers and electric fans to fight off the tropical heat and mosquitoes in the cramped passenger compartment where they have now lived and slept for months.

“We have no income now. We have nothing to spend for our children,” said Jude Recio, a distraught driver with three children. “I hope we’ll be allowed to drive again.”

Well before the outbreak began, jeepneys had already been threatened by a government program to modernize public transport and phase out aging vehicles. The diesel-powered jeepneys that are popular among the working class cough out dark fumes which have been blamed for Manila’s notoriously polluted air.

The jeepneys evolved from US military jeeps that American forces left behind after World War II. The vehicles were modified and then were reproduced, many based on a second-hand truck chassis, and for decades were the most popular form of land transport and a showcase of Philippine culture on wheels.

The modernization program aims to make over jeepneys by improving their engines, safety and convenience. Many have electric engines and are called “e-jeeps.” They are bigger, safer and more environmentally friendly, but no longer are a head-turning icon.

The government eased the lockdown this month to reopen the slumping economy, allowing newer passenger vehicles to return to the road under strict quarantine regulations. But the traditional jeepneys remain sidelined.

The drivers in the Tandang Sora terminal have started sprucing up their jeepneys, hoping they can roll back onto the streets soon. But they fear that even if they and their jeepneys survive the pandemic, the government’s modernization program will still bring them to extinction.

“The government should study this program very well because we cannot afford the new jeeps. A lot of people will lose their jobs,” Recio said. (AP)