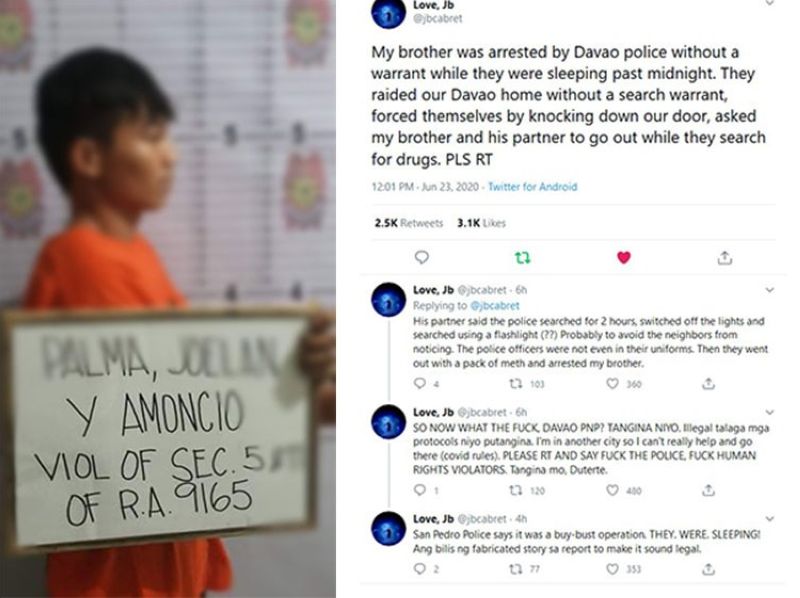 A TWITTER post of a family member of an alleged drug suspect circulated online accusing the Davao City Police Office (DCPO) personnel on allegedly planting evidence and looting during a raid in Barangay 76-A, Davao City.

In a post by a Twitter user @jbcabret, whose real name is JB Palma, he said his brother named Joelan Palma was illegally arrested by personnel of the San Pedro Police Station inside his residence on June 23.

"My brother was arrested by Davao police without a warrant while they were sleeping past midnight. They raided our Davao home without a search warrant, forced themselves by knocking down our door, asked my brother and his partner to go out while they searched for drugs. PLS RT," his post read.

His post, which is now making rounds in social media, added that the partner of his brother said that policemen searched their house for two hours. He also questioned why the police switched off the lights and searched using a flashlight.

"Probably to avoid the neighbors from noticing. The police officers were not even in their uniforms. Then they went out with a pack of meth and arrested my brother," the post added.

Based on the report of the police, Palma, 21, a pedicab driver, was arrested during a buy-bust operation after he transacted with an operative who posed as a buyer at 2:05 a.m. in Purok 17, Bilusa, Barangay 76-A, Davao City.

In the report, Palma allegedly sold illegal drugs worth P9,000. After the operative declared his authority, the suspect was arrested. Also recovered from the suspect's possession are P164,500 worth of illegal drugs.

However, JB denied the allegation, saying his brother and his pregnant partner were sleeping at that time and there's no way it could be a buy-bust operation.

"According to my sister, the officers sounded arrogant and proud. Na-meet na ba nila ang quota for the month? May bonus na ba? Not to mention they also stole non-drug-related items and cash," he said.

JB Palma told SunStar Davao that his brother was previously sent to a rehabilitation/juvenile prison in 2014 because he was a second-hand smoker of marijuana when the police caught his friends.

"For years, he was rehabilitated and I'm sure that the facility has always had success in rehabilitating children in conflict with the law knowing that Davao is so proud of it," he said.

The last communication they had was when he asked him about his job as a company driver. His brother could also not afford to deal with drugs since he has a pregnant partner and is financially challenged. He doesn't have the capital to engage in the illegal drug trade.

"As his brother in a distant city, I can't really provide any evidence that he was not involved in illegal drug-related activities except for my knowledge about his sweetness and innocence because he is still young," he said.

He added: "He's 21. He is known by our family as 'sip bata.' The only link that we might have to this issue was that my cousin who lives in the neighboring house was arrested for illegal drugs. He was a drug user. He was jailed for years. Knowing that my cousin suffered in jail, I don't think my brother would do the same thing especially now that he has a family of his own."

He said they already coordinated with the Commission on Human Rights (CHR), which will investigate the incident.

"Regardless, I don't think the police had the right to forcefully enter our house, point guns at them, and threaten them. They did not present any papers or documents such as arrest and search warrant. They did not cite the Miranda warning during the arrest," Jb Palma added.

Meanwhile, DCPO Director Police Colonel Kirby John Kraft did not directly comment on the incident but he said that all their drug operations are legal, thus denying the allegations against his policemen.

Kraft challenged the family member to file a case should they find irregularities during the conduct of the anti-drug operation.

"All drug cases have been properly documented and filed in court. Anyway if they have a complaint they can counter file against our policemen," Kraft said.