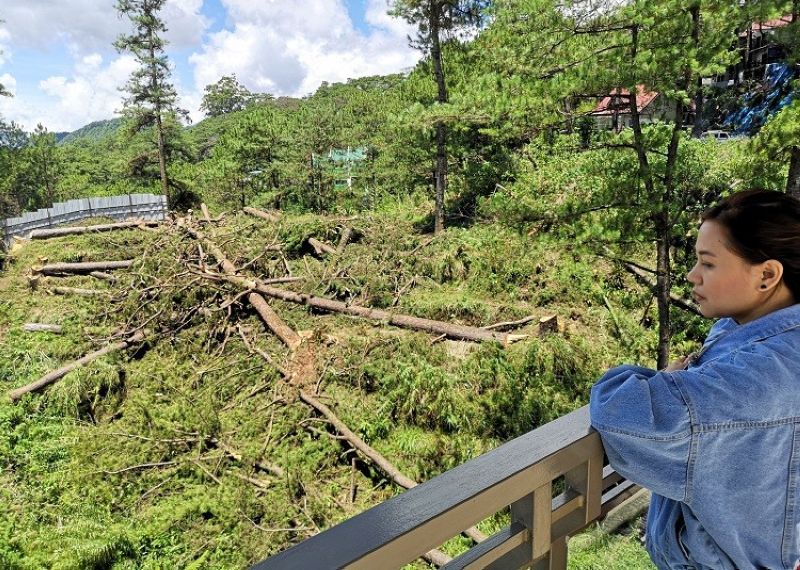 FELLED. A resident gazes at the fallen pine trees at Outlook Drive Barangay. The land developer was able to acquire tree cutting permits from the DENR Central Office. (Photo by Dave Leprozo Jr.)

FIFTY-four fully grown trees are set to fall at a private lot in Outlook Drive.

Amid a pandemic, a Special Private Land Timber Permit was granted to Vista Residences Incorporated allowing the cutting of 53 Benguet Pine and a Norfolk Island Pine.

The permit was signed by Jim Sampulina, Department of Environment and Natural Resources (DENR) undersecretary for field operations and Muslim affairs, and it was issued May 4 in Quezon City.

Ralph Pablo, DENR regional executive director, said Vista Residences went through the process of applying for a permit since 2018 at the central office. The trees to be cut were naturally grown, following department orders mandating these to be facilitated by the central office.

DENR-CAR records show the property owner applied for a special private land timber permit in 2018, went through the lengthy process, and complied with all the requirements including the Environmental Clearance Certificate (ECC), barangay certificate and mayor's clearance, which can only be issued after ample investigations and public consultations.

Records further showed that the company was required to redesign the original plan to reduce the number of trees to be affected.

DENR ordered Vista Residences to replace each tree cut with 100 seedlings totaling 5,400 of Benguet Pine species in compliance with an issued department Memorandum Order No. 2012 -02 November 5, 2012, specifying uniform replacement for cut and relocated trees to be turned over to the local DENR office concerned in support of the National Greening Program (NGP) and climate change initiatives of the government.

Pablo said in a meeting on Thursday afternoon with Baguio Mayor Benjamin Magalong, Vista Residence doubled the seedling count to 10,800.

Vista Residences is set to construct and develop a project at Purok 3, Outlook Drive. The company is a registered corporation of the Philippines with an office address at the Upper Ground Floor, Worldwide Corporation Center, Shaw Boulevard, Mandaluyong, Metro Manila.

On Wednesday, when news of the tree cutting hit social media, online petitions by Ben Galaboc, Jillian Adawey and Michael Bengwayan surfaced to stop Vista Residences and ask Magalong to save the trees.

Galaboc and Adawey asked the public to spread word and support for the petition “as quickly as possible for they've decided that it only takes days to cut these trees that took years-long to grow. Let's save the trees and save Baguio against commercialization!”

“The trees supply oxygen needs of at least 216 people, sequester more than 10 tons of carbon dioxide, help reduce global warming, recharge brooks and springs, help prevent water run-off and act a buffer zone against strong typhoons and winds. The importance of the trees is priceless,” the petition added.

In a statement, Magalong expressed displeasure over the cutting of trees in Outlook Drive.

"We are saddened because we feel it is a big blow to our Regreening Master Plan amidst our request to the Office of the President for a tree-cutting moratorium," the mayor said.

At the start of his term, Magalong assured the clamor for a building moratorium have been heard by President Rodrigo Duterte and batted for a tree cutting moratorium as well.

At that time, Magalong said a ban on construction will cover commercial and not residential buildings.

"While the proposed moratorium has been taken over by this health crisis, we need to follow this up to ensure that our remaining trees will be preserved," Magalong said. (With a report from Aileen Refuerzo/Baguio City Public Information Office)