12 recover from Covid in Benguet 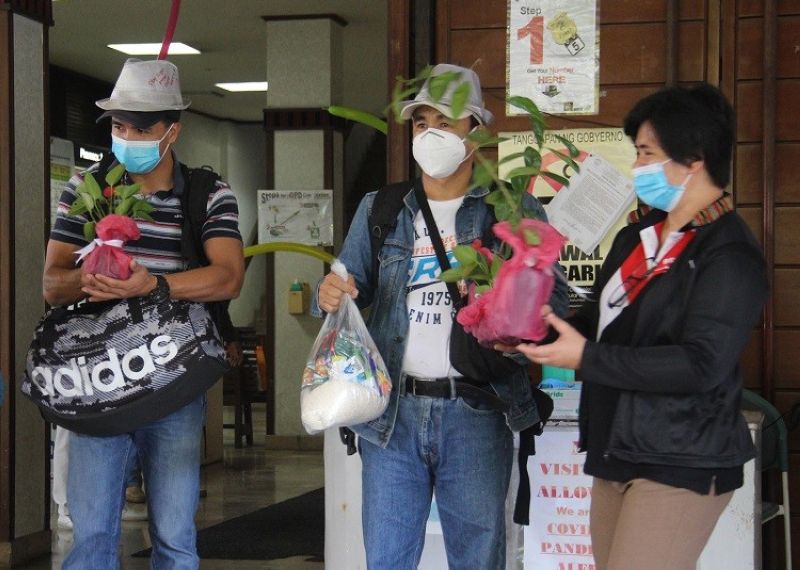 RECOVERED. Two of the 11 patients from Benguet mostly composed of frontliners were discharged Thursday afternoon at the Benguet General Hospital in La Trinidad. (Photo by Lauren Alimondo)

A simple send-off was held at the Benguet General Hospital (BeGH) together with medical frontliners and Benguet Officials headed by Governor Melchor Diclas, who congratulated the 11 patients for their recovery.

Plants and Fruit-bearing trees like guyabano, mango, and jackfruit with relief packs from Benguet’s Congressional District were distributed to the 11 patients after completing 14-day quarantine.

After Galino’s battle with Covid-19, Mankayan Mayor Frenzel Ayong assured her of permanent work in the local government unit.

Also going back home is a barangay nutrition scholar and a barangay tanod from the mining town of Itogon, a Philippine National Police personnel from La Trinidad, and a Bureau of Fire Protection and PNP personnel from Bokod.

Alexander Orogo, a driver from Sablan, the first confirmed case in the town previously agreed to reveal his identity to aid the facilitation of the contact tracing process, was also released.

Another vegetable truck driver from Tuba was also discharged. He stayed in the hospital for 18 days.

Diclas added there are now 36 confirmed cases of Covid-19 in the province with 22 recoveries as of Thursday.

Diclas said the frontliners were advised to still follow health protocols and isolate in the next 14 days.

Following the send-off, BeGH chief Dr. Meliarazon Dulay said there are still 11 patients being cured for Covid-19, while three others are in Baguio City.

"They are positive but they are asymptomatic. We are isolating them to prevent the spread of the infection," said Dulay.

Meanwhile, the Bureau of Correction (BuCor) officer from Itogon, who also tested positive for Covid, was released Friday afternoon, according to BeGH officials.

The BuCor officer had the longest stay in the hospital after he was confined for 26 days.

Aside from attending to medical needs, the patients were also referred to psychologists in a bid to take care of mental needs.