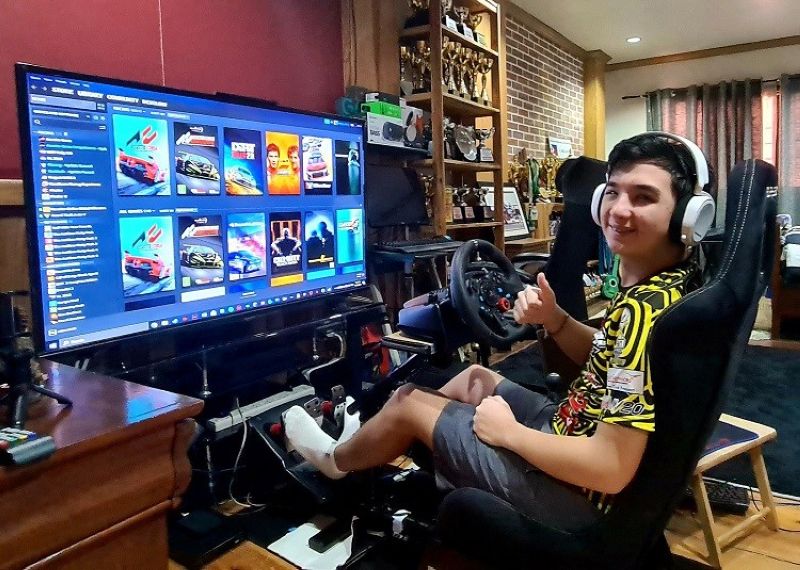 FIFTEEN-year-old racing phenom Iñigo Anton wasted no time adjusting to the "new normal" when the Covid-19 lockdown hit his hometown of Baguio City.

The multiple Philippine national champion car racer immersed himself almost immediately into the virtual world of simulator racing after a good friend asked him to join the “virtual car race” of Tuason Racing and Phoenix Pulse dubbed as "The Race for Frontliners (TRF)."

The race was also in line with the Phoenix’s Young Drivers Program (YDP) for aspiring new racers.

It was a race for a cause for frontliners and the grand winner of the race event is supposed to compete in Europe for the FIA Motorsport Games in October.

The event was able to raise over P400,000 used to provide meals to several frontliners such as the Philippine National Police, Philippine Coast Guard, Armed Forces and others.

After signing up for the race, Iñigo adapted to a daily regimen which consisted of putting in hundreds of laps on the simulator to get accustomed to the different race cars and tracks.

“Racing on the simulator is very close to racing real cars. It is very competitive and just like in the real world, the ones who put in the time will get better results. I knew it would be an uphill battle since there are so many good sim racers out there so I really practiced a lot,” said the 15-year-old.

After four weeks of qualifying, the top 26 sim racers battled it out for supremacy and Iñigo emerged at the top of the podium with Russel Cabrera and Corban Guerrero finishing second and third.

However, due to travel restrictions, Iñigo will not be able to race in Europe so the organizers instead gave him a fully decked out Racing Rig and other prizes worth P150,000.

“It was so nice being part of a meaningful event that extended help to our frontliners and I can’t believe that I won! Everyone was so quick and competitive. This experience really made me better racer,” Iñigo said.

Iñigo also participated in ex-Formula 1 driver Alex Yoong’s ERacing Grand Prix Philippine Edition Series where he was thrown straight into the deep end of the pool with the country’s top sim and real-world racers.

Anton finished second overall in the championship after dicing it out with the country’s best Sim racers like Luis Moren who finished first, and Alex Clapano who came in third.

Mike Potenciano, who runs the “Rally of Champions” series in the Philippines, quickly joined the bandwagon and held a “Virtual Rally of Champions” comprised of four grueling weeks of rally stages with all the top Sim Rally and some real-world rally drivers in the country participating. Iñigo again won the championship and took his first title on dirt in the virtual world of racing.

Iñigo is considered as one of the country’s up and coming real-world racers and has already won 10 national championships in different race formats.

He is the reigning Philippine Autocross Champion and was leading the Race of Champions series before the pandemic. Besides being a multi-awarded racer, Iñigo is also a constant academic gold medalist and finished this school year with top honors.