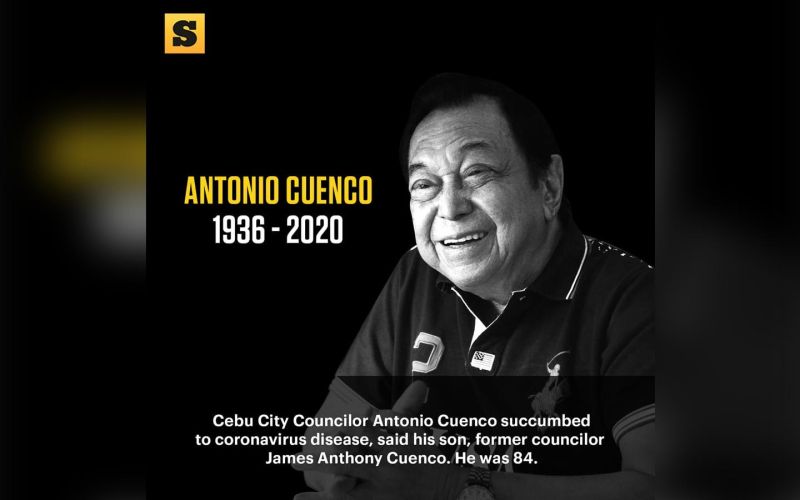 CEBUANOS know Antonio Cuenco as a councilor elected last year for a seat in the Cebu City Council.

But perhaps unknown to many, Cuenco fought for democracy and was at the forefront of the battle against illegal drugs.

Cuenco was one of the leaders of Cebu’s struggle against the dictatorship of Ferdinand Marcos and the one who personally made sure of the safety of Corazon “Cory” Aquino in Cebu on Feb. 22, 1986, at the start of the Edsa “People Power” Revolution.

Cory Aquino, widow of opposition leader Benigno “Ninoy” Aquino Jr., was in Cebu to call for civil disobedience during a rally of the Panaghiusa, the local opposition alliance in the 1980s against the Marcos dictatorship.

According to news accounts, Cuenco drove Cory Aquino to the Carmelite Monastery in Barangay Mabolo, Cebu City, to seek refuge there after Marcos issued a shoot-to-kill order on her. It was one act of Cuenco among the many he has done to contribute to the fight to restore democracy in the country. He led rallies, spoke in demonstrations in his booming radio announcer’s voice and faced anti-riot police armed with truncheons, guns, tear gas and water cannons.

Januar Yap wrote in an article in the SunStar Cebu issue of Aug. 21, 2012 that Cuenco “cried like a child” at the Manila airport when Ninoy Aquino was assassinated. “That was the saddest day of my life. I cried like a child at the (airport) holding room,” Cuenco said of the events of Aug. 21, 1983.

Cuenco was elected to the House of Representatives for several terms, where one highlight of his legislative stretch was as principal author of Republic Act 9165 or the Comprehensive Dangerous Drugs Act of 2002.

As chairman of the House committee on dangerous drugs in 2001, Cuenco initiated an investigation in aid of legislation into drug trafficking in the Philippines. Part of the inquiry looked into the identities of suspected drug lords in Cebu.

Cuenco was Cebu City councilor, a leader in the struggle for democracy, an “enemy” of those in the illegal drug trade and more.