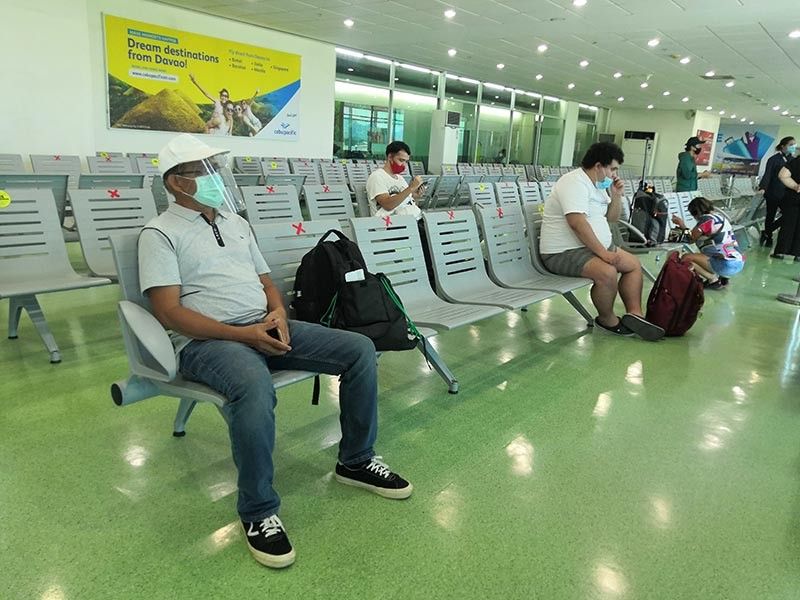 TRAVEL ON HOLD. With travel restrictions to and from Davao City, the tourism industry is expected to weaken amid the pandemic. (Photo by Ace Perez) 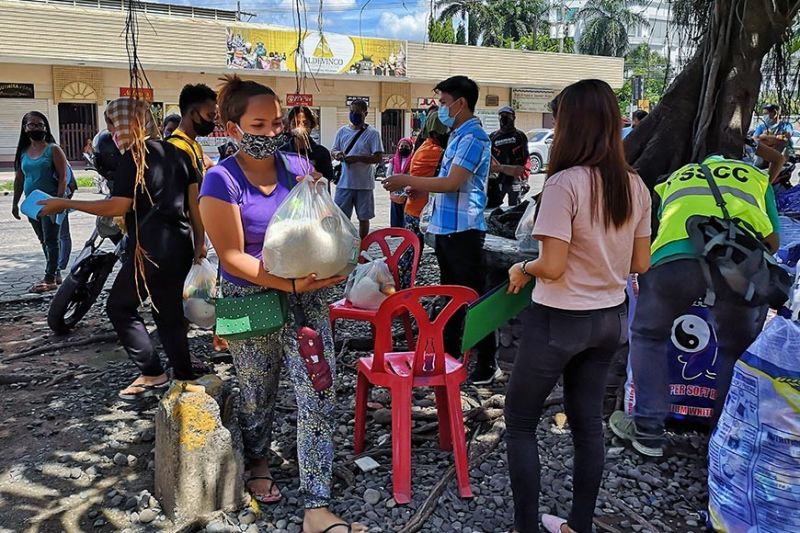 RATIONS. Vendors of the Roxas Night Market and other individuals affected by the Covid-19 pandemic received rationed goods from the city government. The city assured that those who are working in businesses that have not yet been allowed to resume operations will receive rationed goods. (Photo by Macky Lim) 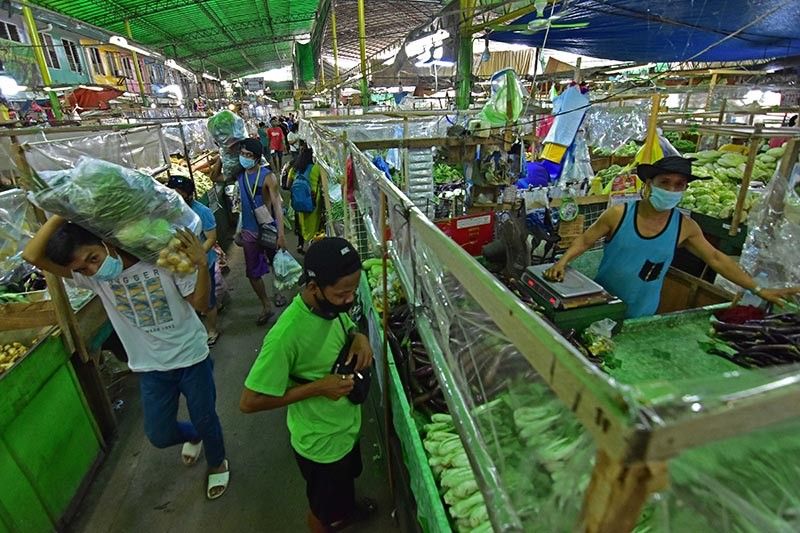 BARRIERS. Stalls at the Farmers Market, Brgy 2-A now have transparent barriers as one of the preventive measures imposed by the government. (Photo by Macky Lim)

WHEN some of the local government units in Davao Region decided to declare community quarantine sometime March 2020, many establishments were ordered to close. This closure also follows not long after thousands of employees laid off or temporarily unemployed.

Months after the coronavirus disease 2019 (Covid-19) hit the Philippines, many would agree that it is no longer a health concern but an economic problem. With travel, events and other restrictions, the economy sees a downhill slope affecting many of the Filipinos.

With a new year should have come a new beginning. That’s what Rene Milan of Tagum City had in mind when effective January 1, 2020, he resigned from his job as an executive assistant of a councilor in their city.

As a painter, he wanted to focus fulltime on being a visual artist. He had in mind scheduled art workshops, art classes, summer activities that he would mentor and so on. He risked leaving the good-paying job for his dream also in the hopes of still supporting his family.

“Everything was smooth until Covid-19 came and changed everything,” Milan said.

Before he was an executive assistant, he worked as a manager in a reconditioning plant of repossessed motorcycles for eight years. With those years dedicated to earning for his family, he might have thought it’s also time to pursue his dream. But with Covid-19 a few months after that decision, Milan shared they struggled.

“It was a really difficult time for us. We would even just depend on the ration goods given by the government. My savings had been used up. I’ve even questioned my decision of resigning from my job,” he said.

But as most fathers do, Milan continued to strive and found the barter community where he exchanged his painting completed during the quarantine with essential goods for the family.

He even attempted to apply for another job but the pandemic had already affected many establishments and there was not a single one hiring.

In the latest data of the Department of Labor and Employment (Dole-Davao Region), there are around 10,000 establishments affected by Covid-19. From these establishments, about 200,000 workers were affected by their partial or total closure.

Sectors greatly affected by this pandemic are the events and tourism sectors with travel restrictions and social distancing guidelines. While people are advised to stay at home, industries that invite people to gather start to weaken.

Mhea Macabenta is the owner of Getting Hitched Bridal Boutique in Davao City. It’s a gown and suits rental shop that opened in late 2016. They cater to clients in different parts of Mindanao. Before the pandemic, they would usually have three to five weddings in a month.

“Early this year, when events and large gatherings were canceled at the onset of the Covid-19 pandemic, we immediately felt the impact of the health crisis on our revenue. No social events, no weddings that meant no business for us also,” Macabenta shared.

She also added that after they attempted to salvage the business, they finally decided to sell the gowns and the suits.

In March this year, SunStar Davao published a report on the 80 to 100 percent loss incurred by the event organizing industry following the health crisis. As the city government released a regulation against the holding of huge events until December 31, 2020, the Davao Events Alliance Reform Group (Dear) called on the government for assistance.

“The event industry is really down right now. Everyone is in shock. We are still thinking about how to deal with this problem but we are positive that we can get over this as long as the government will help us,” Dear founder and Krishael’s Events and Concepts owner Ish Montenegro said in a previous interview.

With all these closures, the unemployment rate of Davao Region had jumped up to 17.9 percent as of April 2020 as compared to only 3.1 percent the same time of last year.

One of the people in the city who lost their jobs to Covid-19 is Emeliana Alvarez Halasan, a widow with five children. Before the pandemic, she would work different jobs as a carinderia helper, doing manicure and pedicure services, and a labandera. But with the quarantine, fewer and fewer people would hire her. Five of her six children already have families of their own but since some of them also lost their job to the pandemic, she helps with the day-to-day finances. She has a 17-year old senior high student and a 7-year-old grandchild under her care.

“It’s really difficult. I go from one person to another to borrow money just so we have something to eat but it’s still not enough. I’m just thankful that we received rationed goods from the government. If not, we wouldn’t have anything to eat because my children also lost their jobs,” Halasan shared.

To help people like Halasan, the City Government of Davao allotted 42,000 slots of temporary jobs. The Work for Davao project is an initiative targeted to provide emergency employment cash for individuals who were terminated, laid off, or with foreclosed business or offices due to the pandemic restrictions.

The program will hire qualified individuals by batches, with each batch to last for 10 days. They will be paid P396 daily. Halasan was one of the hired people for the first batch. She saw the post on Facebook and right away applied for a slot. She now works as one of the assistants at the Catalunan Pequeno Barangay Hall from June 22 to July 3.

Elmer Sandingay, an inventory specialist in a boutique in a mall here in the city, was also included in the first batch of Work for Davao. Their shop did not close but the management decided to only employ a limited fewer staff for the meantime as sales were still struggling. Sandingay is the current breadwinner in their family after his father died and some of his siblings already have families of their own. He earns for the medical maintenance of his mother and the education needs of his other siblings.

“I wanted to seek other jobs but no one was hiring. I was also afraid to be always out. What made it worse is that we’re only renting the place we live in. Although the owner of the house did not ask for our payment, we still have other bills to pay in the house. It’s a really difficult time,” Sandingay shared.

After hearing about the Work for Davao, he immediately sent his application online. He was very happy when he was included in the first batch. He was assigned to a daycare center to do gardening, cleaning, painting and repacking of relief goods for the parents of the daycare students. Even if for 10 days, Sandingay and Halasan are very much grateful for the opportunity and the salary they would get as it will already be a big help for their families.

In a webinar conference organized by the San Pedro College, Dr. Alaa Nimber Abukhalifeh, assistant professor of International Hospitality Management of Woosong University, South Korea, said the pandemic created havoc in the tourism sector because of travel restrictions and the expected global recession.

“The domestic hotel industry states their working capital and revenue showed a stiff fall in the balance sheets from March. With more causes of Coronavirus showing up the scenario, the business started to deteriorate around the first week of April 2020,” she added.

With the pandemic affecting most of the countries in the world, the overseas Filipino workers (OFW) find themselves in distress. Some resort to going home to their families risking the days or weeks of waiting for an available flight while others are still unsure whether or not they will still have jobs to go back to after all of this is done.

Although it's still a long shot, North Oil Company Qatar Gas Engineer Harthwell Capistrano remains optimistic that the demand for OFWs in other countries will remain.

“There will be countries that will still need us, especially in the healthcare industry. The demand will actually depend on the industry where you are in but it will still be there,” he said in the same webinar conference.

The global pandemic continues to pose a threat to everyone across the globe. As it’s no longer just a health concern, many see themselves struggling financially while the economy of their respective countries plummets. But like all economic recessions in the past, one can only hope that it will come to an end sooner than later.