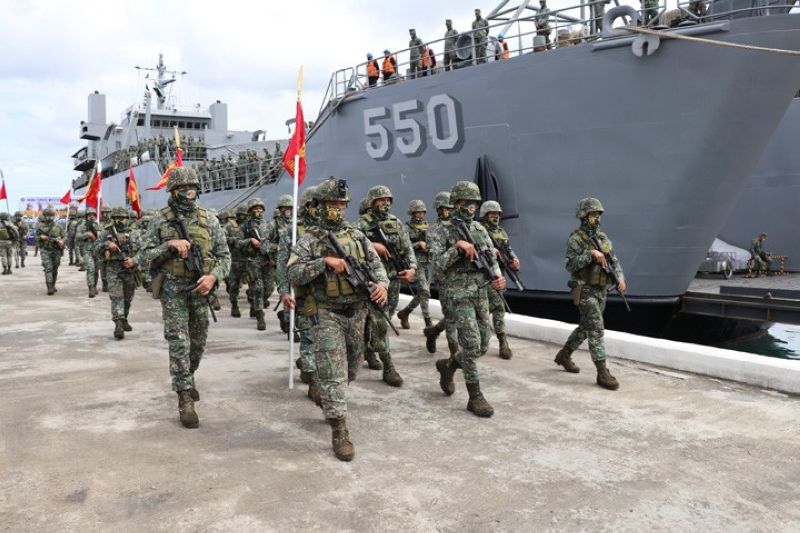 ZAMBOANGA. Lieutenant General Cirilito Sobejana, commander of the Western Mindanao Command (Wesmincom), congratulated the troops of the Marine Battalion Landing team (MBLT)-9 for their accomplishments while deployed in the area of responsibility of Wesmincom. A photo handout shows the MBLT-9 troops marching to board the BRP-Bacolod City en route to Manila for a six-month retraining and refurbishing. (SunStar Zamboanga)

LIEUTENANT General Cirilito Sobejana, commander of the Western Mindanao Command (Wesmincom), expressed his utmost gratitude to the officers and men of the Marine Battalion Landing Team-9 (MBLT 9) for the selfless service they rendered in the Area of Responsibility (AOR) of Wesmincom.

Sobejana led Saturday, June 27, the send-off ceremony of the MBLT-9 at the Majini Pier of the Naval Station Romulo Espaldon in this city en route to Manila for retraining and refurbishing.

The retraining and refurbishment will be held for six months at the Philippine Marine Corps (PMC) headquarters in Fort Bonifacio, Taguig City, where they will retrain as well as revisit the Corps’ TTPs and share the learning from the long exposure in the field.

Ideally as programmed by the PMC, each battalion should be recalled for retraining every five years deployment but, due to the necessity of the service, may reach up to 10 years. The MBLT-9 was deployed for almost 10 years in the AOR of Wesmincom.

The MBLT 9 was deployed in Wesmincom AOR in 2010 wherein their areas of deployment were Sulu, Zamboanga City, and the last four years were spent in Tawi-Tawi.

Sobejana emphasized that the MBLT-9 made a very good job while deployed in the island province of Tawi-Tawi.

Sobejana thanked the MBLT-9 for the various contributions to the mission accomplishment of Wesmincom and the Armed Forces of the Philippines (AFP).

Sobejana said that the reason for the AFP’s existence that it is not only to wage war but also to win the peace.

“Winning the peace cannot be done through arms and ammunitions, it can be done through non-military actions. That’s why we need to learn a lot of things because it is expected upon us to be multi-functional. With those tasks ahead of us, we must be prepared.”

Sobejana said as he congratulated the Philippine Marine Corps (PMC) for coming up with a very responsive program on the retraining and refurbishment of each battalion.

He emphasized that the program does not only give the soldiers time to relax but more so on making their survivability much higher.

Meanwhile, the MBLT-9 will be further trained to form part of the amphibious brigade organized by PMC.

Aside from Sobejana, top officials of Wesmincom and Naval Forces Western Mindanao witnessed the send-off ceremony.