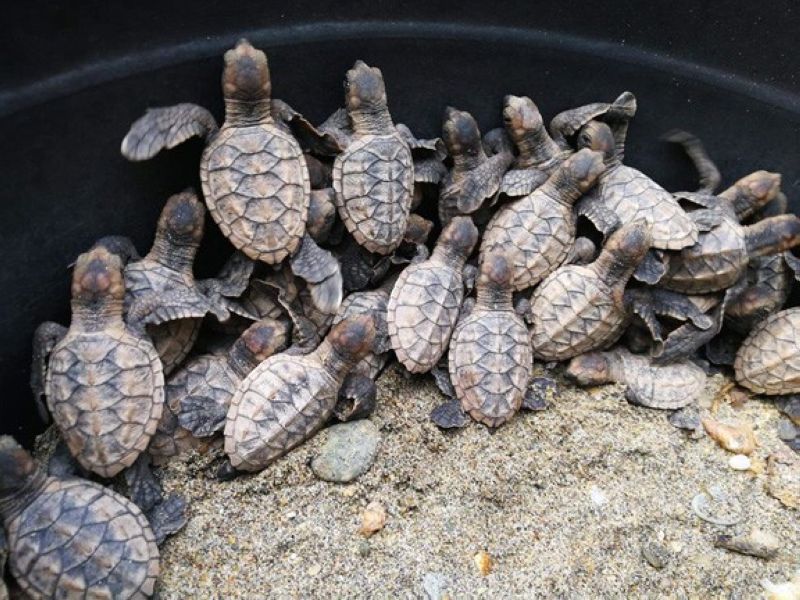 Environment officials lead the recent release of 38 hatchlings of Hawksbill Turtles at the shore of Alegria village in Baliguian, Zamboanga del Norte. A photo handout shows the hatchlings that were send back to it natural habitat. (SunStar Zamboanga)

Rosevirico Tan, DENR regional information officer, said that the hatchlings of Hawksbill Turtles were released at the shore of Alegria village in Baliguian, Zamboanga del Norte.

Tan said that Alegria Village Chief Cecilia Asani and Amad Maguindan, a local fisherman, joined the CENRO-Siocon officials in releasing the hatchlings to its natural habitat.

Tan said it was Maguindan who discovered the hatchlings at an identified nesting site previously fenced and secured by CENRO-Siocon to protect it from scavengers and stray animals.

Maguindan reported his discovery to Asani, who in turn relayed the information to CENRO-Siocon.

Tan said that the Hawksbill Sea Turtles are classified as “critically endangered” by the International Union of the Conservation of Nature (IUCN).

Study shows a crisis category that Hawksbill Sea Turtle, among other things, are characterized by having sustained an observed, estimated, inferred or suspected reduction of at least 80 percent over the last 10 years.

The CENRO-Siocon has intensified the conduct of information, education and communication campaign in coastal communities to mobilize them to help protect and conserve the environment.

The information campaign is in line with the continuing implementation of the 10 priority programs of DENR Secretary Roy Cimatu, specifically under enhanced biodiversity conservation and scaling up of coastal and marine ecosystems. (SunStar Zamboanga)